Ball’s Pyramid is an erosional remnant of a shield volcano and caldera that formed about 7 million years ago. It lies 20 kilometres (12 mi) southeast of Lord Howe Island in the Pacific Ocean. It is 562 metres (1,844 ft) high, while measuring only 1,100 metres (3,600 ft) in length and 300 metres (980 ft) across, making it the tallest volcanic stack in the world. Ball’s Pyramid is part of the Lord Howe Island Marine Park in Australia 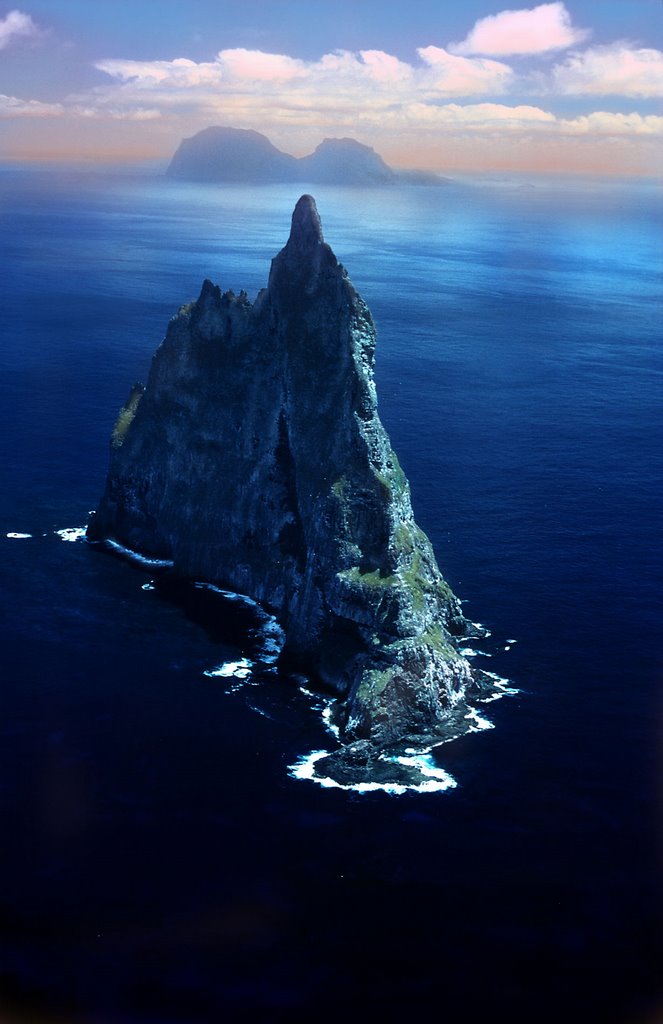 The pyramid is named after Lieutenant Henry Lidgbird Ball, who discovered it in 1788. On the same voyage, Ball also discovered Lord Howe Island.

In the book The Voyage Of Governor Phillip To Botany Bay With An Account Of The Establishment Of The Colonies Of Port Jackson And Norfolk Island (1789), Arthur Phillip gives this description of Ball’s pyramid, before describing birds and other biota present:

There lies about four miles from the south-west part of the pyramid, a dangerous rock, which shows itself a little above the surface of the water, and appears not to be larger than a boat. Lieutenant Ball had no opportunity of examining whether there is a safe passage between them or not. The island is in the form of a crescent, the convex side towards the north-east. Two points at first supposed to be separate islands, proved to be high mountains on its south-west end, the southernmost of which was named Mount Gower, and the other Mount Lidgbird; between these mountains there is a very deep valley, which obtained the name of Erskine Valley; the south-east point was called Point King, and the north-west point, Point Phillip. The land between these two points forms the concave side of the island facing the south-west, and is lined with a sandy beach, which is guarded against the sea by a reef of coral rock, at the distance of half a mile from the beach, through which there are several small openings for boats; but it is to be regretted that the depth of water within the reef no where exceeds four feet. They found no fresh water on the island…

The first person to go ashore is believed to have been Henry Wilkinson, a geologist at the New South Wales Department of Mines, in 1882. 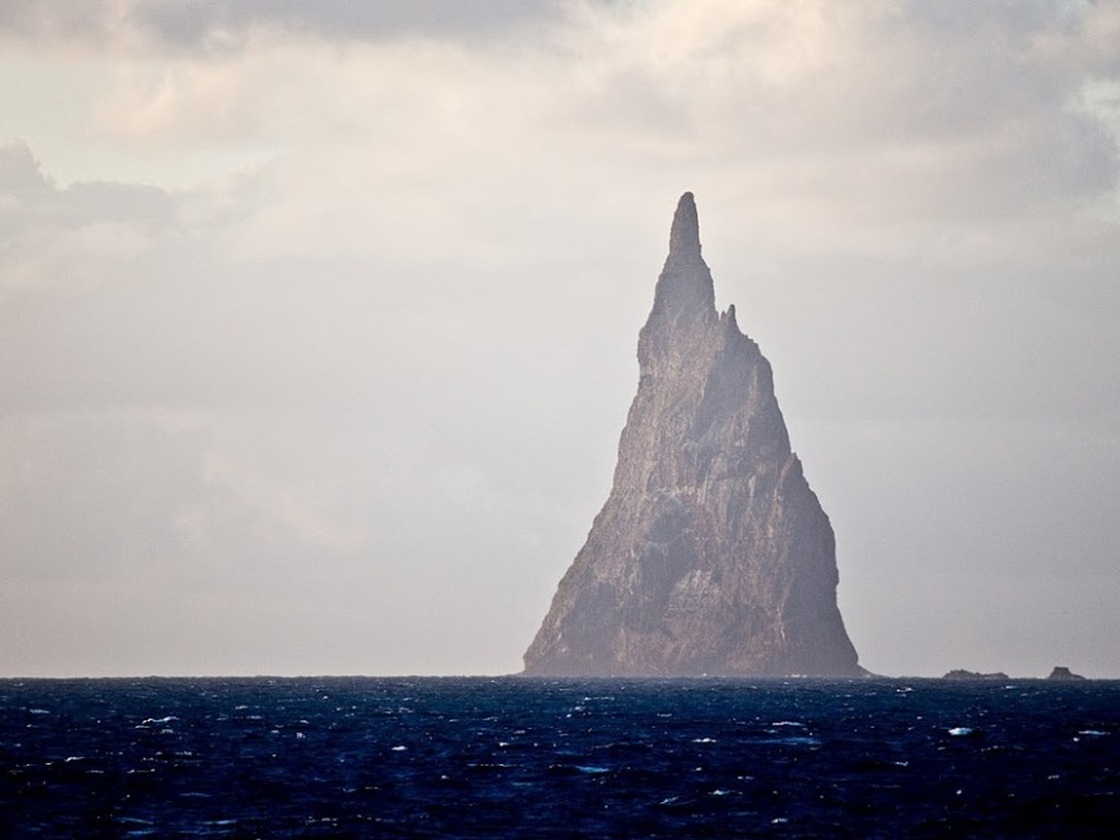 In 1964 a Sydney team, which included adventurer Dick Smith and other members of the Scouting movement, attempted to climb to the summit of the pyramid. However, they were forced to turn back on the fifth day as they had ran short of food and water. The first successful climb to the summit was made on 14 February 1965 by a team of climbers from the Sydney Rock Climbing Club, consisting of Bryden Allen, John Davis, Jack Pettigrew and David Witham. In 1979, Smith returned to the pyramid, together with climbers John Worrall and Hugh Ward. They successfully reached the summit and unfurled a flag of New South Wales provided to them by Premier Neville Wran, declaring the island Australian territory (a formality which it seems had not previously been done). 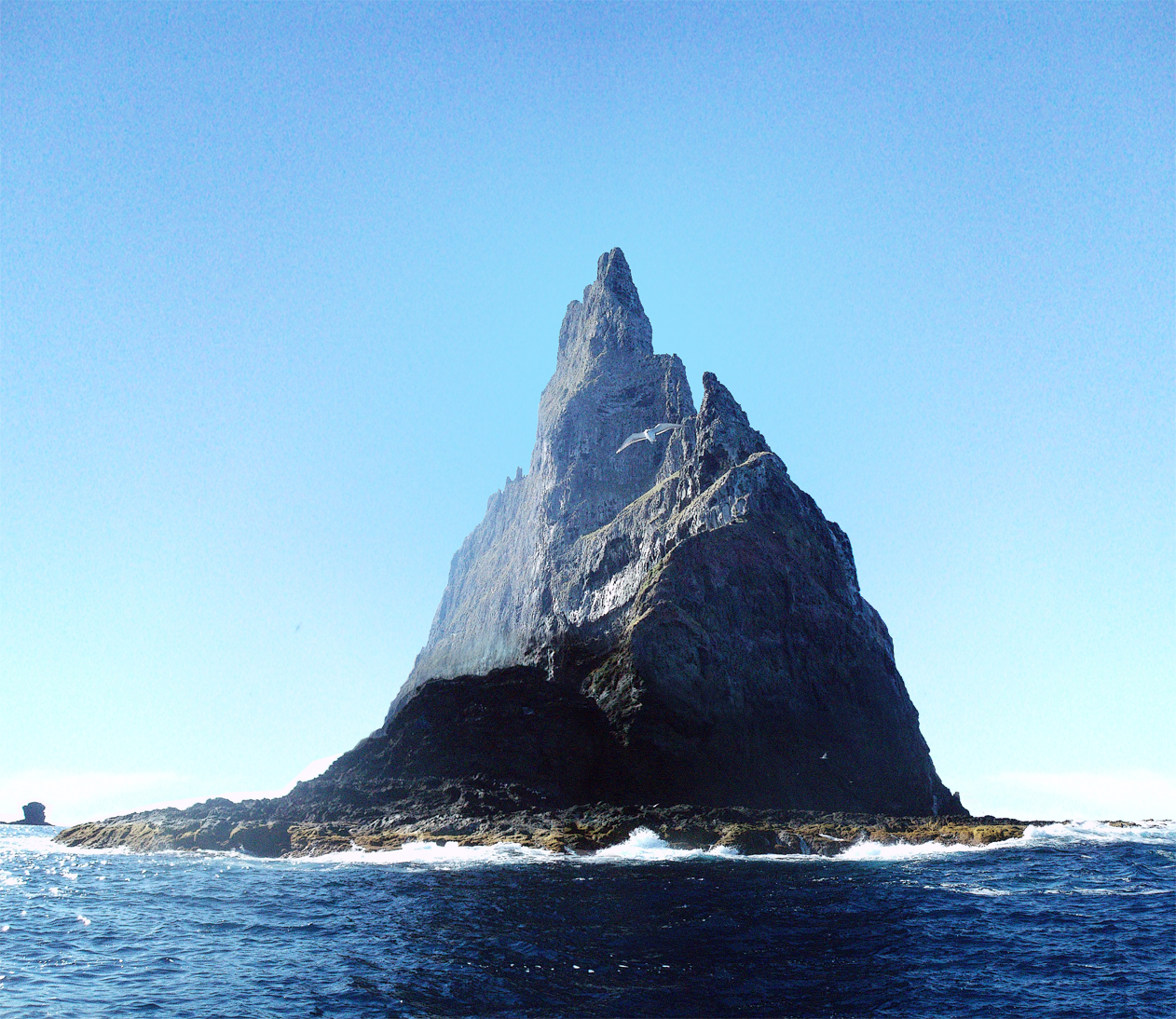 Ball’s Pyramid has a few satellite islets. Observatory Rock and Wheatsheaf Islet lie about 800 metres (2,600 ft) west-northwest and west-southwest respectively, of the western extremity of Ball’s Pyramid. Southeast Rock is a pinnacle located about 3.5 kilometres (2.2 mi) southeast of Ball’s Pyramid.

Ball’s Pyramid is positioned in the centre of a submarine shelf. The shelf is 20 kilometres (12 mi) in length and averages 10 kilometres (6.2 mi) in width and lies under an average depth of 50 metres (160 ft) of water. It is separated by a 500 metres (1,600 ft) deep, submarine canyon from another shelf on which Lord Howe Island is located. The cliffs of the stack continue under the water surface to the level of shelf.