On 20 August 1944, an American cargo ship named SS Richard Montgomery carrying huge amount of explosives, meant for use in the ongoing Second World War, ran aground on a sandbank in the Thames Estuary, near the town of Sheerness, in England. A salvage operation was launched, but before the ship’s cargo could be recovered in its entirety, the ship broke in half and sank.

To this day, the wreck of SS Richard Montgomery remain in place, lying in the shallow waters of the estuary about 2.5 km from Sheerness. The masts of the ship can still be seen above water. Buoys float near her carrying warning signs that state: “Danger – Unexploded ammunition. Do not approach or board this wreck.”

SS Richard Montgomery was a Liberty ship—a type of low-cost, cargo ship that was mass-produced in the United States during World War II. A Liberty ship could carry troops as well as cargo, and could be constructed in as few as 42 days. Altogether, some 2,710 Liberty ships were built for the war effort, constituting the largest number of ships ever produced of a single design.

Named after an Irish soldier who was killed during the American Revolution, SS Richard Montgomery set sail from Hog Island, Philadelphia, loaded with more than 6,000 tons of munitions. She travelled from the Delaware River to the Thames Estuary, then anchored while awaiting the formation of a convoy which would then travel to France. 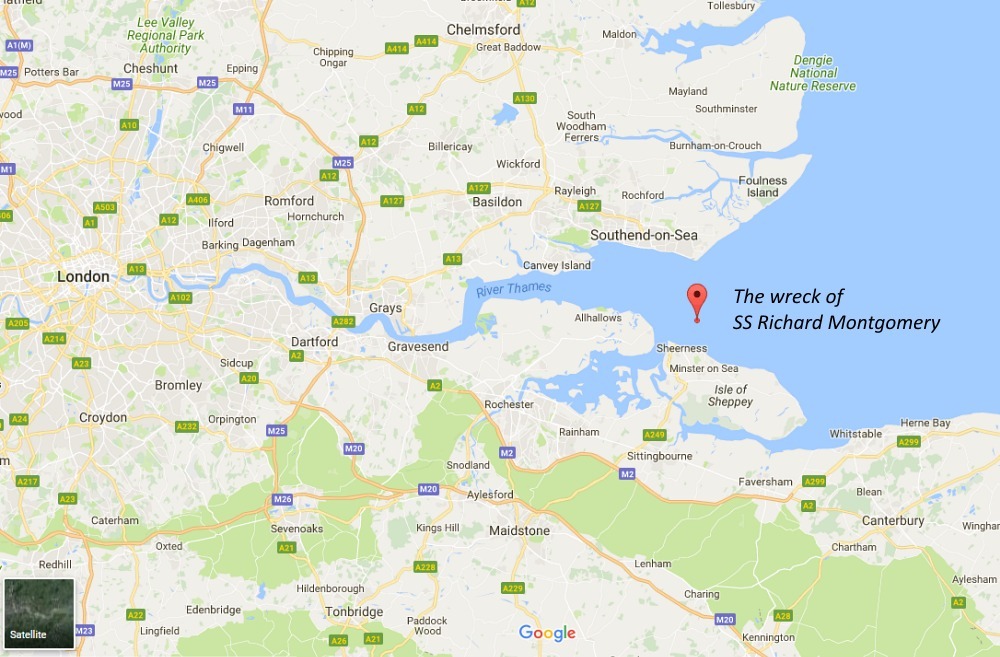 It was while waiting in the Thames Estuary for the convoy to arrive, SS Richard Montgomery started to drift towards the sandbank, unknown to the ship’s captain who was reportedly asleep at the time. For reasons unknown, the ship’s chief officer on duty failed to alert the captain and the ship ran aground. Once the tide went out, the weight of the ship’s cargo became too much for her hull to bear and the ship broke her back. She settled on the sand banks near the Isle of Sheppey, 2.5 km from the coast of Sheerness.

According to some estimate, the ship still contains more than 9,000 bombs including 286 giant two-thousand pound ‘blockbuster’ bombs, 4,439 one-thousand pound bombs of various types, 1,925 five-hundred pound bombs and 2,815 cluster bombs. The final item is the most worrying of all because, as reported by BBC, these bombs are usually transported with their fuses in place, leaving them more prone to detonation. All in all, there are more than 1,400 tons worth of TNT in the ship. 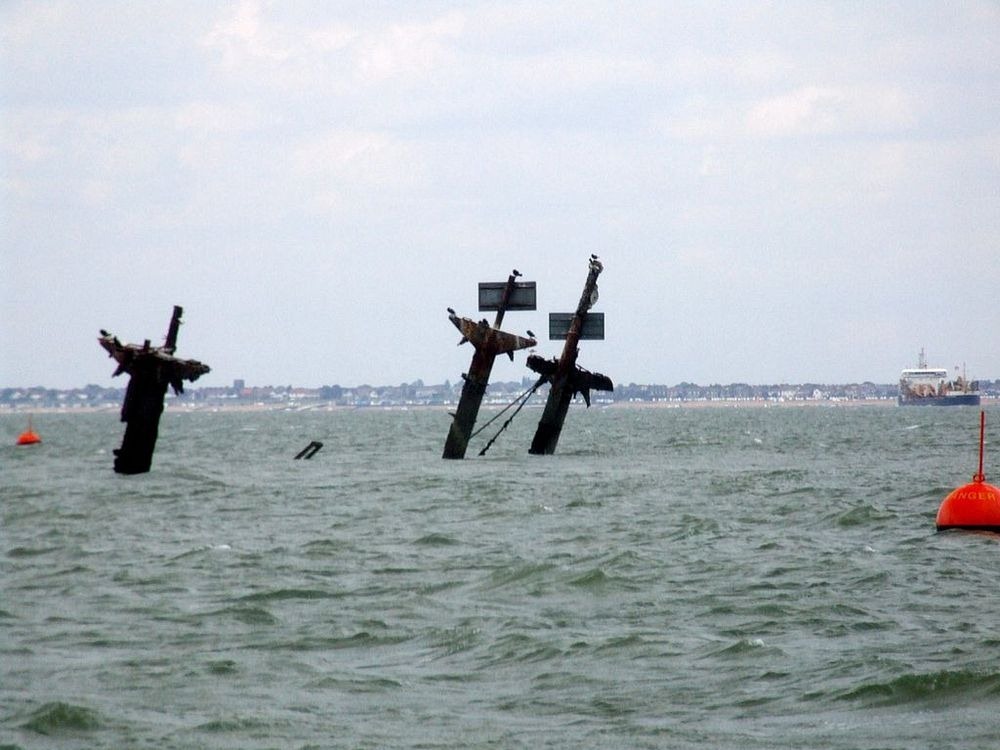 One analysis suggest that spontaneous detonation of the entire cargo would hurl a column of water and debris 3 km into the air, and send a tsunami up the Thames. The shockwave from the blast would damage buildings for miles around.

Although the likelihood of the ship exploding, some experts believe, is low as long as no other ship collide with the wreck, recent surveys confirm that the wreck is gradually disintegrating which could lead to a sudden collapse triggering detonation of some, if not all of the explosives. 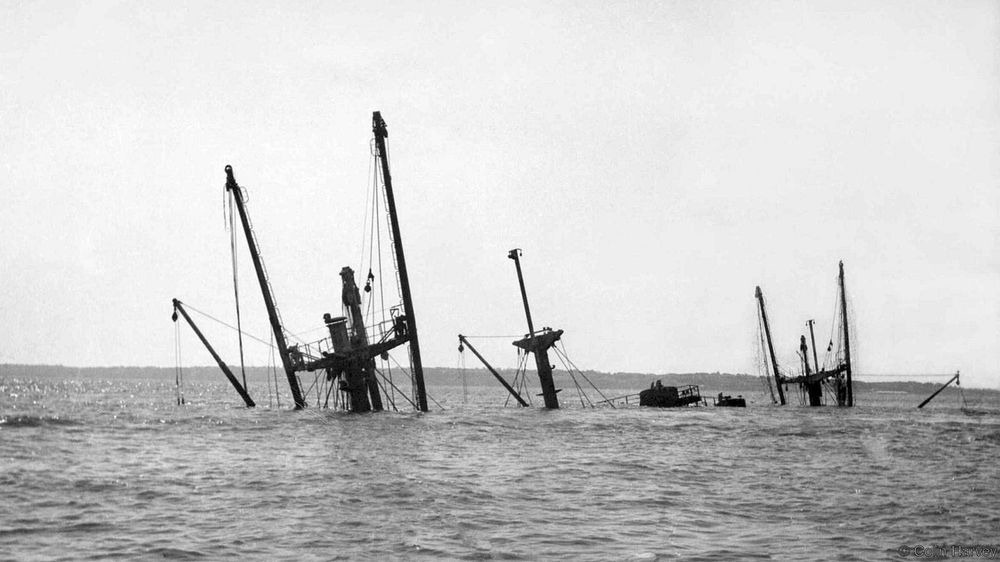 The hazardous wreck which lies in the middle of one of the UK’s busiest shipping lanes is surrounded by an 800 meter exclusion zone and monitored 24 hours a day by the Medway Ports authority, but there are concerns that it’s not as well protected as the authorities claim. Over the last few decades, there have been at least 22 near-misses with ships. More recently, a paddle-boarder rowed out to the site of the wreck and uploaded a photo of himself on Facebook leaning against one of the vessel’s masts creating an uproar in social media. 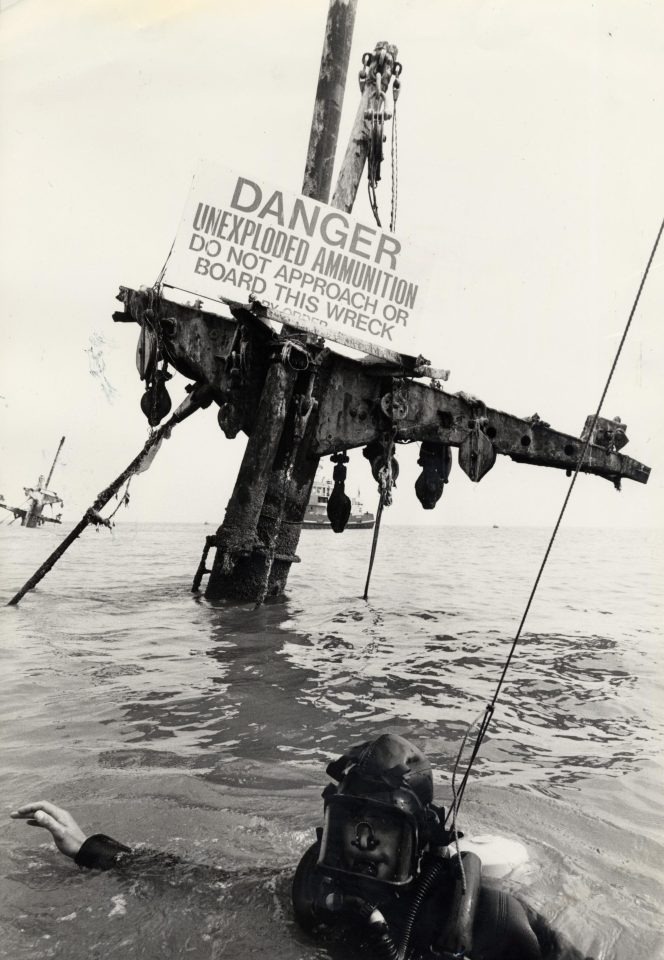 According to some experts, the careful removal of the munitions is the only serious option, but authorities are afraid to touch the wreck. A similar operation was attempted in 1967 to neutralize the contents of a Polish ship named Kielce sunk in the English Channel. The resulting explosion created a 20-foot-deep crater in the seabed, and rocked the region with a force that was equivalent to an earthquake measuring 4.5 on the Richter scale. Kielce was located much further out in the sea than SS Richard Montgomery is and contained just a fraction of the load of explosives SS Richard Montgomery contains. While SS Richard Montgomery is still far enough away to cause any direct harm to the local population, the explosion would generate a four-foot tall rogue wave that could flood and wreck nearby communities.