The Leaning Tower of Pisa (Italian: Torre pendente di Pisa) or simply the Tower of Pisa (Torre di Pisa) is the campanile, or freestanding bell tower, of the cathedral of the Italian city of Pisa, known worldwide for its unintended tilt to one side. It is situated behind the Cathedral and is the third oldest structure in Pisa’s Cathedral Square (Piazza del Duomo) after the Cathedral and the Baptistry. The tower’s tilt began during construction, caused by an inadequate foundation on ground too soft on one side to properly support the structure’s weight. The tilt increased in the decades before the structure was completed, and gradually increased until the structure was stabilized (and the tilt partially corrected) by efforts in the late 20th and early 21st centuries. 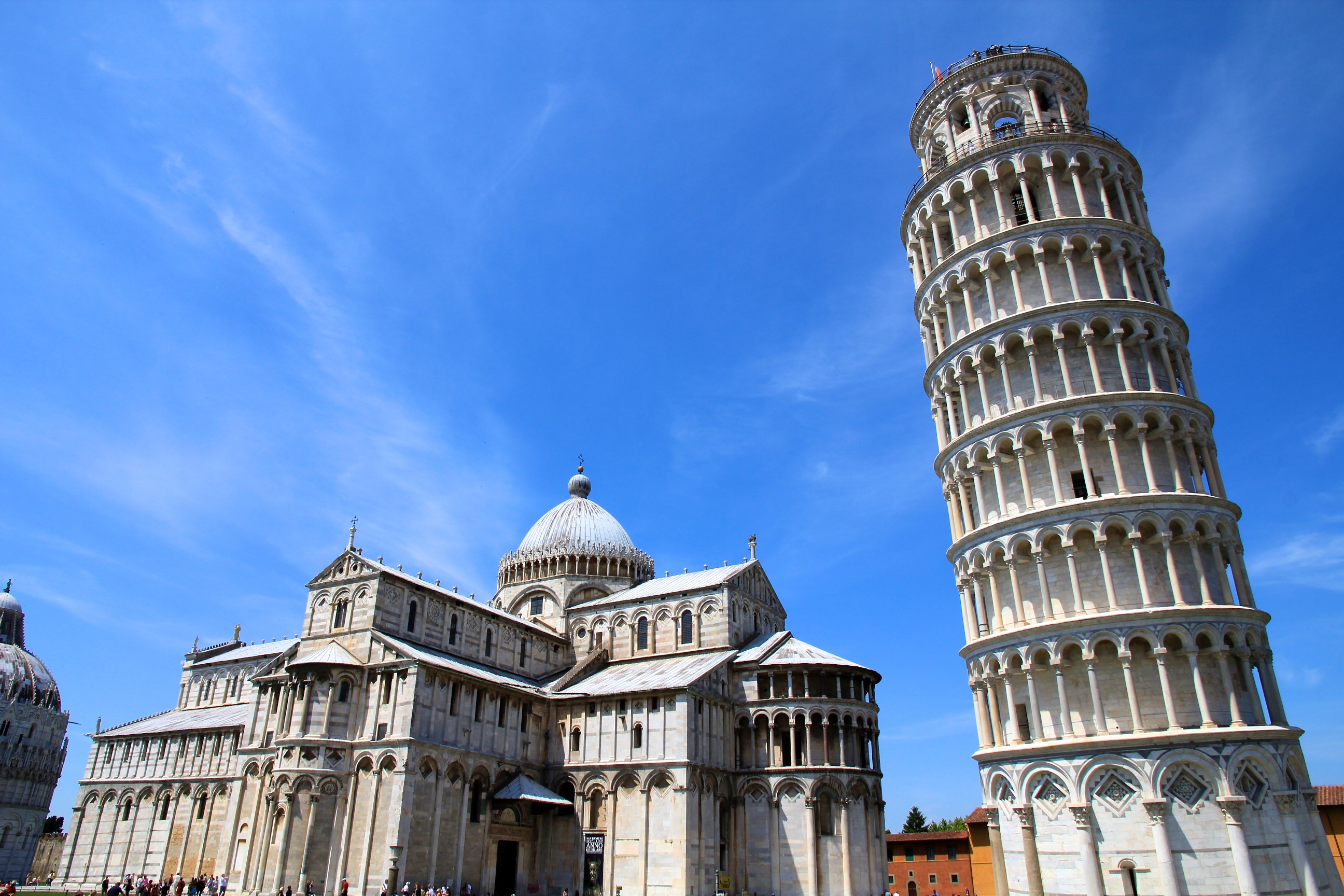 There has been controversy about the real identity of the architect of the Leaning Tower of Pisa. For many years, the design was attributed to Guglielmo and Bonanno Pisano, a well-known 12th-century resident artist of Pisa, famous for his bronze casting, particularly in the Pisa Duomo. Bonanno Pisano left Pisa in 1185 for Monreale, Sicily, only to come back and die in his home town. A piece of cast with his name was discovered at the foot of the tower in 1820, but this may be related to the bronze door in the façade of the cathedral that was destroyed in 1595. However, recent studies seem to indicate Diotisalvi as the original architect due to the time of construction and affinity with other Diotisalvi works, notably the bell tower of San Nicola and the Baptistery, both in Pisa. However, he usually signed his works and there is no signature by him in the bell tower which leads to further speculation.

Construction of the tower occurred in three stages across 199 years. Work on the ground floor of the white marble campanile began on August 14, 1173, during a period of military success and prosperity. This ground floor is a blind arcade articulated by engaged columns with classical Corinthian capitals.

The tower began to sink after construction had progressed to the second floor in 1178. This was due to a mere three-metre foundation, set in weak, unstable subsoil, a design that was flawed from the beginning. Construction was subsequently halted for almost a century, because the Republic of Pisa was almost continually engaged in battles with Genoa, Lucca, and Florence. This allowed time for the underlying soil to settle. Otherwise, the tower would almost certainly have toppled. In 1198 clocks were temporarily installed on the third floor of the unfinished construction.

In 1272 construction resumed under Giovanni di Simone, architect of the Camposanto. In an effort to compensate for the tilt, the engineers built upper floors with one side taller than the other. Because of this, the tower is actually curved. Construction was halted again in 1284, when the Pisans were defeated by the Genoans in the Battle of Meloria.

The seventh floor was completed in 1319. It was built by Tommaso di Andrea Pisano, who succeeded in harmonizing the Gothic elements of the bell-chamber with the Romanesque style of the tower. There are seven bells, one for each note of the musical major scale. The largest one was installed in 1655. The bell-chamber was finally added in 1372.

After a phase (1990–2001) of structural strengthening, the tower is currently undergoing gradual surface restoration, in order to repair visible damage, mostly corrosion and blackening. These are particularly pronounced due to the tower’s age and its exposure to wind and rain.

Galileo Galilei is said to have dropped two cannonballs of different masses from the tower to demonstrate that their speed of descent was independent of their mass. However, this is considered an apocryphal tale, its only source being Galileo’s secretary.

During World War II, the Allies discovered that the Germans were using the tower as an observation post. A U.S. Army sergeant sent to confirm the presence of German troops in the tower was impressed by the beauty of the cathedral and its campanile, and thus refrained from ordering an artillery strike, sparing it from destruction.

On February 27, 1964, the government of Italy requested aid in preventing the tower from toppling. It was, however, considered important to retain the current tilt, due to the role that this element played in promoting the tourism industry of Pisa.

A multinational task force of engineers, mathematicians, and historians gathered on the Azores islands to discuss stabilisation methods. It was found that the tilt was increasing in combination with the softer foundations on the lower side. Many methods were proposed to stabilise the tower, including the addition of 800 tonnes of lead counterweights to the raised end of the base.

In 1987 the tower was declared as part of the Piazza del Duomo UNESCO World Heritage Site along with the neighbouring cathedral, baptistery and cemetery.

On January 7, 1990, after over two decades of stabilisation studies, and spurred by the abrupt collapse of the Civic Tower of Pavia in 1989, the tower was closed to the public. The bells were removed to relieve some weight, and cables were cinched around the third level and anchored several hundred meters away. Apartments and houses in the path of the tower were vacated for safety. The final solution to prevent the collapse of the tower was to slightly straighten the tower to a safer angle, by removing 38 cubic metres (1,342 cubic feet) of soil from underneath the raised end. The tower was straightened by 45 centimetres (17.7 inches), returning to its 1838 position. After a decade of corrective reconstruction and stabilization efforts, the tower was reopened to the public on December 15, 2001, and was declared stable for at least another 300 years.

In May 2008, after the removal of another 70 metric tons (77 short tons) of ground, engineers announced that the Tower had been stabilized such that it had stopped moving for the first time in its history. They stated it would be stable for at least 200 years. 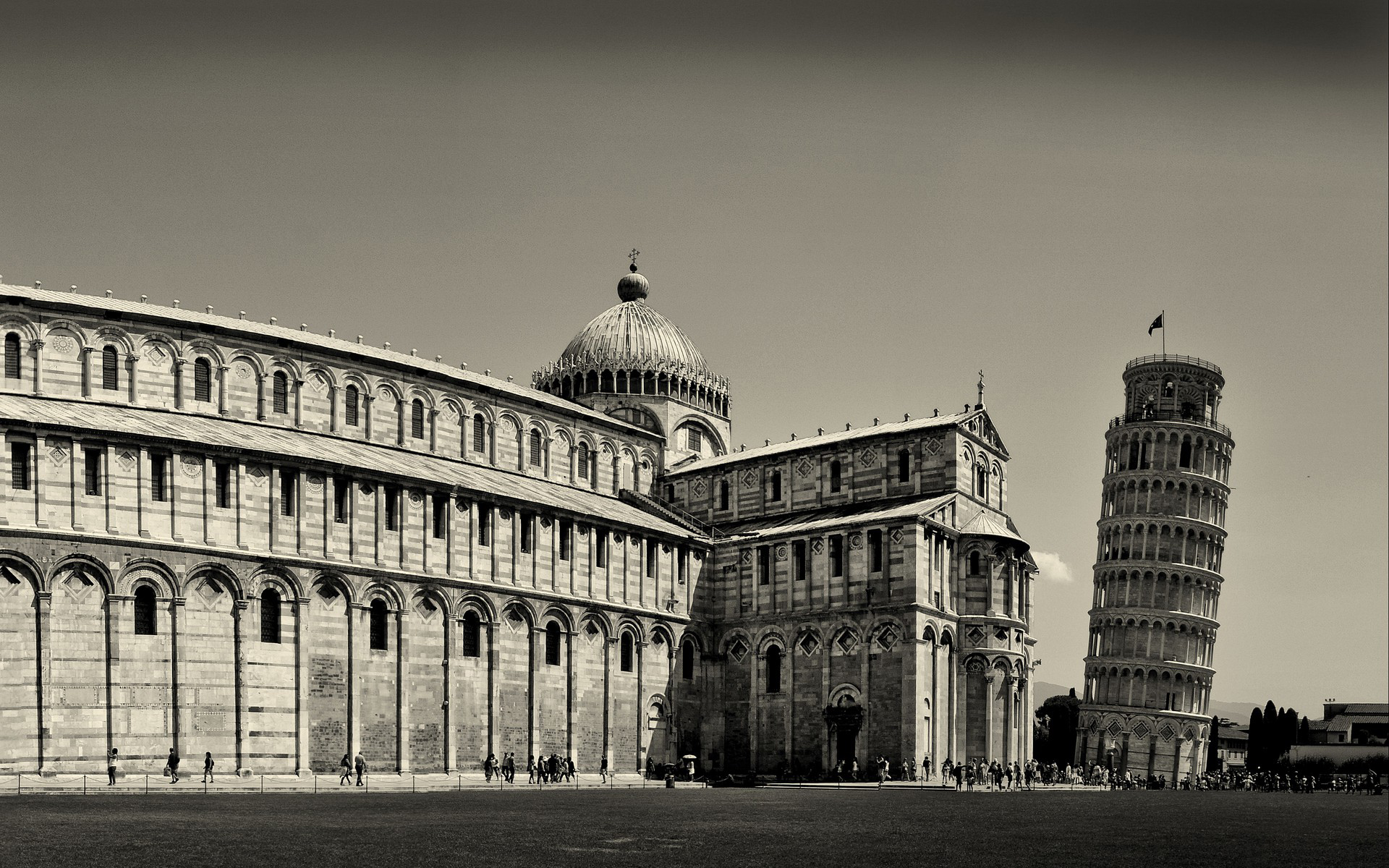 Two German churches have challenged the tower’s status as the world’s most lop-sided building: the 15th-century square Leaning Tower of Suurhusen and the 14th-century bell tower in the town of Bad Frankenhausen. Guinness World Records measured the Pisa and Suurhusen towers, finding the former’s tilt to be 3.97 degrees. In June 2010, Guinness World Records certified the Capital Gate building in Abu Dhabi, UAE as the “World’s Furthest Leaning Man-made Tower”. The Capital Gate tower has an 18-degree slope, almost five times more than the Pisa Tower; however the Capital Gate tower has been deliberately engineered to slant. The Leaning Tower of Wanaka in New Zealand, also deliberately built, leans at 53 degrees to the ground.

About the 5th bell: The name Pasquareccia comes from Easter, because it used to ring on Easter day. However, this bell is older than the bell-chamber itself, and comes from the tower Vergata in Palazzo Pretorio in Pisa, where it was called La Giustizia (The Justice). The bell was tolled to announce executions of criminals and traitors, including Count Ugolino in 1289. A new bell was installed in the bell tower at the end of the 18th century to replace the broken Pasquareccia.