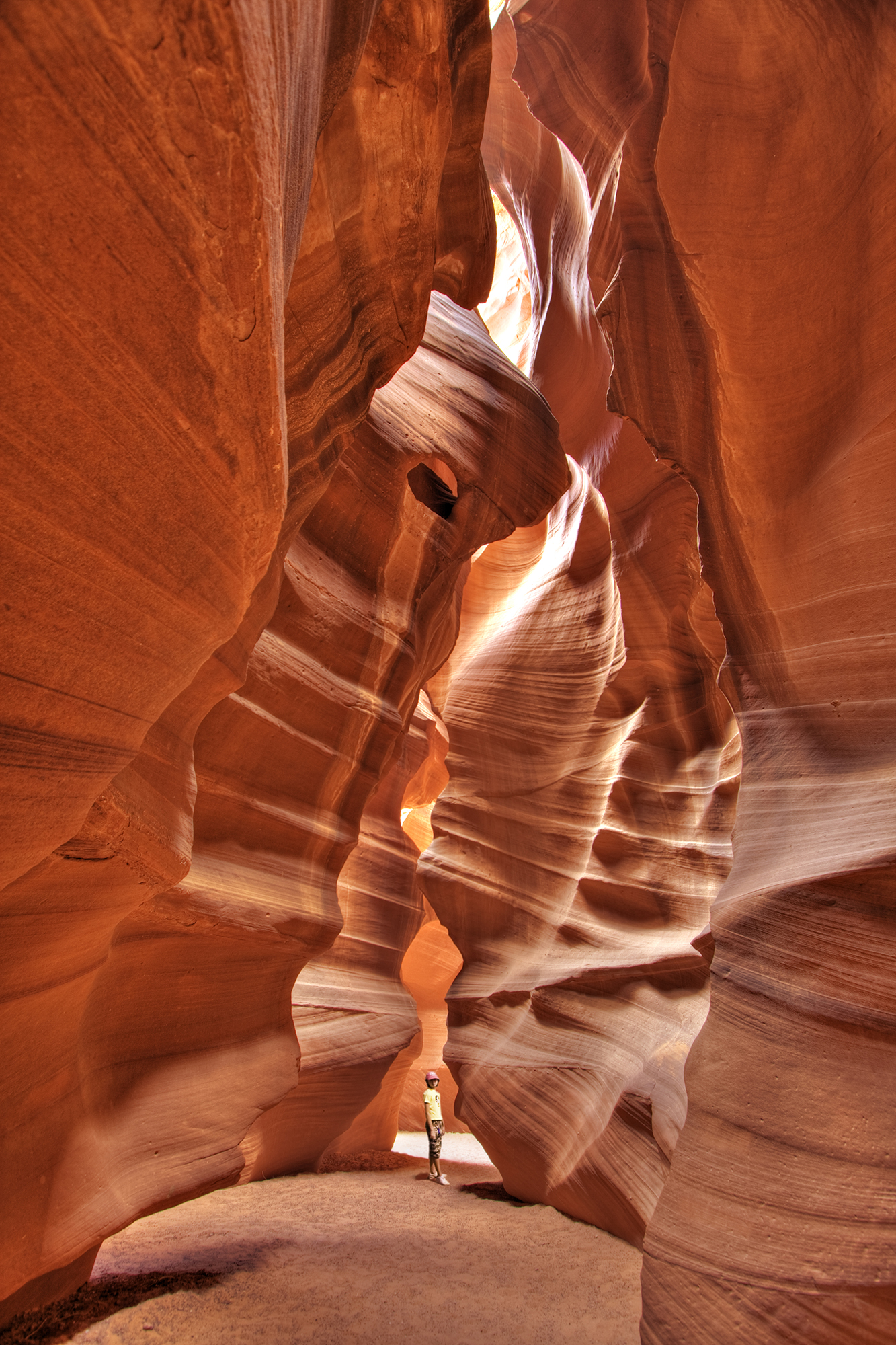 Antelope Canyon was formed by erosion of Navajo Sandstone, primarily due to flash flooding and secondarily due to other sub-aerial processes. Rainwater, especially during monsoon season, runs into the extensive basin above the slot canyon sections, picking up speed and sand as it rushes into the narrow passageways. Over time the passageways eroded away, making the corridors deeper and smoothing hard edges in such a way as to form characteristic ‘flowing’ shapes in the rock.

Flooding in the canyon still occurs. A flood occurred on October 30, 2006 that lasted 36 hours, and caused the Tribal Park Authorities to close Lower Antelope Canyon for five months.

Antelope Canyon is a popular location for photographers and sightseers, and a source of tourism business for the Navajo Nation. It has been accessible by permit only since 1997, when the Navajo Tribe made it a Navajo Tribal Park. Photography within the canyons is difficult due to the wide exposure range (often 10 EV or more) made by light reflecting off the canyon walls. 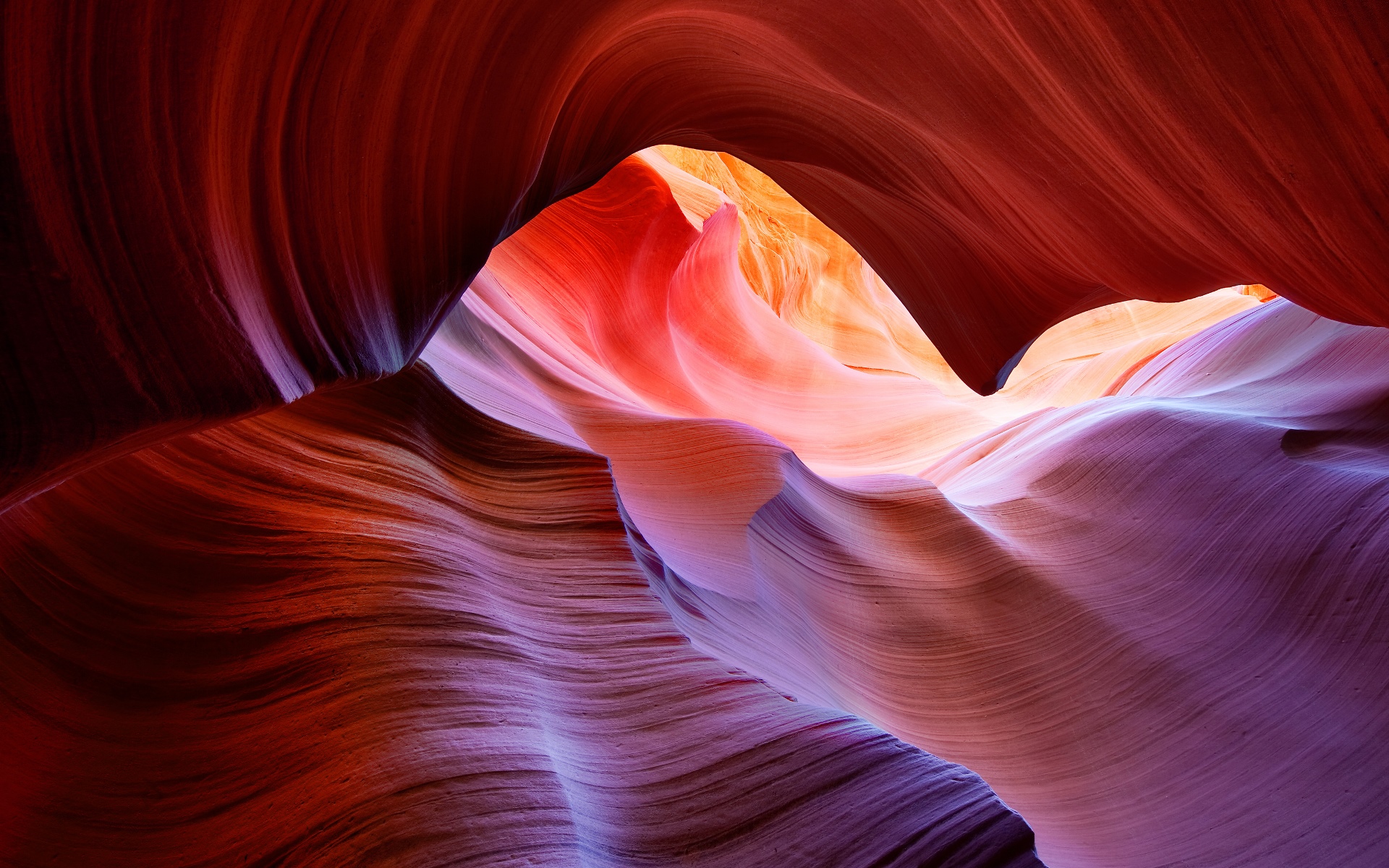 Upper Antelope Canyon is called Tsé bighánílíní, “the place where water runs through rocks” by the Navajo. It is the most frequently visited by tourists, due to two considerations. First, its entrance and entire length are at ground level, requiring no climbing. Second, beams (shafts of direct sunlight radiating down from openings in the top of the canyon) are much more common in Upper than in Lower. Beams occur most often in the summer months, as they require the sun to be high in the sky. Winter colors are a little more muted like the photo displayed here. Summer months provide two types of lighting. Light beams start to peek into the canyon March 15 and disappear October 7 each year.

Lower Antelope Canyon, called Hazdistazí, or “spiral rock arches” by the Navajo, is located a few kilometers away. Prior to the installation of metal stairways, visiting the canyon required climbing along pre-installed ladders in certain areas. Even following the installation of stairways, it is a more difficult hike than Upper Antelope—it is longer, narrower in spots, and even footing is not available in all areas. At the end, the climb out requires several flights of stairs.

Despite these limitations, Lower Antelope Canyon draws a considerable number of photographers, though casual sightseers are much less common there than in Upper.

The lower canyon is in the shape of a “V” and shallower than the Upper Antelope. Lighting is better in the early hours and late afternoon. 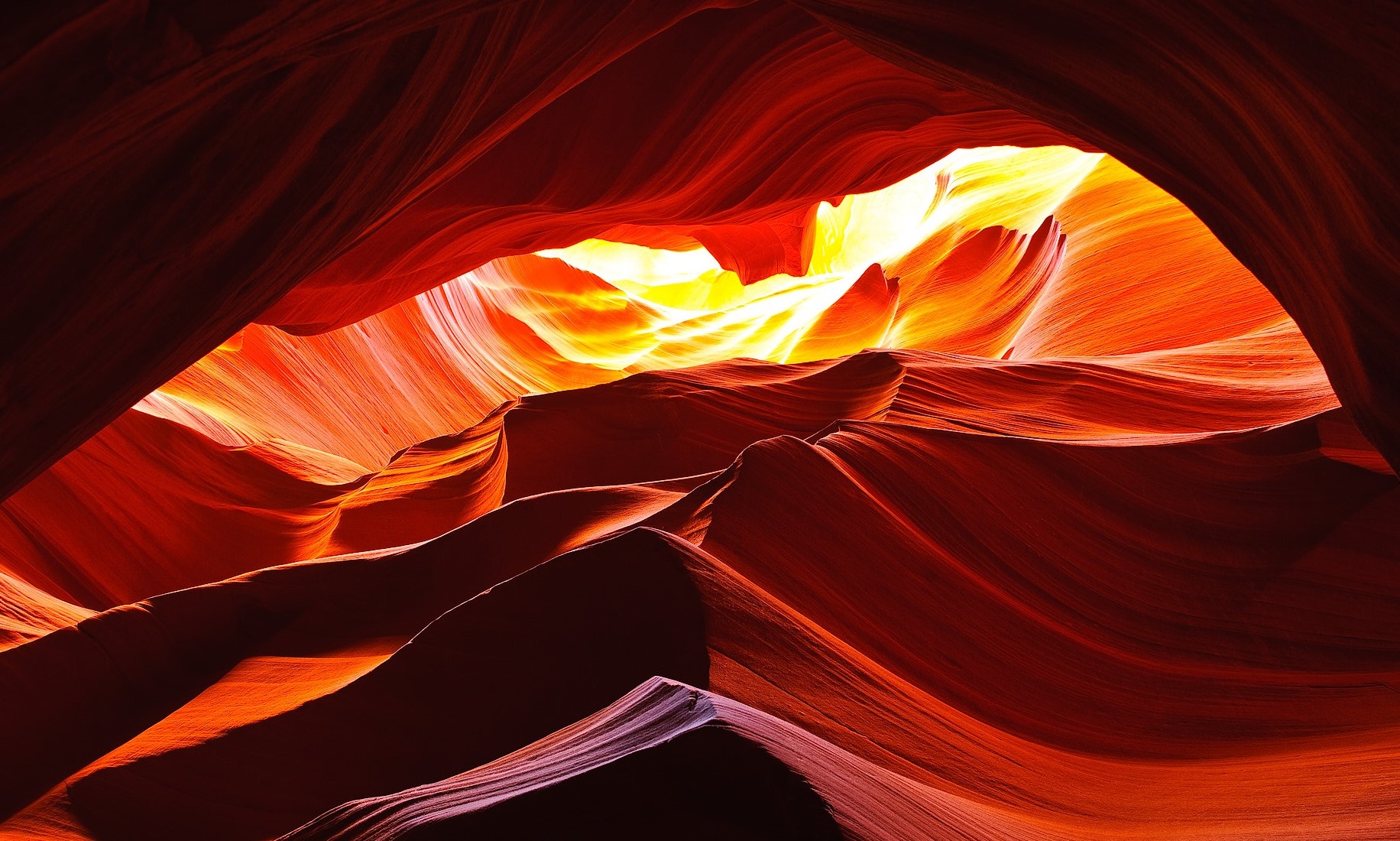 Antelope Canyon is visited exclusively through guided tours, in part because rains during monsoon season can quickly flood the canyon. Rain does not have to fall on or near the Antelope Canyon slots for flash floods to whip through, as rain falling dozens of miles away ‘upstream’ of the canyons can funnel into them with little prior notice. On August 12, 1997, eleven tourists, including seven from France, one from the United Kingdom, one from Sweden and two from the United States, were killed in Lower Antelope Canyon by a flash flood. Very little rain fell at the site that day, but an earlier thunderstorm had dumped a large amount of water into the canyon basin, seven miles upstream. The lone survivor of the flood was tour guide Francisco “Poncho” Quintana, who had prior swift-water training. At the time, the ladder system consisted of amateur-built wood ladders that were swept away by the flash flood. Today, ladder systems have been bolted in place, and deployable cargo nets are installed at the top of the canyon. At the fee booth, a NOAA Weather Radio from the National Weather Service and an alarm horn are stationed. 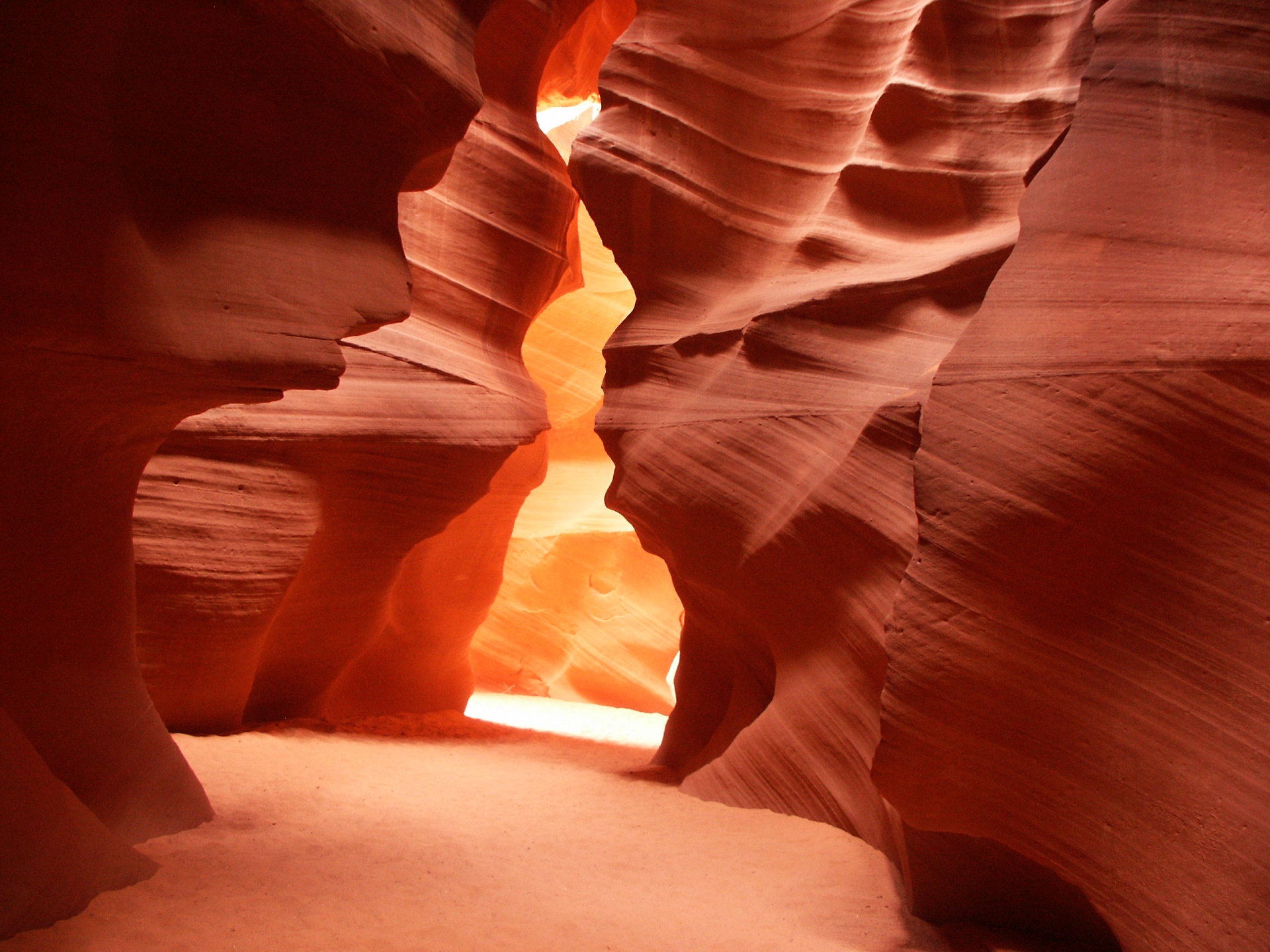 Despite improved warning and safety systems, the risks of injuries from flash floods still exist. On July 30, 2010, several tourists were stranded on a ledge when two flash floods occurred at the Upper Antelope Canyon. Some of them were rescued and some had to wait for the flood waters to recede. There were reports that a woman and her 9-year-old son were injured as they were washed away downstream, but no fatalities were reported 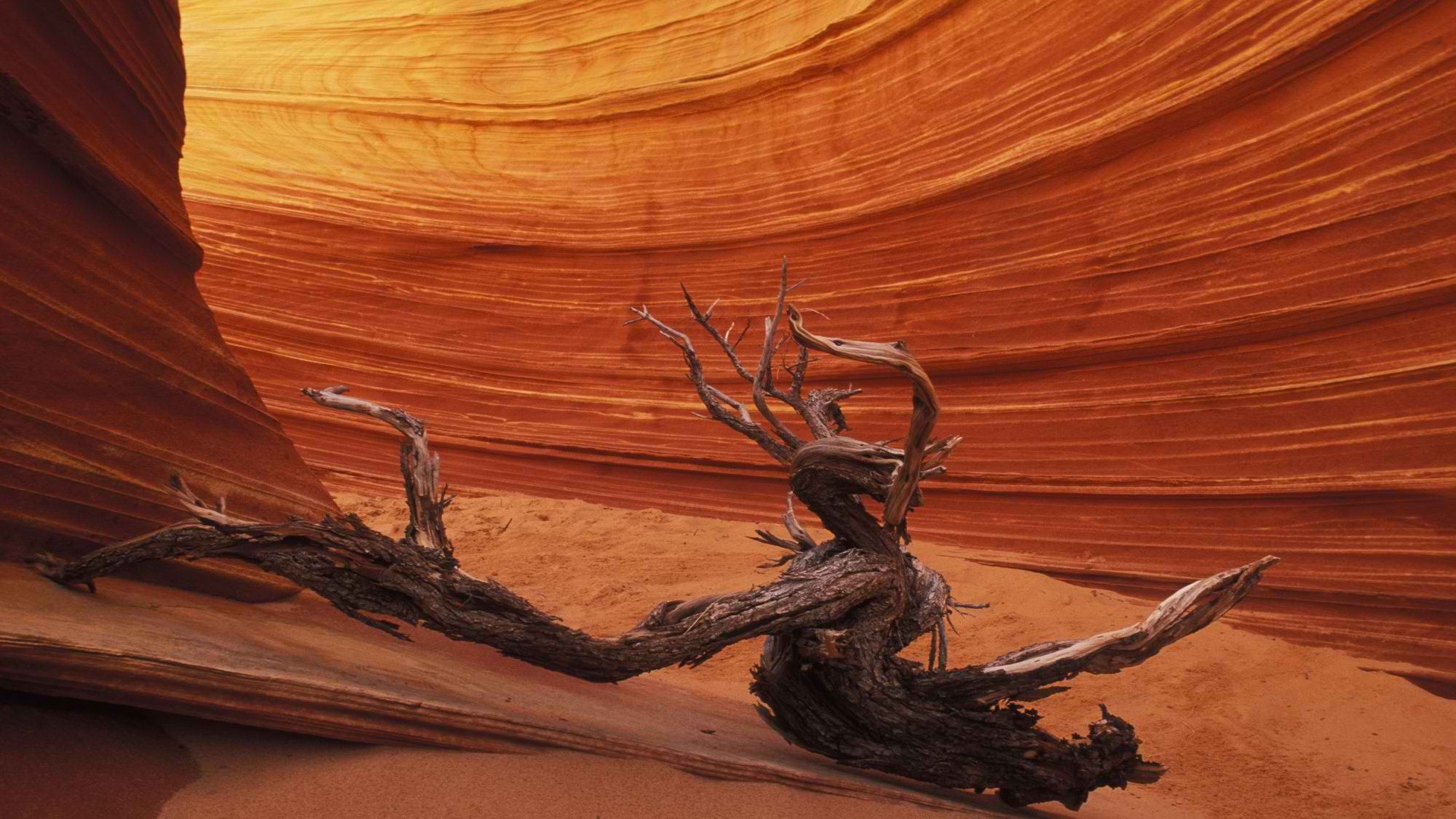 The road to Antelope Canyon is gated by the Navajo Nation and entry is restricted to guided tours led by authorized tour guides. Tours can be purchased in nearby Page, and range from $30 to $80 per person, depending on the time of the day and length of the tour. 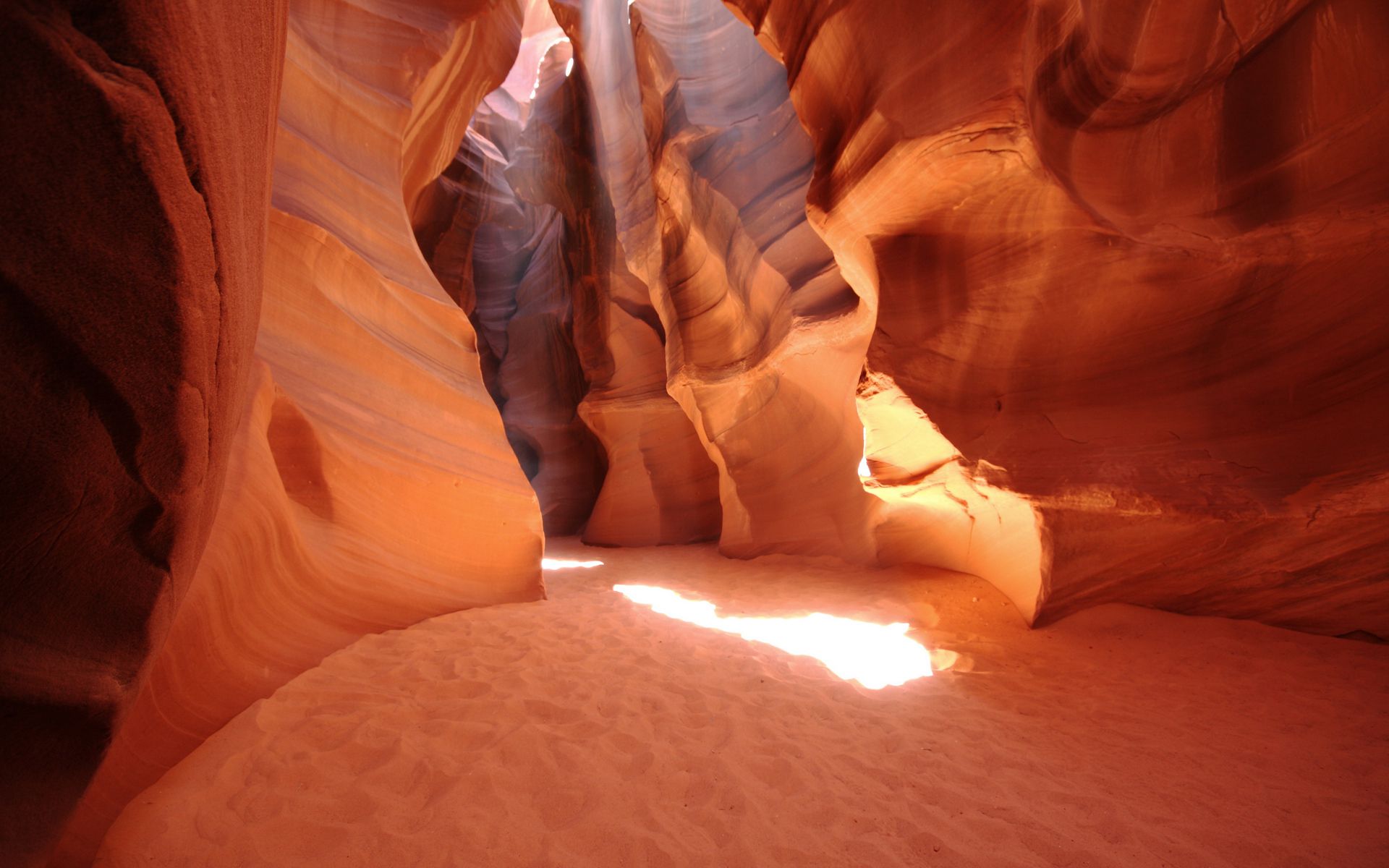