Preikestolen or Prekestolen (English: Preacher’s Pulpit or Pulpit Rock) is a famous tourist attraction in the municipality of Forsand in Rogaland county, Norway. Preikestolen is a steep cliff which rises 604 metres (1,982 ft) above the Lysefjorden. Atop the cliff, there is an almost flat top of approximately 25 by 25 metres (82 ft × 82 ft). It sits on the north side of the fjord, opposite the Kjerag plateau, located on the south side.

Tourism at the site has been increasing in recent years, with between 150,000 and 200,000 visitors in 2012, making it one of the most visited natural tourist attractions in Norway. BASE jumpers often leap from the cliff. Due to its increased popularity, there is currently a project under way to improve the path to the site, which is only accessible via a 3.8-kilometre (2.4 mi) long hike. 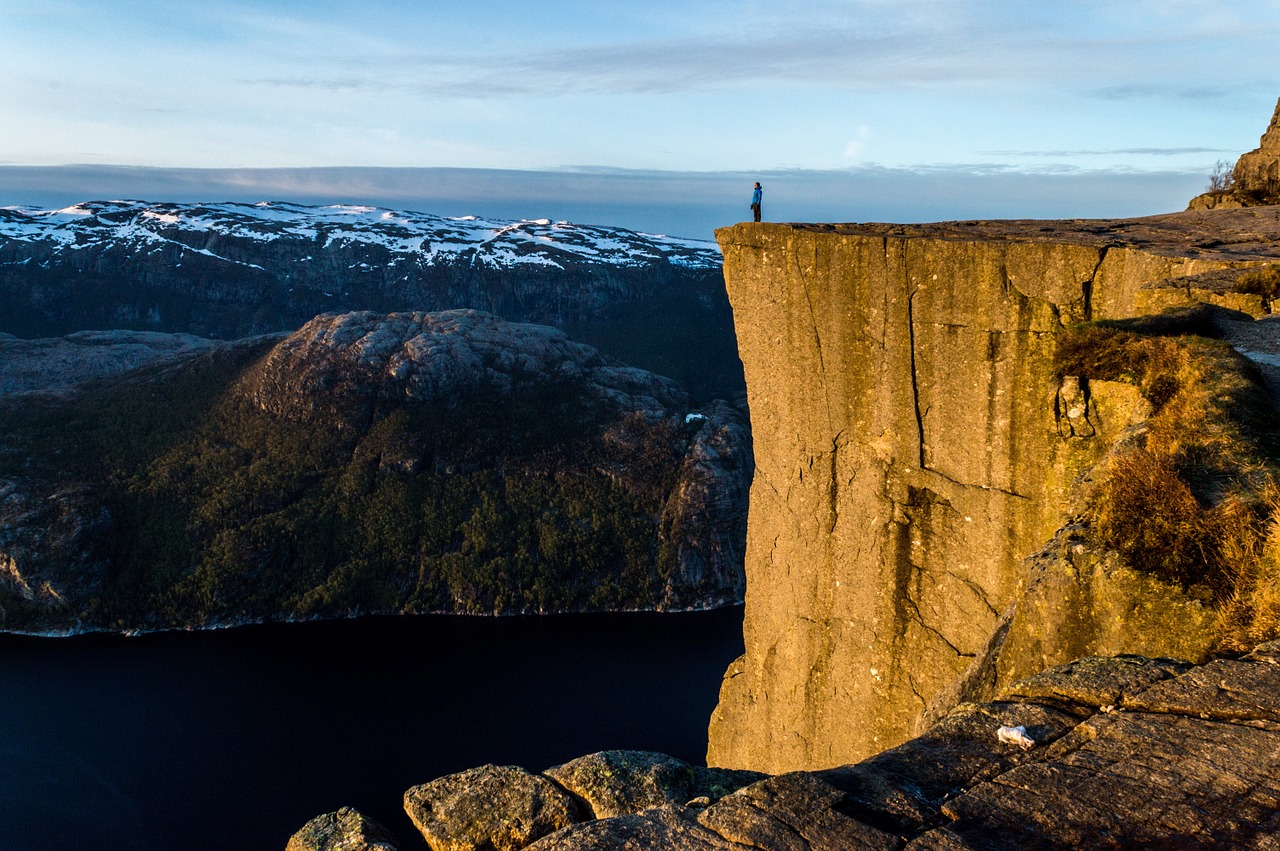 The old local name of the site is Hyvlatonnå (English: Planed Tooth). The name Prekestolen (without the i) was coined around the year 1900 when the local tourist organisation, Stavanger Turistforening (no) wanted to promote the site for trekking. The “i” was added later to concord with Nynorsk, the official local form of Norwegian, and the site is now known both locally and officially as “Preikestolen.”

Preikestolen is located in the southern part of the Ryfylke district in Rogaland county in Western Norway. The city of Stavanger, the fourth largest in Norway, with a number of direct flights between European cities, is located 25 kilometres (16 mi) from the site, and the parking facility for Preikestolen is located about one hour from Stavanger by ferry and car.

Access to Preikestolen from Stavanger is via the Norwegian National Road 13 (Rv13) and the ferry from Tau. From the south, access is by the Rv13 through Sandnes via the ferry from Lauvvika to Oanes. The road is usually open and the ferries running year-round. However, due to snow, it is not always possible to do the hike to the top in the winter.

The walk to Preikestolen is very steep in places. The path starts at the Preikestolhytta, at an elevation of approximately 270 metres (890 ft) above sea level, and climbs to 604 metres (1,982 ft). The hike takes 1–3 hours depending on experience and fitness level. Even though the elevation differential is only 334 metres (1,096 ft) and the walk is not particularly long, about 3.8 kilometres (2.4 mi) each way, the total elevation gain and loss over the course of the hike is more than one might initially expect, as the path climbs and descends various ridges.

The walk is not recommended in winter and spring when there is snow and ice, and the track may be slippery. The best season to hike the trail is from April to October. Sturdy shoes and rain gear are recommended for the hike.

A convenient alternative is available from mid June to mid August, a tourist ferry from Lauvvik (nl) to Lysebotn that passes beneath the Pulpit Rock. Booking well in advance is recommended, as this is a very popular route. A more expensive alternative is to sail through the Lysefjorden, with trips running year-round. Outside of summer, the weather may be wet and cold, and clouds may obstruct views of the cliff. The ship stops at several small docks on the way in and out, including a layover at the end of the Lysefjorden at the village of Lysebotn. 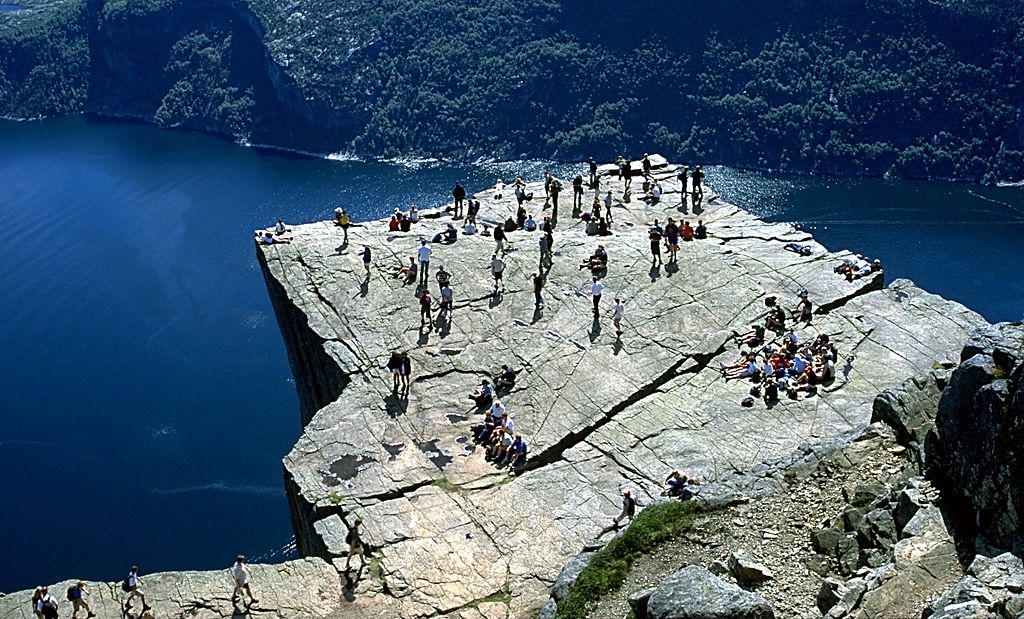 The cliff was formed during the ice age, approximately 10,000 years ago, when the edges of the glacier reached the cliff. The water from the glacier froze in the crevices of the mountain and eventually broke off large, angular blocks, which were later carried away with the glacier. This is the cause of the angular shape of the plateau. Along the plateau itself there continues to be a deep crack. Due to these cracks, the plateau will at some point fall down, but all the geological investigations have revealed that this will not happen in the foreseeable future, and geologists have confirmed the safety of the plateau. 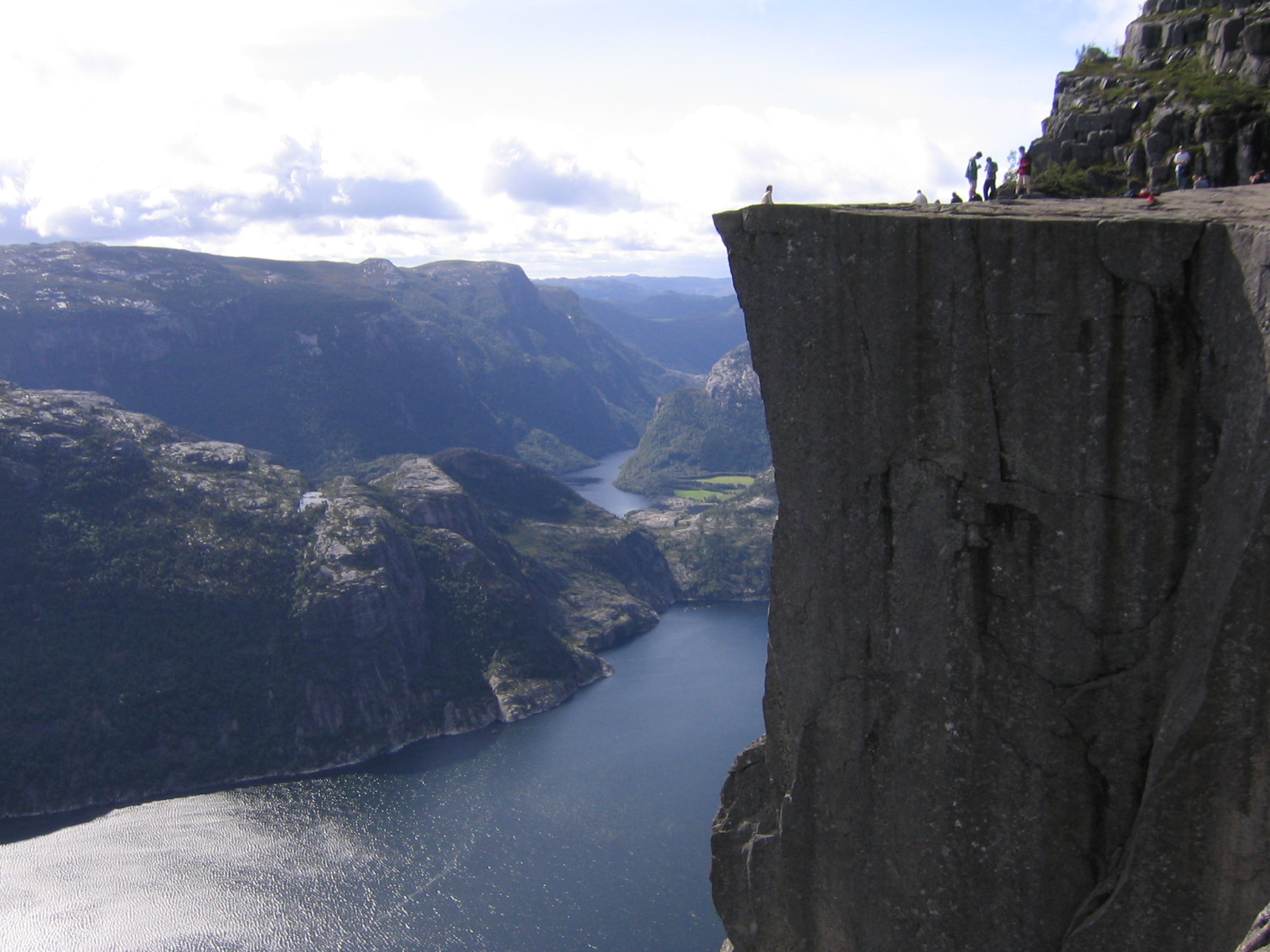