Janowska was a Nazi German labor, transit and concentration camp established September 1941 in occupied Poland on the outskirts of Lwów (Poland, today Lviv in Ukraine). The camp was labeled Janowska after the nearby street’s name ulica Janowska, nowadays Shevchenka street (Ukrainian: Вулиця Шевченка).

The city of Lwów, Poland (now Lviv, Ukraine) was occupied by the Soviet Union in September 1939 (after the invasion of Poland at the beginning of World War II), under the terms of the Ribbentrop-Molotov Pact. At that time, there were over 330,000 Jews residing in Lwów, including over 90,000 Jewish children and infants. Over 150,000 of these Jews were refugees from the German-occupied part of Poland. In June 1941, however, the German Army occupied Lwów as part of the Operation Barbarossa invasion. Almost no Jews were alive at the end of the war, many being horrifically tormented and tortured before they were murdered.

During the Lwów/Lemberg massacre of June 1941, the retreating Soviets killed about 7,000 Polish and Ukrainian prisoners who were being held in three prisons (Brygidki, Zamarstynów, Łąckiego) in Lwów. The Germans blamed the massacre on the Jews and used the NKVD’s atrocity as propaganda to incite a first pogrom in which over 4,000 Jews were killed. A further 7,000 Jews were murdered by the German Einsatzgruppen.

The onset of the Nazi regime let loose a wave of antisemitic feeling. Encouraged by the German army, local Ukrainian nationalists murdered about 5,500 Jews during the second Lviv pogrom in early July 1941. On July 25–27, 1941, a second pogrom took place, known as the “Petliura Days”, named for Symon Petliura. For three straight days, Ukrainian militants went on a murderous rampage through the Jewish districts of Lwów. Groups of Jews were herded out to the Jewish cemetery and to the prison on Łąckiego street where they were shot. More than 2,000 Jews were killed and thousands more were injured.

In early November 1941, the Nazis closed off northern portions of the city of Lwów into a ghetto. German police shot and killed thousands of elderly and sick Jews as they crossed under the rail bridge on Pełtewna Street (which was called bridge of death by Jews), while they were on their way to the ghetto. In March 1942, the Nazis began to deport Jews from the ghetto to the Belzec extermination camp. By August 1942, more than 65,000 Jews had been deported from the Lwów ghetto and killed. In early June 1943, the Germans destroyed and liquidated the ghetto.

The Janowska Labour and Transit Camp 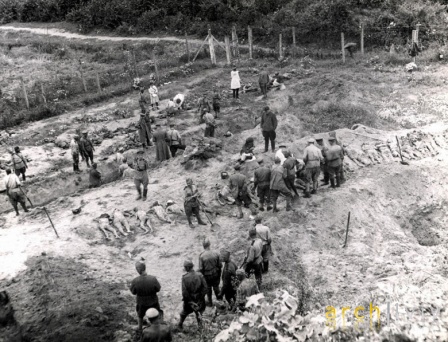 In addition to the Lwów ghetto, in September 1941, the Germans set up a D.A.W. (Deutsche Ausrüstungswerke – the German Armament Works) workshop in prewar Steinhaus’ mill machines factory on 134 Janowska Street, in northwestern suburbs of Lwów (that time in German-occupied southeastern Poland, now in western Ukraine). This factory became a part of a network of factories, owned and operated by the SS. The commandant of the camp was SS-Haupsturmführer Fritz Gebauer. Jews who worked at this factory were used as forced laborers, mainly working in carpentry and metalwork.

In October 1941, the Nazis established a concentration camp beside the factory, which housed the forced laborers along with the rest of prisoners. Thousands of Jews from the Lwów ghetto were forced to work as slave laborers in this camp. When the Lwów ghetto was liquidated by the Nazis, the ghetto’s inhabitants who were fit for work were sent to the Janowska camp; the rest were deported to the Belzec for extermination. The concentration camp was guarded by Sonderdienst battalion of the SS-trained Wachmänner known as “Trawniki men”.

In addition to being a forced-labor camp for Jews, Janowska was a transit camp (Durchgangslager Janowska) during the mass deportations of Polish Jews to the killing centers in 1942. Jews underwent a selection process in Janowska camp similar to that used at Auschwitz-Birkenau and Majdanek extermination camps. Those classified as fit to work remained at Janowska for forced labor. The majority, rejected as unfit for work, were deported to Belzec and killed, or else were shot at the Piaski ravine, located just north of the camp. In the summer and fall of 1942, thousands of Jews (mainly from the Lwów ghetto) were deported to Janowska and killed in the Piaski ravine.

Liquidation of The Janowska Camp

The evacuation of the Janowska camp began in November 1943. As the Germans attempted to destroy the traces of mass murder (Sonderaktion 1005), they forced the prisoners to open the mass graves in Lesienicki forest and burn the bodies. On November 19, 1943, the inmates staged an uprising against the Nazis and attempted a mass escape. A few succeeded in escaping, but most were recaptured and killed. The SS staff and their local auxiliaries murdered at least 6,000 Jews who had survived the uprising killings, as well as Jews in other forced labor camps in Galicia, at the time of the Janowska camp’s liquidation.

The Soviet Extraordinary State Commission had determined that over 200,000 people were killed in Janowska in the course of the camp operation. The ashes mixed with crushed bones were buried to a depth of six feet in various places. A more precise total has not been determined. The Commission might have over-estimated the number of murdered there, along the line of its highly politicized war-crime reports such as the Burdenko’s 1944 Katyn massacre communiqué, which was an outright falsification. Janowska serves as prison to this day. 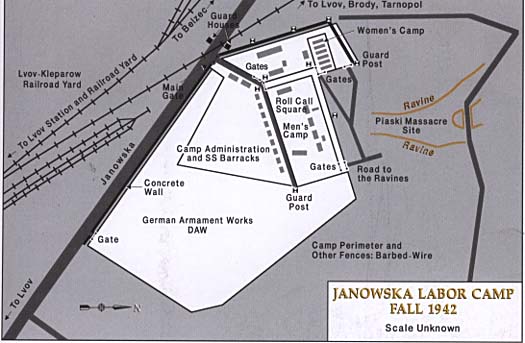