Kowloon Walled City was a densely populated, largely ungoverned settlement in New Kowloon, Hong Kong. Originally a Chinese military fort, the Walled City became an enclave after the New Territories were leased to Britain in 1898. Its population increased dramatically following the Japanese occupation of Hong Kong during World War II. In 1987, the Walled City contained 33,000 residents within its 2.6-hectare (0.010 sq mi) borders. From the 1950s to the 1970s, it was controlled by Triads and had high rates of prostitution, gambling, and drug use.

In January 1987, the Hong Kong government announced plans to demolish the Walled City. After an arduous eviction process, demolition began in March 1993 and was completed in April 1994. Kowloon Walled City Park opened in December 1995 and occupies the area of the former Walled City. Some historical artifacts from the Walled City, including its yamen building and remnants of its South Gate, have been preserved there.

After Japan’s surrender, China announced its intent to reclaim its rights to the Walled City. Refugees poured in to take advantage of Chinese protection, and 2000 squatters occupied the Walled City by 1947. After a failed attempt to drive them out in 1948, the British adopted a ‘hands-off’ policy in most matters concerning the Walled City.
In January 1950, a fire broke out that destroyed over 2500 huts, home to nearly 3500 families and 17,500 total people. The disaster brought about the need for proper fire prevention in the largely wooden-built squatter areas, complicated by the lack of political ties with the colonial and Chinese governments. The ruins left new arrivals to the Walled City opportunity to build anew, questioning if the fire may have been intentionally set for this reason.

Beginning in the 1950s, Triad groups such as the 14K and Sun Yee On gained a stranglehold on the Walled City’s countless brothels, gambling parlors, and opium dens. The Walled City had become such a haven for criminals that police would venture into it only in large groups. It was not until 1973–74, when a series of more than 3,500 police raids resulted in over 2,500 arrests and over 1,800 kilograms (4,000 lb) of seized drugs, that the Triads’ power began to wane. With public support, particularly from younger residents, the continued raids gradually eroded drug use and violent crime. In 1983, the police commander of Kowloon City District declared the Walled City’s crime rate to be under control.

The City also underwent massive construction during the 1960s and 1970s. Eight municipal pipes provided water to the entire structure (although more could have come from wells). A few of the streets were illuminated by fluorescent lights, as sunlight rarely reached the lower levels. Although the rampant crime of earlier decades diminished in later years, the Walled City was still known for its high number of unlicensed doctors and dentists, who could operate there without threat of prosecution.

Although the Walled City was for many years a hotbed of criminal activity, most residents were not involved in any crime and lived peacefully within its walls. Numerous small factories and businesses thrived inside the Walled City, and some residents formed groups to organise and improve daily life there. An attempt by the government in 1963 to demolish some shacks in a corner of the City gave rise to an “antidemolition committee” that served as the basis for a Kaifong association. Charities, religious societies, and other welfare groups were gradually introduced to the City. While medical clinics and schools went unregulated, the Hong Kong government did provide some services, such as water supply and mail delivery.

Over time, both the British and the Chinese governments found the City to be increasingly intolerable, despite the lowering reported crime rate. The quality of life in the City — sanitary conditions in particular — was far behind the rest of Hong Kong. The Sino-British Joint Declaration in 1984 laid the groundwork for the City’s demolition. The mutual decision to tear down the Walled City was announced on 14 January 1987.

The government distributed some HK$2.7 billion (US$350 million) in compensation to the estimated 33,000 residents and businesses in a plan devised by a special committee of the Hong Kong Housing Authority. Some residents were not satisfied with the compensation, and were forcibly evicted between November 1991 and July 1992. After four months of planning, demolition of the Walled City began on 23 March 1993 and concluded in April 1994. Construction work on Kowloon Walled City Park started the following month. The park now serves as a memorial of the old Walled City complete with museums and tour. 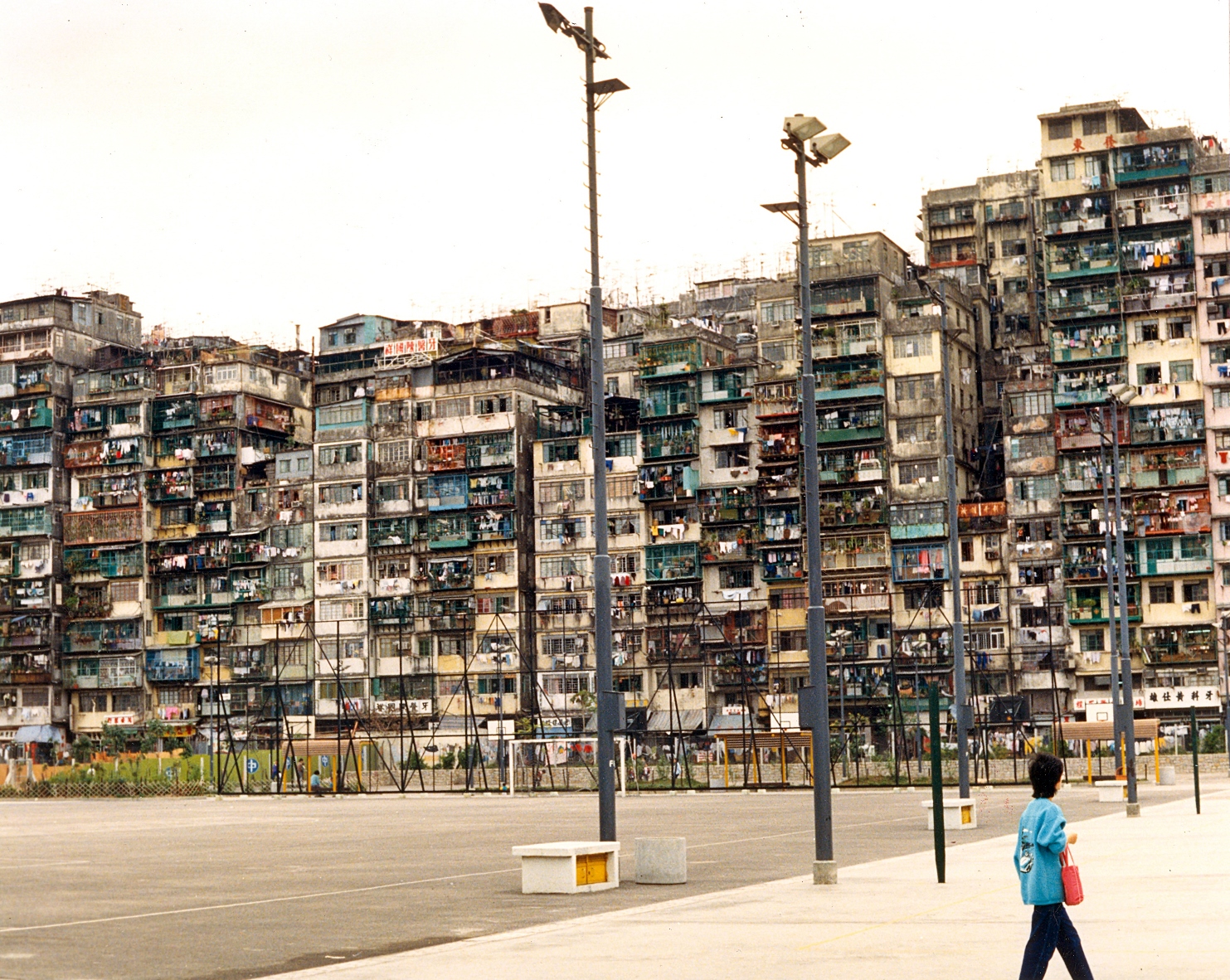 The Walled City was located in what became known as the Kowloon City area of Kowloon. In spite of its transformation from a fort into an urban enclave, the Walled City retained the same basic layout. The original fort was built on a slope and consisted of a 2.6-hectare (0.010 sq mi) plot measuring about 210 by 120 metres (690 by 390 ft). The stone wall surrounding it had four entrances and measured 4 metres (13 ft) tall and 4.6 metres (15 ft) thick before it was dismantled in 1943.

Construction surged dramatically during the 1960s and 1970s, until the formerly low-rise City consisted almost entirely of buildings with 10 storeys or more (with the notable exception of the yamen in its centre). However, due to the Kai Tak Airport’s position 0.8 kilometres (0.50 mi) south of the City, buildings did not exceed 14 storeys. The two-storey Sai Tau Tsuen settlement bordered the Walled City to the south and west until it was cleared in 1985 and replaced with Carpenter Road Park.

The City’s dozens of alleyways were often only 1–2 m (3.3–6.6 ft) wide, and had poor lighting and drainage. An informal network of staircases and passageways also formed on upper levels, which was so extensive that one could travel north to south through the entire City without ever touching solid ground. Construction in the City went unregulated, and most of the roughly 350 buildings were built with poor foundations and few or no utilities. Because apartments were so small — about 60% were 23 m2 (250 sq ft) — space was maximised with wider upper floors, caged balconies, and rooftop additions. Roofs in the City were full of television antennae, clothes lines, water tanks, and rubbish, and could be crossed using a series of ladders.

Kowloon Walled City’s early population fluctuated between zero and a few hundred, and began growing steadily shortly after World War II. However, there is no accurate population information available for much of the Walled City’s later existence. Official census numbers estimated the Walled City’s population at 10,004 in 1971 and 14,617 in 1981, but these figures were commonly considered to be much too low. Informal estimates, on the other hand, often mistakenly included the neighbouring squatter village of Sai Tau Tsuen.

A thorough government survey in 1987 gave a clearer picture: an estimated 33,000 people resided within the Walled City. Based on this survey, the Walled City had a population density of approximately 1,255,000 inhabitants per square kilometre (3,250,000 /sq mi) in 1987.

Contrary to what many outsiders believed, most residents of the Walled City behaved similarly to other Hong Kong natives. In response to difficult living conditions, the residents formed a tightly knit community, helping one another endure various hardships. Within families, wives often did housekeeping, while grandmothers cared for their grandchildren and other children from surrounding households. The City’s rooftops were an important gathering place, especially for residents who lived on upper floors. Parents used them to relax, and children would play or do homework there after school.

The yamen in the heart of the City was also a major social centre, a place for residents to talk, have tea or watch television, and to take classes such as calligraphy. The Old People’s Centre also held religious meetings for Christians and others. Other religious institutions included the Fuk Tak and Tin Hau temples, which were used for a combination of Buddhist, Taoist, and animist practices. 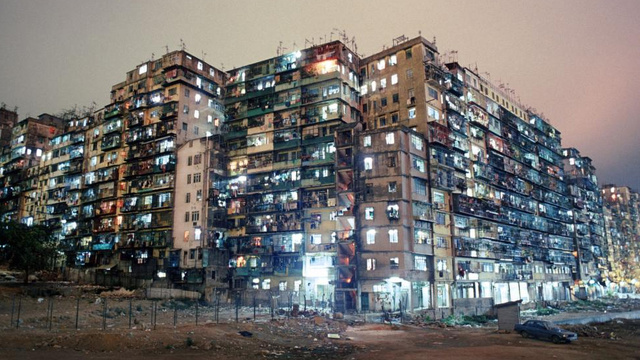 The area where the Walled City once stood is now Kowloon Walled City Park (九龍寨城公園), located in today’s Kowloon City District. The 31,000 m2 (330,000 sq ft) park was completed in August 1995, and opened officially by Governor Chris Patten a few months later on 22 December. Construction of the park cost a total of HK$76 million. It is adjacent to Carpenter Road Park.

The park’s design is modelled on Jiangnan gardens of the early Qing Dynasty. It is divided into eight landscape features, with the fully restored yamen as its centrepiece. The park’s paths and pavilions are named after streets and buildings in the Walled City. Artefacts from the Walled City, such as five inscribed stones and three old wells, are also on display in the park.

On a green lawn surrounded by a brick wall lie broken engraved stones and stone foundations.

Components of the park include: 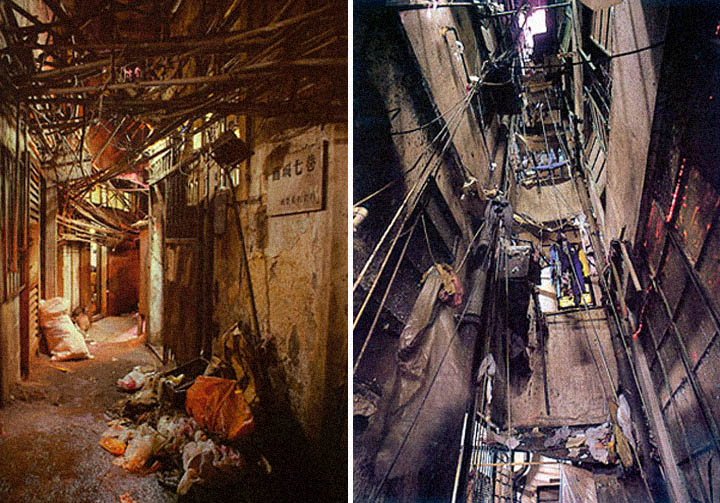 The Antiquities and Monuments Office conducted archaeological examinations as the Walled City was being demolished, and several cultural remains were discovered. Among them were the Walled City’s yamen and remnants of its South Gate, which were officially designated declared monuments of Hong Kong on 4 October 1996.

The South Gate had originally served as the Walled City’s main entrance. Along with its foundation, other remains included two stone plaques inscribed with “South Gate” and “Kowloon Walled City” from the South Gate and a flagstone path that had led up to it. The foundations of the City’s wall and East Gate were also discovered. The Hong Kong government preserved the South Gate remnants next to a square in front of the yamen.

The yamen building is made up of three halls. Originally the middle hall served the Assistant Magistrate of Kowloon’s administrative office, and the rear block was his residence. After the government officials left the area in 1899, it was used for several other purposes, including an old people’s home, a refuge for widows and orphans, a school, and a clinic. It was restored in 1996 and is now found near the centre of the park. It contains a photo gallery of the Walled City, and two cannons dating back to 1802 sit at the sides of its entrance.

A few people who spent time in Kowloon Walled City have written accounts of their experiences. Evangelist Jackie Pullinger wrote a 1989 memoir, Crack in the Wall, about her involvement in treating drug addicts within the Walled City. In his 2004 autobiography Gweilo, Martin Booth describes his exploration of the Walled City as a child in the 1950s. In addition to such accounts, many authors, game designers, and filmmakers have used the Walled City to convey a sense of oppressive urbanisation or unfettered criminality.

In literature, Robert Ludlum’s novel The Bourne Supremacy uses the Walled City as one of its settings. The City appears as a virtual reality environment (described by Steven Poole as an “oasis of political and creative freedom”) in William Gibson’s Bridge trilogy, and as a contrast with Singapore in his Wired article “Disneyland with the Death Penalty”. In the manga Crying Freeman, the titular character’s wife travels to the Walled City to master her swordsmanship and control a cursed sword. The manga Blood+: Kowloon Nights uses the Walled City as the setting for a series of murders.

The Walled City of Kowloon has no visible wall around it, but it is as clearly defined as if there were one made of hard, high steel. It is instantly sensed by the congested open market that runs along the street in front of the row of dark run-down flats—shacks haphazardly perched on top of one another giving the impression that at any moment the entire blighted complex will collapse under its own weight, leaving nothing but rubble where elevated rubble had stood.

Hive of dream. Those mismatched, uncalculated windows. How they seemed to absorb all the frantic activity of Kai Tak airport, sucking in energy like a black hole.