Leptis Magna, also known as Lectis Magna (or Lepcis Magna as it is sometimes spelled), also called Lpqy, Neapolis, Lebida or Lebda to modern-day residents of Libya, was a prominent city of the Roman Empire. Its ruins are located in Khoms, Libya, 130 km (81 mi) east of Tripoli, on the coast where the Wadi Lebda meets the sea. The site is one of the most spectacular and unspoiled Roman ruins in the Mediterranean. 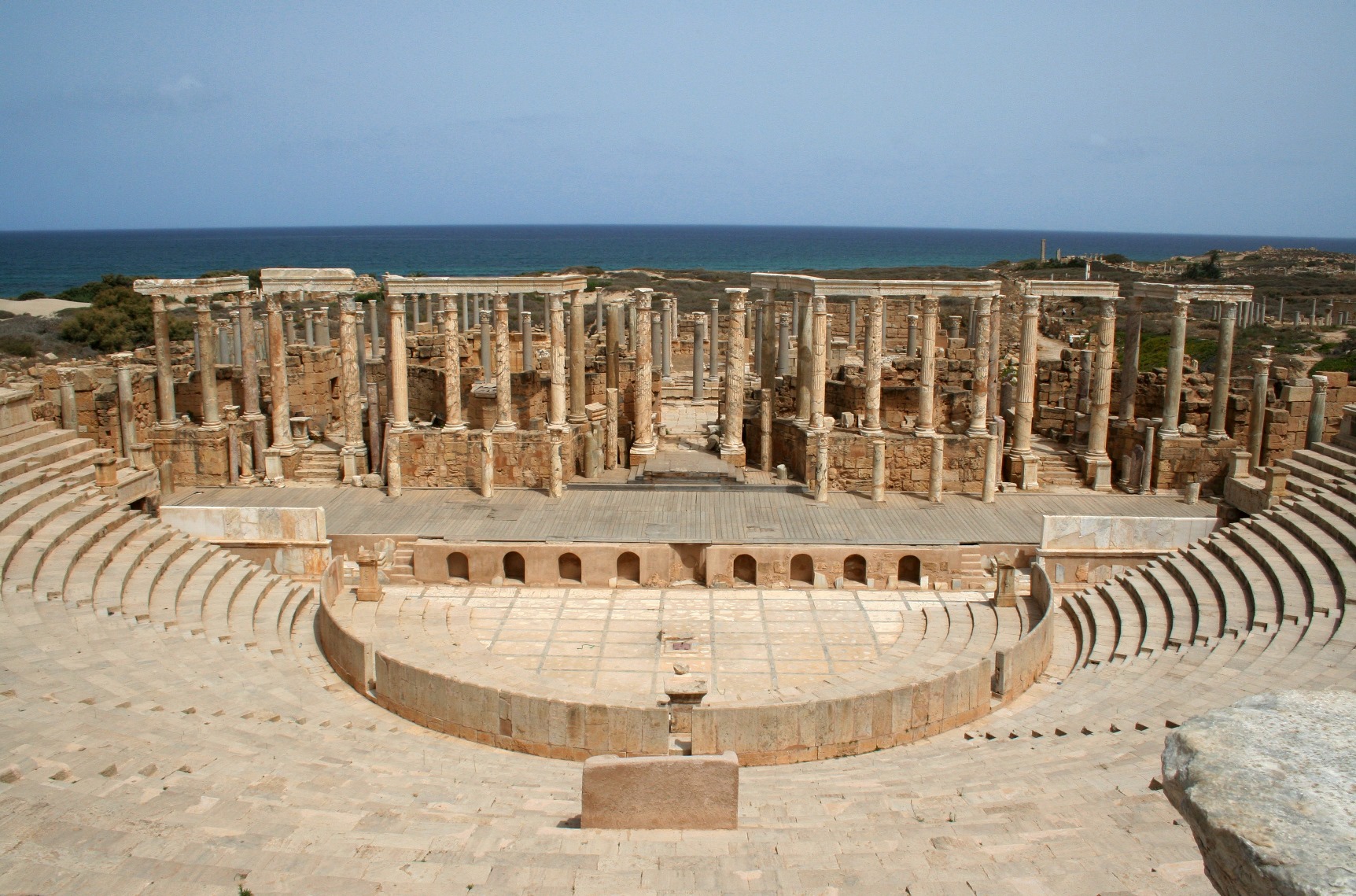 History as a City

The city appears to have been founded by a group of local Berbers (and probably Phoenicians) sometime around 1000 BC, who gave it the Lybico-Berber name Lpqy. The town did not achieve prominence until Carthage became a major power in the Mediterranean Sea in the 4th century BC. It nominally remained part of Carthage’s dominions until the end of the Third Punic War in 146 BC and then became part of the Roman Republic, although from about 111 BC onward, it was for all intents and purposes an independent city.

During the reign of Augustus, Leptis Magna was classified as a “Civitas libera et immunis”, or a free community, over which the governor had an absolute minimum of control. As such Leptis retain its two suphetes at the head of its government, with the mhzm, similar to the Roman aediles, as minor magistrates. In addition there were such sacred officials as the ‘addir ‘ararim or praefectus sacrorum, the nēquim ēlīm, and probably a sacred college of fifteen members. These office were still in effective operation when Leptis was made a “Municipium” with a certain degree of Roman rights and privileges at some time between 61 and 68 A.D., during the rule of Nero.

Soon Italian merchants settled in the city and started a profitable commerce with the Libyan interior. The republican Rome sent some colonists together with a small garrison in order to control the city. Since then the city started to grow and was even allowed to create its own money (coins). Leptis Magna remained as such until the reign of the Roman emperor Tiberius, when the city and the surrounding area were formally incorporated into the empire as part of the province of Africa. It soon became one of the leading cities of Roman Africa and a major trading post. 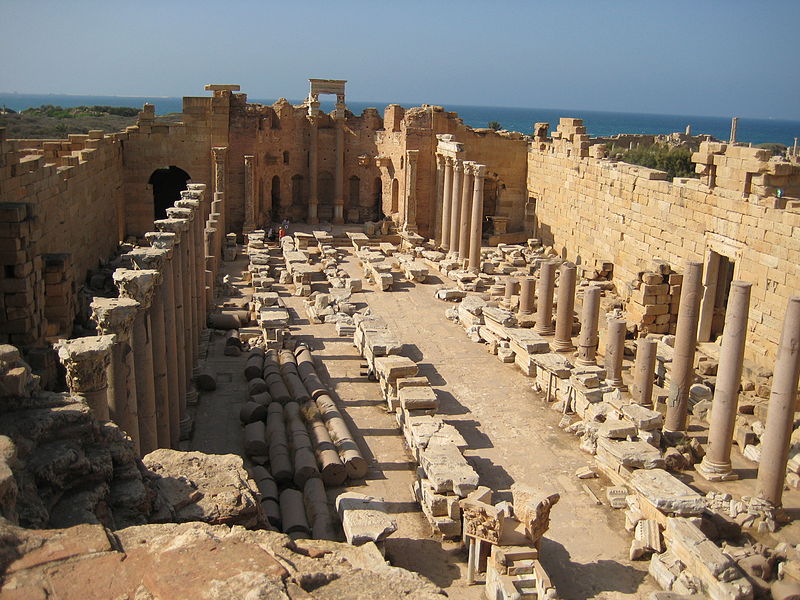 Leptis achieved its greatest prominence beginning in 193 AD, when a Berber native son, Lucius Septimius Severus, became emperor. He favored his hometown above all other provincial cities, and the buildings and wealth he lavished on it made Leptis Magna the third-most important city in Africa, rivaling Carthage and Alexandria. In 205 AD, he and the imperial family visited the city and received great honors. Among the changes that Severus introduced were to create a magnificent new forum and to rebuild the docks. The natural harbour had a tendency to silt up, but the Severan changes made this worse, and the eastern wharves are extremely well preserved, since they were hardly used. Leptis over-extended itself at this period. During the Crisis of the Third Century, when trade declined precipitously, Leptis Magna’s importance also fell into a decline, and by the middle of the fourth century, large parts of the city had been abandoned. Ammianus Marcellinus recounts that the crisis was worsened by a corrupt Roman governor named Romanus during a major tribal raid who demanded bribes to protect the city. The ruined city could not pay these and complained to the emperor Valentinian. Romanus then bribed people at court and arranged for the Leptan envoys to be punished “for bringing false accusations”. It enjoyed a minor renaissance beginning in the reign of the emperor Theodosius I.

In 439 AD, Leptis Magna and the rest of the cities of Tripolitania fell under the control of the Vandals when their king, Gaiseric, captured Carthage from the Romans and made it his capital. Unfortunately for the future of Leptis Magna, Gaiseric ordered the city’s walls demolished so as to dissuade its people from rebelling against Vandal rule. The people of Leptis and the Vandals both paid a heavy price for this in 523 AD when a group of Berber raiders sacked the city. Belisarius recaptured Leptis Magna in the name of Rome ten years later, and in 534 AD, he destroyed the kingdom of the Vandals. Leptis became a provincial capital of the Eastern Roman Empire (see Byzantine Empire) but never recovered from the destruction wreaked upon it by the Berbers. It was the site of a massacre of Berber chiefs of the Leuathae tribal confederation by the Roman authorities in 543 AD. Historian Theodore Mommsen wrote that under Byzantine rule the city was fully Christian. During the decade 565-578 AD Christian missionaries from Leptis Magna even began to move once more among the Amazigh tribes as far south as the Fezzan in the Libyan desert and converted the Garamantes. But the city’s decadence -linked even to Sahara’s desertification- continued even if were built new churches and by the time of the Arab conquest of Tripolitania in the 650s, the city was nearly abandoned except for a Byzantine garrison force. The progressive growth of arid land around Leptis damaged its importance and the port become full of sand. As a consequence, when Arabs arrived around 640 AD and later conquered Leptis, they found only a little garrison and a small city of less than 1,000 inhabitants. Under Arab domination Leptis disappeared: by the tenth century the city was forgotten and fully covered by sand. 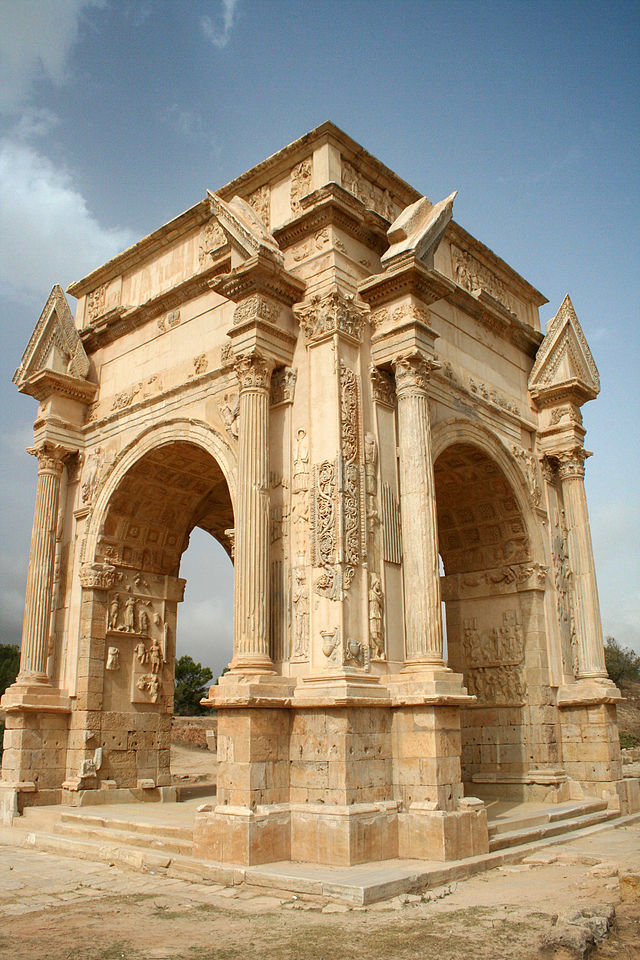 History as a site

Today, the site of Leptis Magna is the site of some of the most impressive ruins of the Roman period. Part of an ancient temple was brought from Leptis Magna to the British Museum in 1816 and installed at the Fort Belvedere royal residence in England in 1826. It now lies in part of Windsor Great Park. The ruins are located between the south shore of Virginia Water and Blacknest Road close to the junction with the A30 London Road and Wentworth Drive. When Italians conquered Italian Libya in the early XX century, they dedicated huge efforts to the rediscovery of Leptis Magna. In the early 1930s Italian archeological research was able to show again the buried remains of nearly all the city.

In June 2005, it was revealed that archaeologists from the University of Hamburg had been working along the coast of Libya when they uncovered a 30 ft length of five colourful mosaics created during the 1st or 2nd century. The mosaics show with exceptional clarity depictions of a warrior in combat with a deer, four young men wrestling a wild bull to the ground, and a gladiator resting in a state of fatigue and staring at his slain opponent. The mosaics decorated the walls of a cold plunge pool in a bath house within a Roman villa at Wadi Lebda in Leptis Magna. The gladiator mosaic is noted by scholars as one of the finest examples of representational mosaic art ever seen—a “masterpiece comparable in quality with the Alexander Mosaic in Pompeii.” The mosaics were originally discovered in the year 2000 but were kept secret in order to avoid looting. They are currently on display in the Leptis Magna Museum.

There were reports that Leptis Magna was used as a cover for tanks and military vehicles by pro-Gaddafi forces during the 2011 Libyan civil war. When asked about the possibility of conducting an air-strike on the historic site, NATO refused to rule out the possibility of such an action saying that it had not been able to confirm the rebels’ report that weapons were being hidden at the location.