Metro-2 in Moscow, Russia, is the informal name for a purported secret underground metro system which parallels the public Moscow Metro. The system was supposedly built, or at least started, during the time of Joseph Stalin and was codenamed D-6 by the KGB. It is supposedly still operated by the Main Directorate of Special Programmes (ru) and Ministry of Defence.

The length of Metro-2 is rumored to exceed that of the public Metro. It is said to have four lines, and to lie 50 to 200m deep. It is said to connect the Kremlin with the Federal Security Service (FSB) headquarters, the government airport at Vnukovo-2, and an underground town at Ramenki, in addition to other locations of national importance.

In 1994, the leader of an urban exploration group, the Diggers of the Underground Planet, claimed to have found an entrance to this underground system. The Metro-2 rumors have been dismissed by one source as “a parody excursion by public transport into the murky world of ‘intelligence'”. This source describes virtually all available information as “speculative, unsupported by documentation such as photographs. There are narratives told by people who said they helped build Metro-2, and urban spelunkers claim to have ‘seen’ Metro-2, but there are no explicit ‘firsthand’ accounts.”

Origin Of The Term

In the summer of 1992, the literary and journalistic magazine Yunost (‘Юность’) published a novel by the author and screenwriter Vladimir Gonik entitled Preispodniaia (‘Преисподняя’) (English: Abyss), set in an underground bunker in Moscow. Earlier, in the spring of that year, excerpts from the novel had been published in the weekly newspaper Sovershenno sekretno (ru). In an interview with both the newspaper’s editor and Gonik in 1993, the author stated that the term “Metro-2” had been introduced to them, and that the novel had been written based on information collected over the previous 20 years by the two of them on things such as secret bunkers and the underground railways connecting them. Gonik admitted that he had worked on the book between 1973 and 1986, and that some of the more sensitive information had been purposefully misrepresented.

In later years, Gonik has argued that the bunkers, and therefore the so-called “Metro-2”, had been for use by the leadership of the Politburo and the Communist Party of the Soviet Union (CPSU), along with their families, in case of war. According to him, in the early 1970s the General Secretary of the CPSU, Leonid Brezhnev, personally visited the main bunker, and, in 1974, awarded the Chairman of the KGB at the time, Yuri Andropov, the Gold Star Medal of the Hero of Socialist Labour. Apparently, each member of the Central Committee had a 180m2 apartment, with a study, lounge, kitchen and bathroom. Gonik claims to have gathered this information working as a doctor in the polyclinic of the Ministry of Defence.

After the publication of the novel in 1992/1993, the subject of a second, secret, underground railway has been raised many times, especially in the Russian media. In particular, the magazine Ogoniok has referred to a “Metro-2” several times.

Russian journalists have reported that the existence of Metro-2 is neither confirmed nor denied by the FSB or the Moscow Metro administration. However, listed below is evidence for the Metro-2’s existence.

Report from the U.S. Department of Defense

In 1991, the United States Department of Defense published a report entitled Military forces in transition, which devoted several pages to a secret government underground in Moscow. It also included a diagram of the system superimposed on a map of the city.

The Soviets have constructed deep-underground both in urban Moscow and outside the city. These facilities are interconnected by a network of deep interconnected subway lines that provide a quick and secure means of evacuation for the leadership. The leadership can move from their peacetime offices through concealed entryways in protective quarters beneath the city. There are important deep-underground command posts in the Moscow area, one located at the Kremlin. Soviet press has noted the presence of an enormous underground leadership bunker adjacent to Moscow State University. These facilities are intended for the national command authority in wartime. They are estimated to be 200–300 meters deep, and can accommodate an estimated 10,000 people. A special subway line runs from some points in Moscow and possibly to the VIP terminal at Vnukovo Airfield

In 1992, in an interview with Time, Deputy Director Broadcaster Igor Malashenko (ru) spoke about the existence of Sofrino-2, about 30 km to the north-east of Moscow’s television broadcasting centers, built at great depths in case of nuclear war. According to Malashenko, the equipment was unusable due to age. He went on to say that the same fate befell many of the underground bomb shelters, and in particular a system of underground bunkers beneath the building of Moscow State University, which he said were flooded and had deteriorated.

Reports on the number of underground communications are greatly exaggerated. In the days of Stalin, who was very afraid of assassination attempts, there was in fact a single-track underground railway line running from the Kremlin to his so-called “Nearby Dacha” in Volynskoye. Today, neither the Dacha nor the subway line are in use. In addition, there were underground transport links between the General Staff and several other government facilities. In 1991 a pneumatic mail tube was constructed between the CPSU Central Committee building in Moscow’s Old Square and the Kremlin.

In 2008, Shevchenko once again touched upon the Metro-2.

Currently, the Kremlin subway cannot be called a transportation artery, and, as far as I know, for its continued operation it required major repairs: for among other things there are a lot of underground utilities which will eventually decay.

In 2008, Mikhail Poltoranin (ru), a minister under Boris Yeltsin in the early 1990s, explained

This is an extensive network of tunnels and an emergency command center in case of war, where you can command the nuclear forces of the country. It can hide a lot of people – its maintenance was necessary. I know that the “Metro-2” has branches that go to the suburbs so that the command could move away from the epicenter of a nuclear attack.

When ex-chief of the Moscow Metro Dmitry Gayev was questioned on the existence of the Metro-2, he responded

I would be surprised if it did not exist

In the same year, in an interview with Izvestia, he said

There is a lot of talk about the existence of secret transport tunnels. I will not deny anything. I would be surprised if they did not exist. You ask: Can we use them to transport passengers? It is not for me to decide, but for those organizations who own the railways. I do not exclude such a possibility.

In 2008, in an interview in Argumenty i Fakty, the head of the Moscow Metro independent trade union, Svetlana Razin admitted

Several years ago, among the drivers of the depot Izmailovo there was recruiting for a service on secret routes, and although there were many willing, they were to select only one. Entering the midst of these tunnels is only people with special clearance. Most often, these branches used very short trains, consisting of battery-electric locomotive and one passenger car.

Line of the Metro-2 has long been in the KGB office, and subsequently came under the wing of the FSB

Its underground transport communications connecting the Kremlin with the command posts, which are designed to ensure the stable operation of the senior military and political leadership in times of armed conflict, including a nuclear conflict. This is a gigantic system. It was built for 40 years. It cost a huge amount of money. For 91 years, the very existence of this system was the highest state secret.

Oleg Gordievsky, a former colonel of the KGB who worked for the British Secret Intelligence Service (MI6) for 11 years and defected in 1985, in an interview with Argumenty i Fakty called The supreme secret of the KGB, which has not been disclosed until now stated

You still do not know the main KGB secret yet: a huge underground city, a whole communications network of such facilities. But they will not show you; they will never, of course. 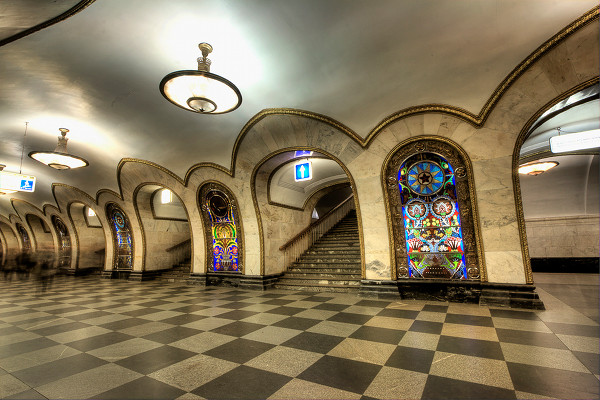 Museum of the Cold War

In 2006, the Museum of the Cold War (ru) was opened to the public, located in the old Tagansky Protected Command Point at a depth of 60m. Initially it was a defence bunker (GO-42 or RFQ “Tagan”), yet its depth is significantly higher than that purported of the Metro-2 lines, and so it could not have been part of the Metro-2 system.

In south-west Moscow, near the Ramenki District, there is a vacant lot to the south-west of the main building of Moscow State University. A complex of buildings of the research base of Association “Science” (NEBO “Nauka”) built to a depth of 180–200m is the largest underground bunker in Moscow. According to the same source, it is connected with other secret underground facilities, and appears to be able to house up to 15,000 people. A complex of surface buildings was built by architect Eugene Rozanov in 1975 by orders of Glavspetsstroy.

One of the first times the facility was mentioned was in Time in 1992. Its article refers to a journalist named “KGB officer”, who claims he took part in the construction of a large underground facility in Ramenki, whereby construction began in mid-1960s and was complete by mid-1970. The facility was named by the journalist as the “Underground City”, which was supposedly intended to give refuge to 15,000 people for 30 years in the event of a nuclear attack on Moscow.

In the media, the “Underground City” is often referred to as “Ramenki-43”, due to that being the address of one of the supposed entrances to the facility. Ostensibly, the address is home to Militarized Rescue Squad 21 and the 1st Paramilitary Rescue Squad.

Built for government emergency evacuation. The airport is an only army airport