Under the foundation of Phoebe Hearst Memorial Hall at Oglethorpe University in Georgia, the United States, is a large room, that was sealed shut with a welded stainless steel door more than seventy five years ago. A plaque on this door strictly forbids anyone from attempting to open the door for another six thousand years. Behind this steel door is an assortment of artifacts and documents comprising nearly all of humanity’s knowledge, as it was in 1940. This room is the Crypt of Civilization, and it represents the first successful attempt to record and preserve a snapshot of human culture and civilization for future inhabitants of planet Earth. It was the world’s first time capsule. The idea for the time capsule was conceived by Dr. Thornwell Jacobs in 1936, who was at that time the president of Oglethorpe University. While researching and teaching about ancient cultures, Jacobs was struck by the lack of information on past civilizations. This led him to the idea of creating a record of what life on earth was like, to lessen the struggles of future historians who might want to study our present civilization. 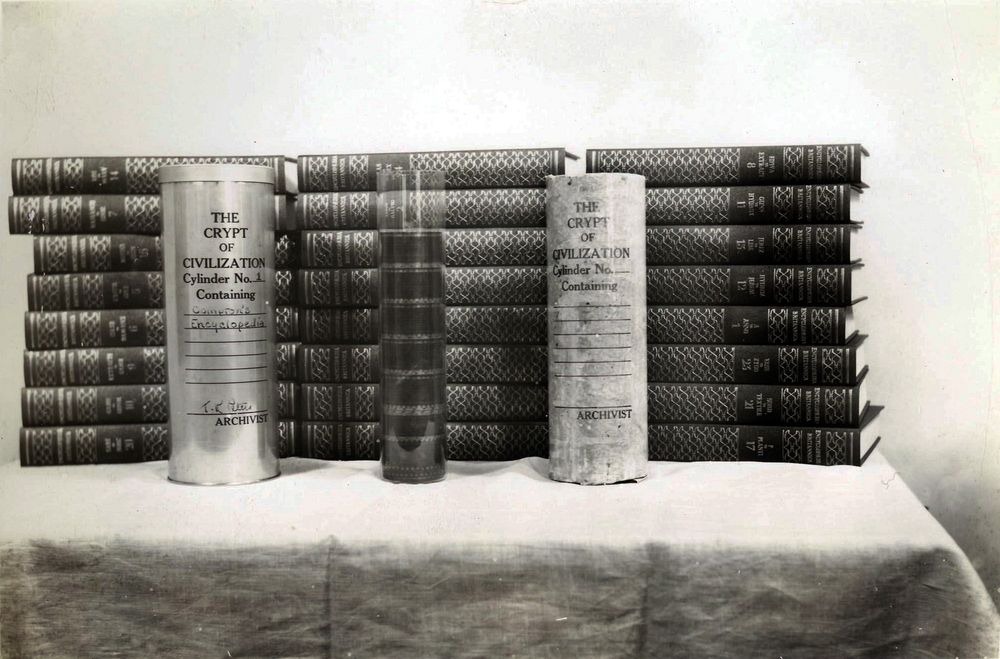 To assist him in this tremendous task, Dr. Jacobs sought the help of Thomas K. Peters, a pioneer American motion picture producer, photographer, and inventor. Peters was assigned the job of the project archivist and general manager of development and construction. Work on the crypt commenced in August, 1937, and over the next three years, Peter’s crew collected an astounding number of items including Budweiser beer, dentures, male and female mannequins, aluminum foil, board games, plastic toys, dishes, Vaseline, pantyhose, electric razors, sewing machine, calculator, seeds and what not. You can find the complete inventory here. Additionally, more than six hundred thousand pages of written material compiling the vast knowledge we’ve acquired over the last 6,000 years was collected on microfilm. The crypt also contains voice recordings of historical figures such as Adolf Hitler, Joseph Stalin, Benito Mussolini, and Franklin Roosevelt. Unusual sound clips were also included, such as the cartoon character Popeye the Sailor and a champion hog caller. Dr. Jacobs refrained from including gold, silver, or jewels to make the crypt unattractive to vandals. The site chosen for the preservation of the crypt was in the basement of Phoebe Hearst Hall at Oglethorpe University, which had previously held a swimming pool. The room measured twenty feet long, ten feet wide, and ten feet high and was built into the solid granite bedrock, seven feet underground. The walls were lined with porcelain enamel plates embedded in waterproof pitch. All items were placed inside steel receptacles with glass linings, filled with inert gas of nitrogen to prevent oxidation and aging.

The date of opening of the crypt was fixed at year 8113. This date was arrived by considering 1936 to be the halfway point since the establishment of the Egyptian calendar, which is believed to be 4241 B.C., and then adding the same number of years that had passed between then and 1936, which is 6,177 years. The crypt was sealed shut on May 25, 1940, and a plaque with a message was affixed to it pleading future generations not to open the crypt until 8113. The message reads:

This Crypt contains memorials of the civilization which existed in the United States and the world at large during the first half of the twentieth century. In receptacles of stainless steel, in which the air has been replaced by inert gases, are encyclopedias, histories, scientific works, special editions of newspapers, travelogues, travel talks, cinema reels, models, phonograph records, and similar materials from which an idea of the state and nature of the civilization which existed from 1900 to 1950 can be ascertained. No jewels or precious metals are included.

We depend upon the laws of the county of DeKalb, the State of Georgia, and the government of the United States and their heirs, assigns, and successors, and upon the sense of sportsmanship of posterity for the continued preservation of this vault until the year 8113, at which time we direct that it shall be opened by authorities representing the above governmental agencies and the administration of Oglethorpe University. Until that time we beg of all persons that this door and the contents of the crypt within may remain inviolate. 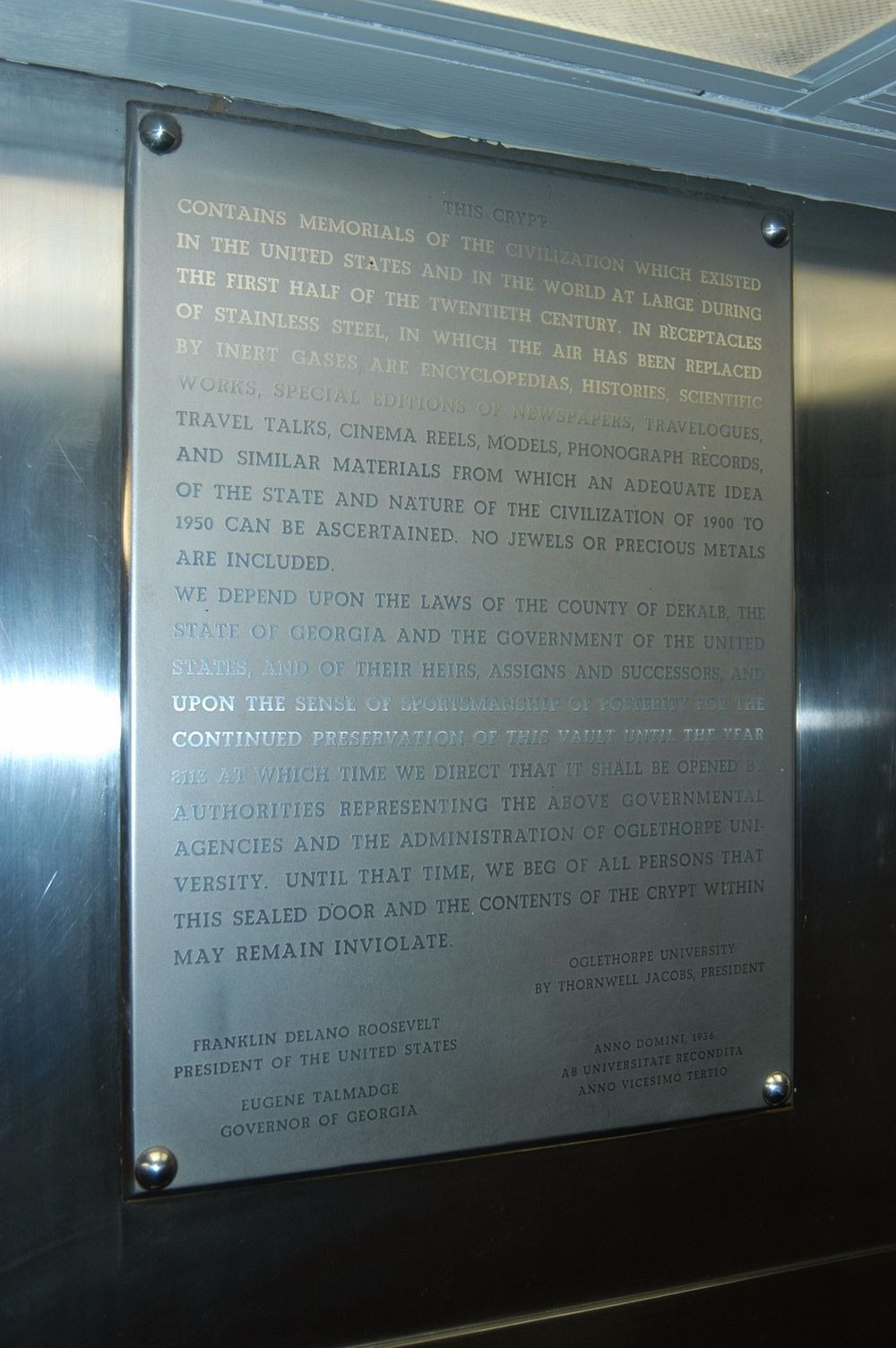 The possibility that future generations could have forgotten to speak English was also considered. So a machine called a “Language Integrator” was placed in front of the sealed chamber to teach the openers how to speak English. Jacob’s idea of the time capsule generated tremendous interest at that time, inspiring many identical projects elsewhere. Most notable among them are the Westinghouse Time Capsules prepared by the Westinghouse Electric &amp; Manufacturing Company for the 1939 New York World’s Fair. The container they built was shaped like a rocket and was referred to as a “capsule”, giving birth to the name “time capsule” that’s used today to describe these kinds of vessels. Westinghouse built another capsule in 1964. Both are buried 50 feet below Flushing Meadows–Corona Park, in New York City. They are scheduled to be opened at the same time in the year 6939. 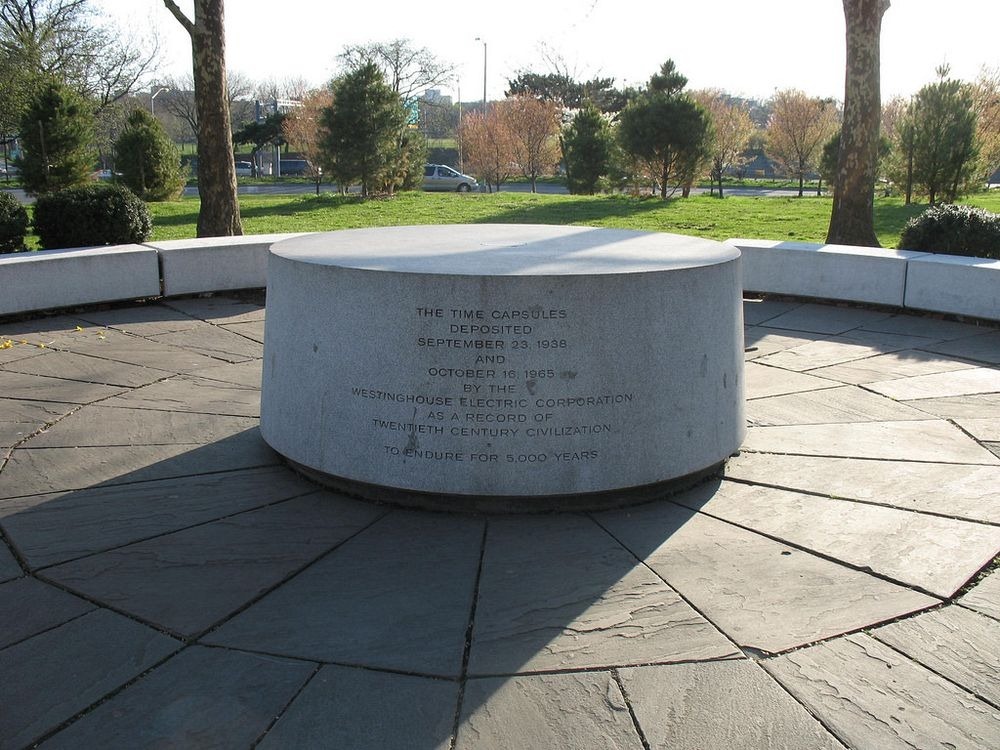 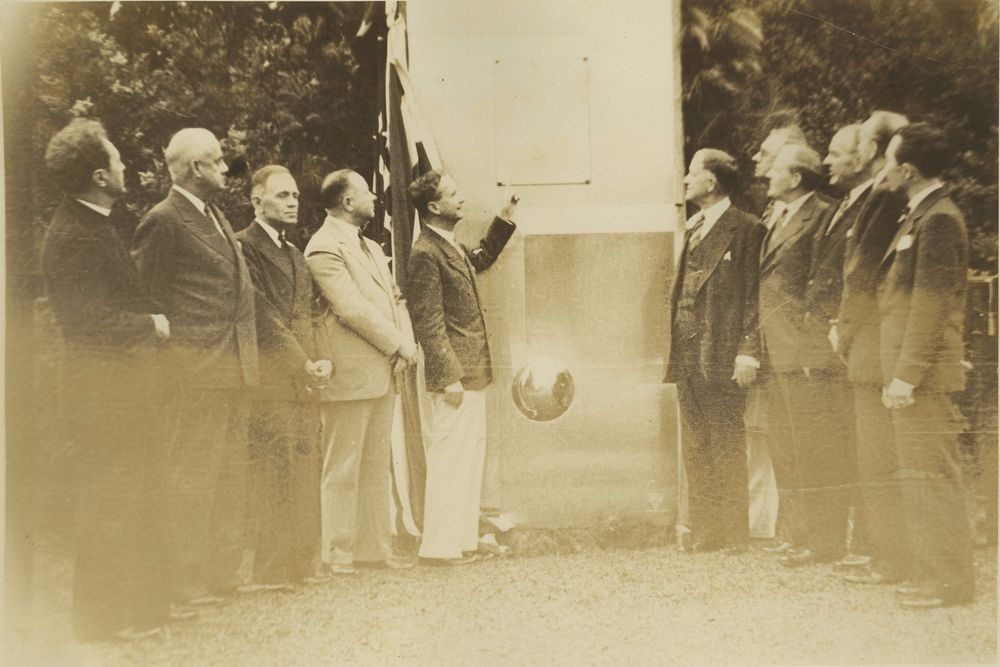 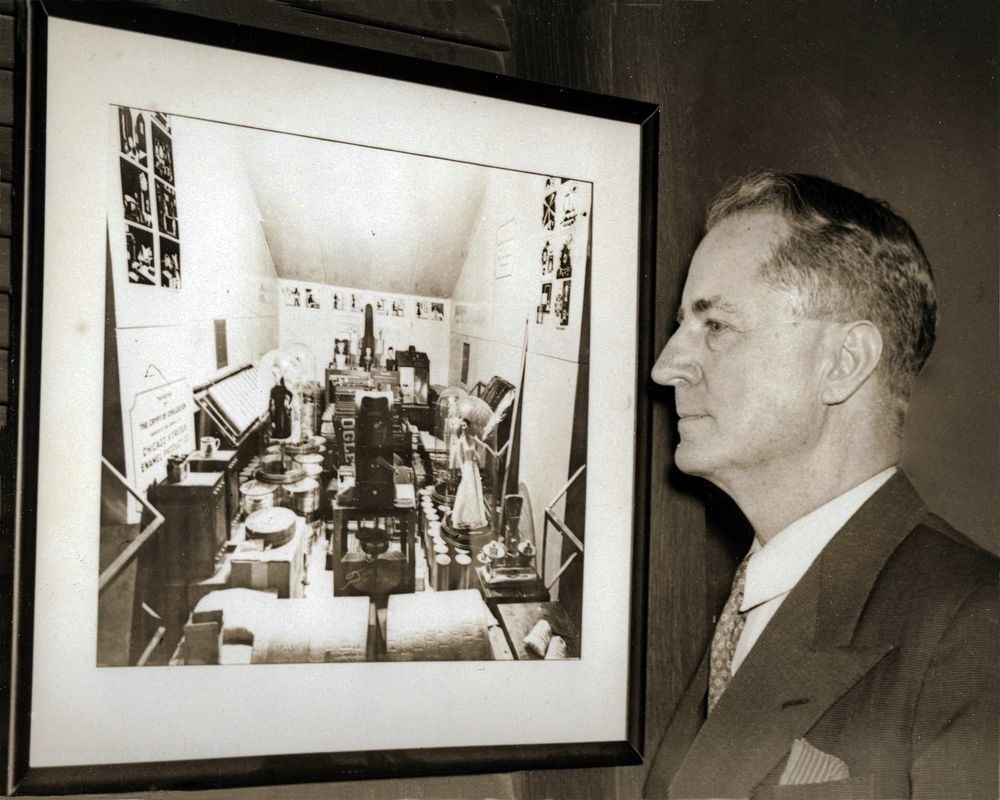 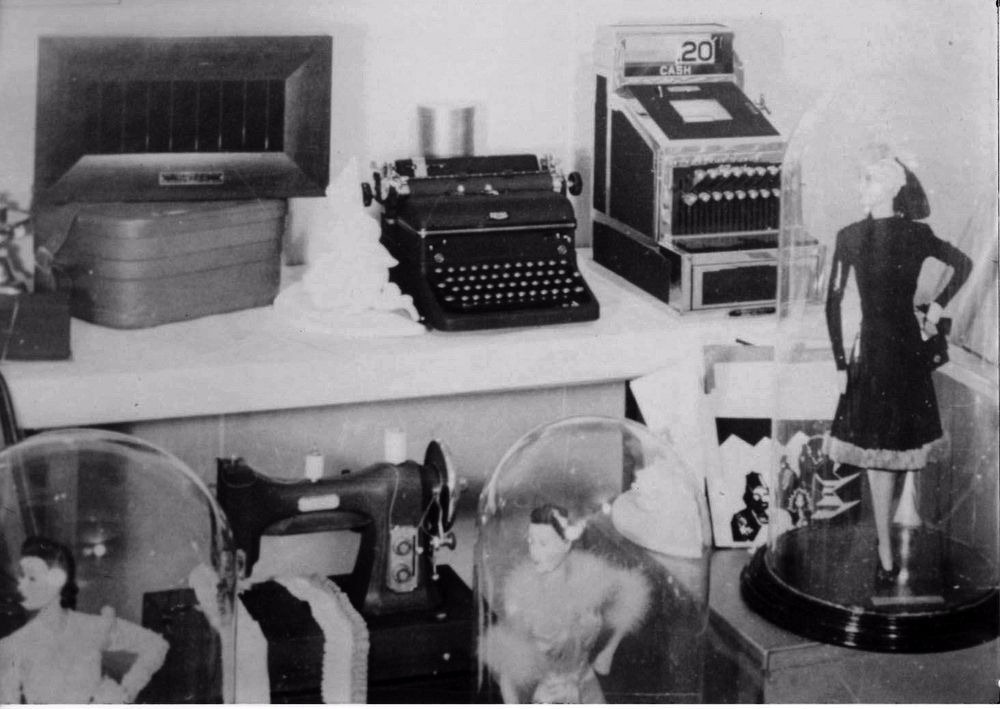 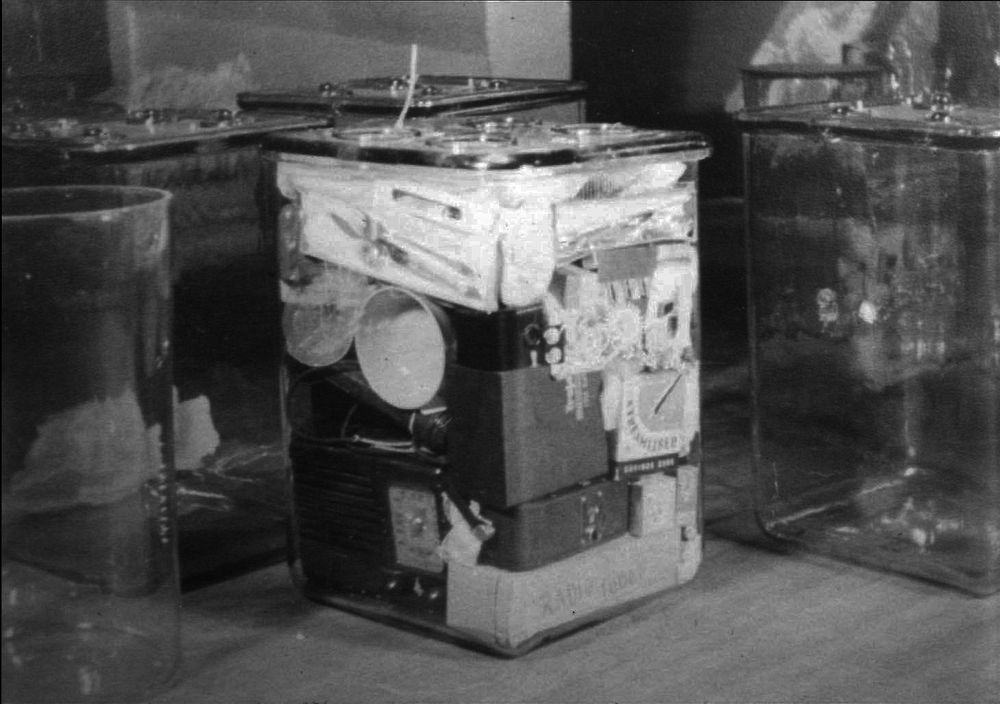