The Maunsell Forts were small fortified towers built in the Thames and Mersey estuaries during the Second World War to help defend the United Kingdom. They were operated as army and navy forts, and named after their designer, Guy Maunsell. The forts were decommissioned in the late 1950s and later used for other activities. One of the forts is managed by the unrecognised Principality of Sealand; boats visit the remaining forts occasionally, and a consortium called Project Redsands is planning to conserve the fort situated at Redsand.

The Maunsell naval (sea) forts, built in the Thames estuary and operated by the Royal Navy, were to deter and report German air raids following the Thames as a landmark, and attempts to lay mines by aircraft in this important shipping channel. 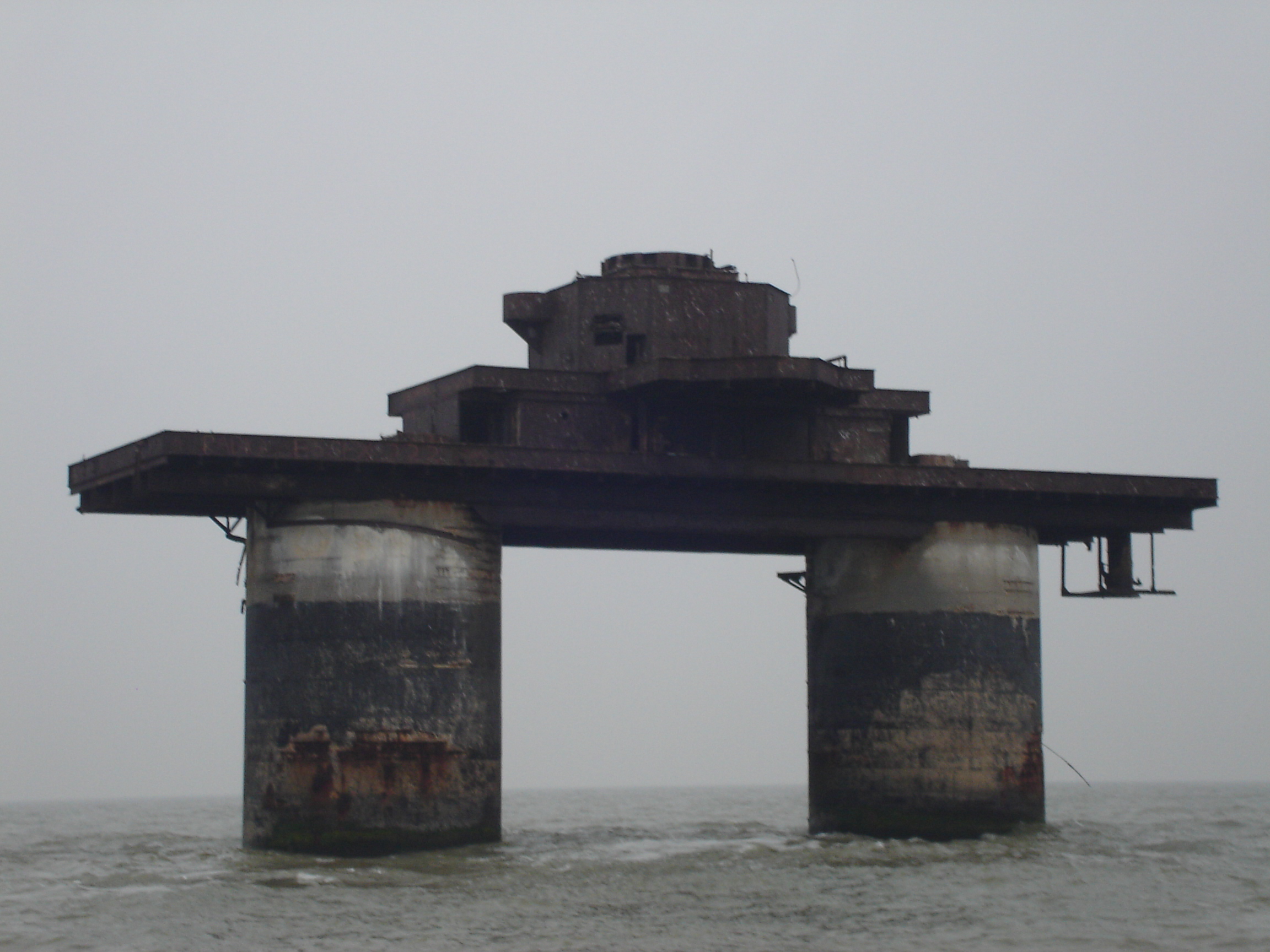 The locations of the seven Maunsell Forts off the east coast of England. There were four naval forts:

The design of these concrete structures is equal to a military grade bunker, due to the ends of the stilts, (under water) that are solidly locked into the ground. Many species of fish live near the fort(s) because the forts do create cover, and have provided landmark references for shipping.

The design was a concrete construction; a pontoon barge on which stood two cylindrical towers on top of which was the gun platform mounting two 3.75-inch guns and two 40 mm Bofors guns. They were laid down in dry dock and assembled as complete units. They were then fitted out — the crews going on board at the same time for familiarization — before being towed out and sunk onto their sand bank positions in 1942.

The naval fort design was the latest of several that Maunsell had devised in response to Admiralty inquiries. Early ideas had considered forts in the English Channel able to take on enemy vessels. 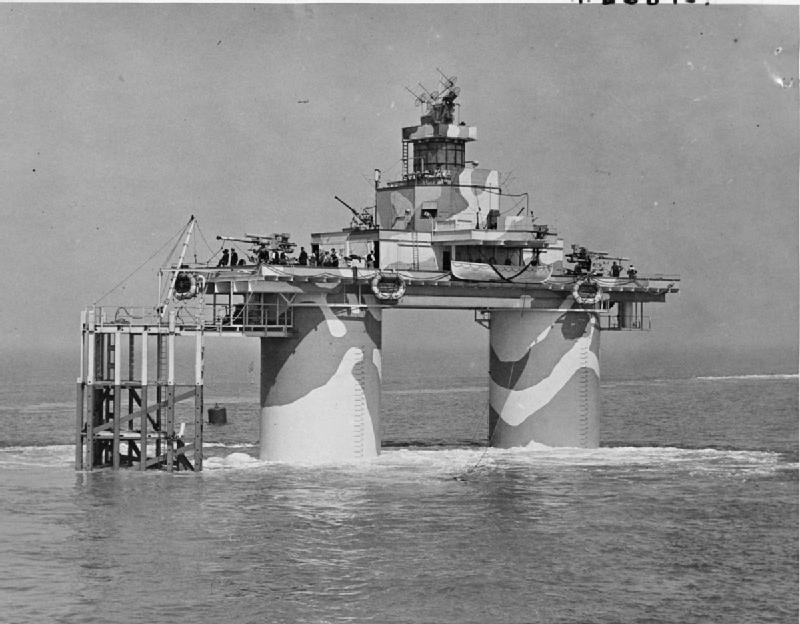 Maunsell also designed forts for anti-aircraft defence. These were larger installations comprising seven interconnected steel platforms, five carried guns arranged in a semicircle around the control center and accommodation while the seventh, set further out than the gun towers, was the searchlight tower.

Three forts were placed in the Mersey and three in the Thames estuary:

Each of these AA forts carried four QF 3.75 inch guns and two Bofors 40 mm guns. During World War 2, the forts shot down 22 aircraft and about 30 flying bombs. They were decommissioned by the Ministry of Defence in the late 1950s. 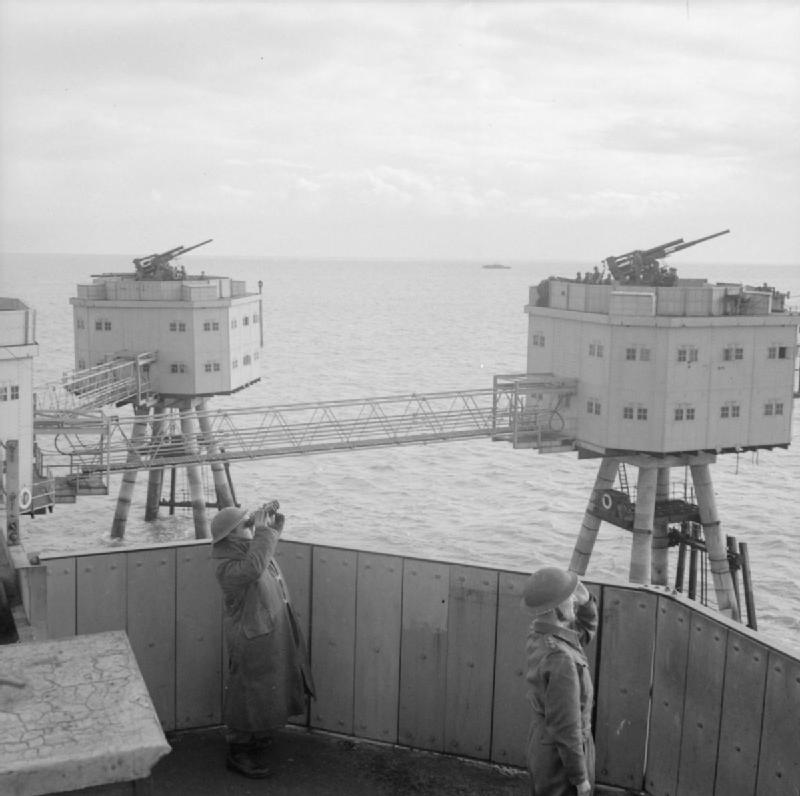 There are 7 forts in the Red Sands group, at the mouth of the Thames Estuary. These forts were previously connected by metal grate walk-ways. Now in a poor condition due to being located in mid-sea, it is however a wonder that they are still standing, and considered “liveable” by most authorities. In one of the forts appears an unusual danger warning sign, the purpose of which is unknown, but possibly advising persons to be cautious going across the bridge to Fort 3. The forts were in use during WW2, and all the bedding, housewares, etc. are in the same condition they were left in.

This group was built near the Thames estuary for anti-aircraft defence, and made-up of several towers north of Herne Bay and 9.2 miles from the nearest land.

Nore Army Fort was badly damaged in 1953 when the Norwegian ship Baalbek collided with it, destroying two of the towers, killing four civilians and destroying guns, radar equipment and supplies. The ruins were considered a hazard to shipping and dismantled in 1959–60. Parts of the bases were towed ashore by the Cliffe fort at Alpha wharf near the village of Cliffe, Kent, where as of 2006 they remain visible.

One of the Shivering Sands towers was lost in 1963 after a ship collided with it. In 1964 the Port of London Authority placed wind and tide monitoring equipment on the Shivering Sands searchlight tower, which was isolated from the rest of the fort by the demolished tower. This relayed data to the mainland via a radio link.

Sunk Head was destroyed by the Royal Engineers in the late 1960s. Tongue Fort collapsed in a storm in 1996.

In August and September 2005, artist Stephen Turner spent six weeks living alone in the searchlight tower of the Shivering Sands Fort in what he described as “an artistic exploration of isolation, investigating how one’s experience of time changes in isolation, and what creative contemplation means in a 21st-century context”.

Various forts were re-occupied for pirate radio in the mid-1960s.

In 1964, a few months after Radio Caroline went on air, Screaming Lord Sutch set up Radio Sutch in one of the towers at Shivering Sands. Sutch soon became bored with the project and sold the station to his manager Reginald Calvert who renamed the station Radio City and expanded operations into all of the five towers that remained connected. Calvert’s killing in a dispute over the station’s ownership (found to be self-defence rather than murder) contributed to the Government passing legislation against the pirates in 1967.

During the pirate era the Port of London Authority frequently complained that its monitoring radio link was being disrupted by the nearby Radio City transmitter.

Red Sands was likewise occupied by Radio Invicta, which was renamed KING Radio and then Radio 390, after its wavelength of approximately 390 metres. The 1965 Danger Man episode “Not-so-Jolly Roger” was partly filmed at Redsands and includes an acknowledgement to Radio 390 in its closing credits. Also filmed at the Red Sand forts was the 1968 Doctor Who serial Fury from the Deep, in which the complex stood in for a North Sea gas refinery besieged by an intelligent seaweed creature.

The size of the Army forts made them ideal antenna platforms, since a large antenna could be based on the central tower and guyed from the surrounding towers. 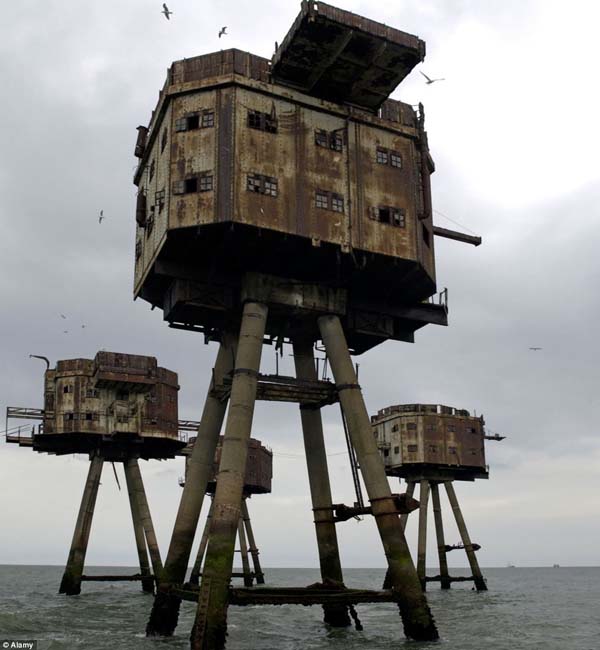 A small group of radio enthusiasts set up Radio Tower on Sunk Head Naval fort, but the station was run on a shoestring, had poor coverage and lasted only a few months. Claims by the company that they also intended to run a television service were never credible.

Paddy Roy Bates occupied the Rough Sands Fort and set up Radio Essex, later renamed BBMS — Britain’s Better Music Station — but was better known for his post-pirate activities. He, or a representative, lived in Roughs Tower since 1964, self-styling the tower as the Principality of Sealand.