Few sites tell such a graphically bittersweet story as the forgotten communist monuments that litter the landscape of Bulgaria. More than 150 of these concrete obelisks existed during the heyday of the Bulgarian Communist Party; some of them stood as metaphors of Soviet ideology, others celebrating ancient national heroes… but all crafted to deliver a poignant and striking glimpse of a brave future.

Now many of them lie in ruins – their intentions forgotten and their memory smothered by the churning cogs of a new capitalist society. However, out of all of these fading ghosts of communism, none leaves behind such a vivid impression as the House-Monument of the Bulgarian Communist Party on Mount Buzludzha. 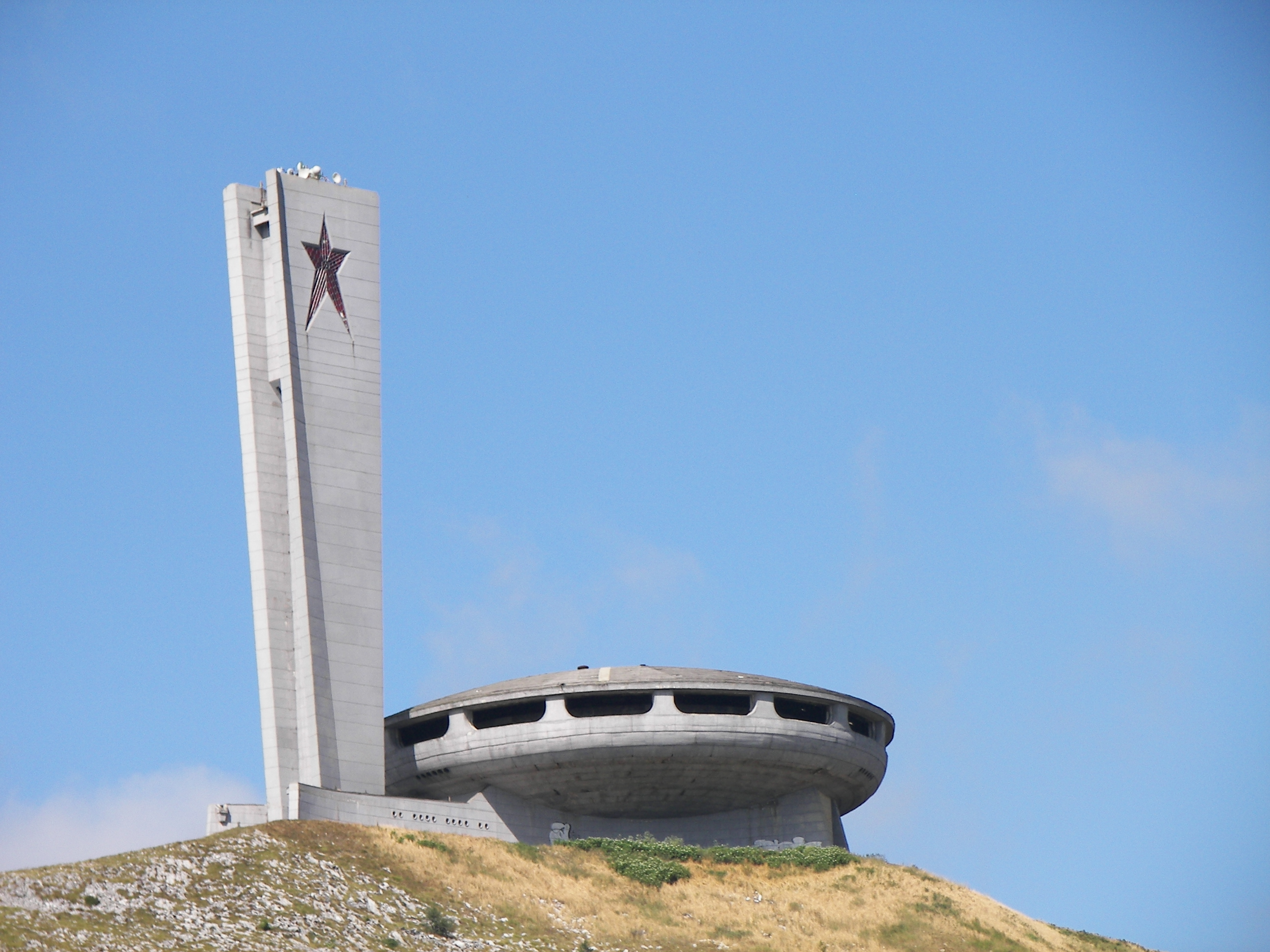 Situated high up in the Balkan Peninsula, at an altitude of 1441m, the Buzludzha monument was built in 1981 – when it served as the symbolic headquarters of Bulgarian communism. At first glance, it is hard to understand why anybody would choose this remote and inhospitable location for a site of such cultural significance; however, a brief review of Bulgarian history soon reveals the logic behind the decision.

In the fourteenth century Bulgaria was invaded by the Ottoman Empire, who remained here until the late nineteenth – when Russian forces swept across the country, liberating city after city from Turkish slavery. Bulgarian independence was finally declared in 1891. After a full five centuries of oppression, social ideologists, once silent, now began to share their ideas for the future of the state. While Bulgaria reverted to the Tsardom it had recognised before the Ottoman occupation, socialist revolutionaries began meeting in secret on Mount Buzludzha. It was here that notable figures such as Dimitar Blagoev lay the foundations of the Bulgarian Social-Democratic Workers’ Party… an idea which would outlive the Tsars, later forming the foundations of the Bulgarian Communist Party.

The peak of Mount Buzludzha is also significant in that it overlooks the notorious Shipka Pass. It was at this spot that one of the most savage battles of the Russo-Turkish War was waged; in 1877 a group of 2,500 Russian soldiers and around 5,000 Bulgarian volunteers stormed the Turkish garrison at Shipka, before successfully holding the pass against 38,000 Ottomans attacking from the south. Fighting at temperatures as low as minus thirty degrees Celsius, it is said that when the resistance ran out of ammo, they threw the frozen bodies of their comrades down on the heads of the approaching Turks.

Later, in 1944, as Hitler’s stranglehold on the country finally crumbled, it was to Russia that Bulgaria turned once more – quickly embracing the communist ideology of messieurs Engels, Marx and Lenin.

The House-Monument of the Bulgarian Communist Party was opened in 1981 –dedicated both to 90 years of independence from Turkish rule, as well as the liberation from Hitler’s fascist influence. Construction cost somewhere in the region of 16 million Bulgarian Levs – equating to almost 7 million British Pounds. Most of this money arrived as suggested donations, which state officials collected from the Bulgarian people. Thousands of ‘volunteer’ workers laboured on the project.

Here amongst the icons and effigies of the great communist leaders, the new ruling class formed the symbolic centrepiece of their regime. The structure was designed by the esteemed architect Georgi Stoilov, who created a vast saucer, accompanied by a 107m tower emblazoned with a great red star – three times the size of the Soviet star that adorns the Kremlin in Moscow.

At the time of its construction Buzludzha was one of the most beloved and enduring icons of the communist world, with an ‘eternal flame’ burning on a dais set in the front courtyard. It was here that groups would gather for rallies; coach after coach making its way up the winding mountain paths, as the leaders of international communism would meet with the party faithful beneath the shadow of Buzludzha. On either side of the building’s entrance, large embossed letters spelt out rousing socialist slogans, often using an old dialect of Bulgarian that harked back to the nation’s proud and independent past: 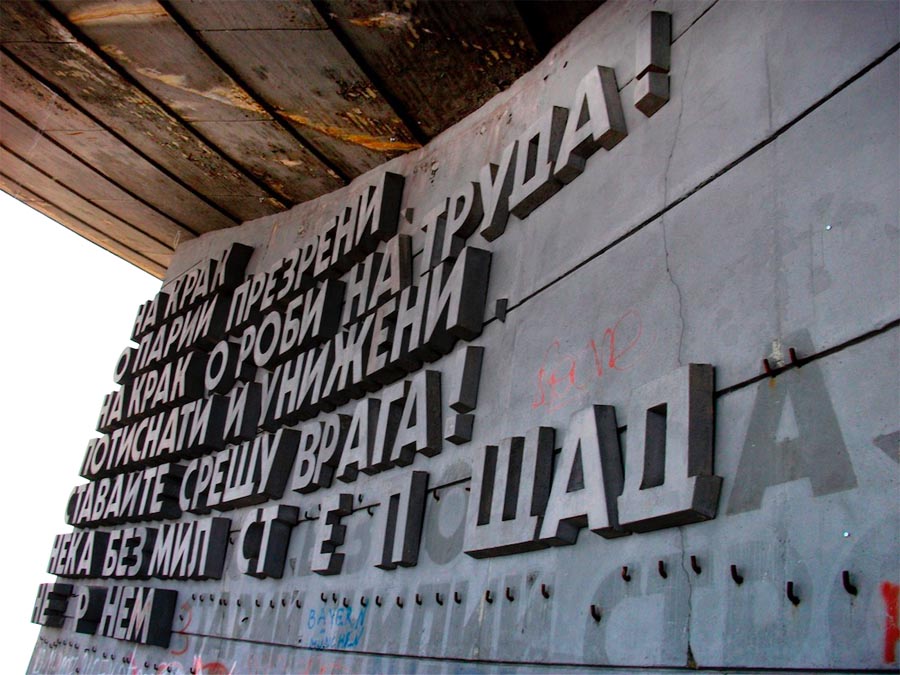 ON YOUR FEET, DESPISED COMRADES!
ON YOUR FEET YOU SLAVES OF LABOUR!
DOWNTRODDEN AND HUMILIATED,
STAND UP AGAINST THE ENEMY!

The monument was abandoned after the fall of Bulgarian communism in 1989, and above the doorway somebody scrawled a pointed message in bold red paint: “FORGET YOUR PAST,” the graffiti read, until finally being silenced just months ago.

To enter the Buzludzha monument now, picking your way up crumbling concrete stairs to find the vast circular conference hall above, is an experience rather like stepping inside the broken remnants of a hostile alien spacecraft. The first thing you’ll notice is the noise. The padded insulation material has fallen away from the ceiling in rotting chunks, while the metal panels above have been largely destroyed by the fierce winds that ravage this mountain peak. Jagged beams of light spill through the gaps, while the loose panels rattle and roar in a deafening scream of metal-on-metal. 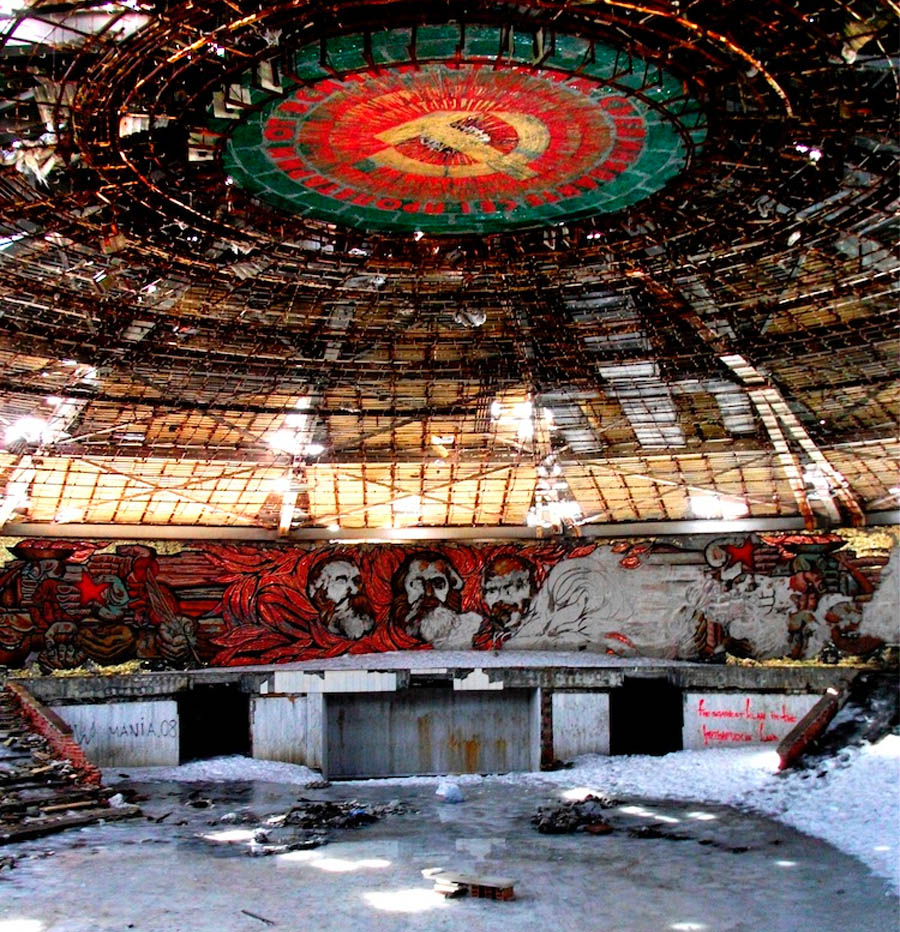 In the centre of the ceiling there hangs a vast hammer and sickle emblem, daubed in red and green paint, and emblazoned with a slogan that translates: “The Proletariat of Every Country Join Together”. The walls of this vast arena are studded with chips of coloured tile, which form one great mural; depicting scenes of labour and harvest, victorious battles and visions of the future. Above the pulpit appear the faces of Bulgaria’s first and last great communist leaders, Georgi Dimitrov and Todor Zhivkov, along with Dimitar Blagoev – philosopher and father of Bulgarian socialism. The opposite wall features the familiar faces of Engels, Marx and Lenin.

Meanwhile, the wings of the saucer, once an ornately stylised circular walkway, now appear as some kind of experimental wind tunnel. The murals here, created by a team of more than 60 Bulgarian artists, are in an even worse state than those inside the main arena; and where once thick glass protected visitors against the harsh mountain storms, now the bare concrete tunnel lies open to the elements.

There are yet more dark places to be explored, by the intrepid visitor to the Buzludzha monument. Dark passages lead deep beneath the main saucer itself, into the very foundations of the building – which contain a number of offices, boiler rooms and bathroom facilities.

While mainstream Bulgarian culture is fighting hard to forget the mistakes of the country’s past, the House-Monument of the Bulgarian Communist Party remains a popular destination amongst a select few; photographers and urban explorers have travelled halfway around the world for a pilgrimage to this otherworldly site, while the mysterious monument poses an irresistible attraction to daredevil youths from nearby towns. 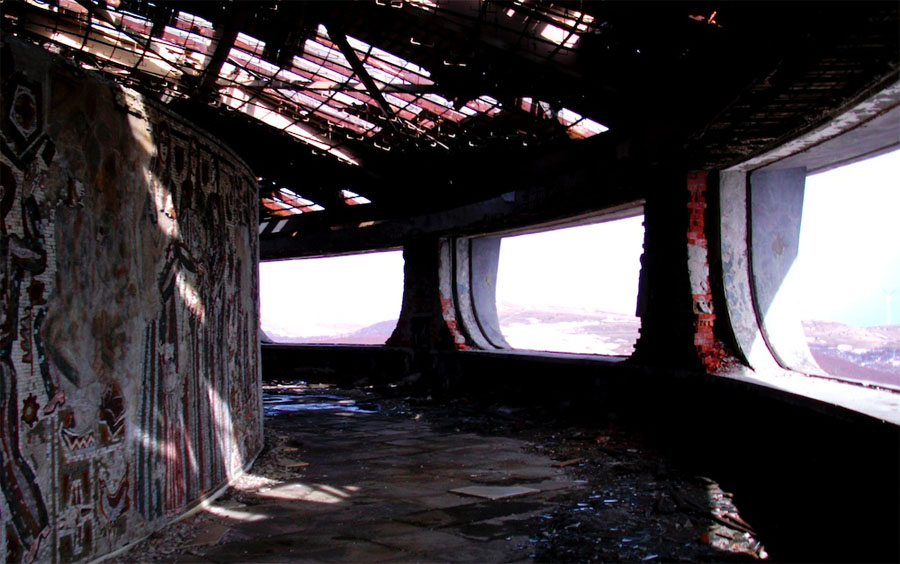 However, there is one further group who still have their eyes on the saucer. After the fall of Bulgarian Communism, the monument passed into the hands of the newly founded democratic state… and yet the communist party itself lived on as a minority political interest. Now they seek to reclaim their heritage, and on one of my visits to the site I met a group of men who were viewing the Buzludzha monument with a view to purchase it from the state – and return it to its former glory.

It seems now as though wheels are in motion; the graffiti around the building has mostly been painted over, while the entrance, once left open, is now secured with thick metal bars. It’s hard to say whether the plan is to preserve national heritage in the form of a museum, or perhaps to fan the fires of communism by resurrecting one of its most striking icons. Either way, the message being delivered to the Bulgarian people is clear: don’t forget your past.