Monument Valley (Navajo: Tsé Biiʼ Ndzisgaii, meaning valley of the rocks) is a region of the Colorado Plateau characterized by a cluster of vast sandstone buttes, the largest reaching 1,000 ft (300 m) above the valley floor. It is located on the Arizona–Utah border (around 36°59′N 110°6′WCoordinates: 36°59′N 110°6′W), near the Four Corners area. The valley lies within the range of the Navajo Nation Reservation and is accessible from U.S. Highway 163.

Monument Valley has been featured in many forms of media since the 1930s. Director John Ford used the location for a number of his best-known films, and thus, in the words of critic Keith Phipps:

Its five square miles have defined what decades of moviegoers think of when they imagine the American West. 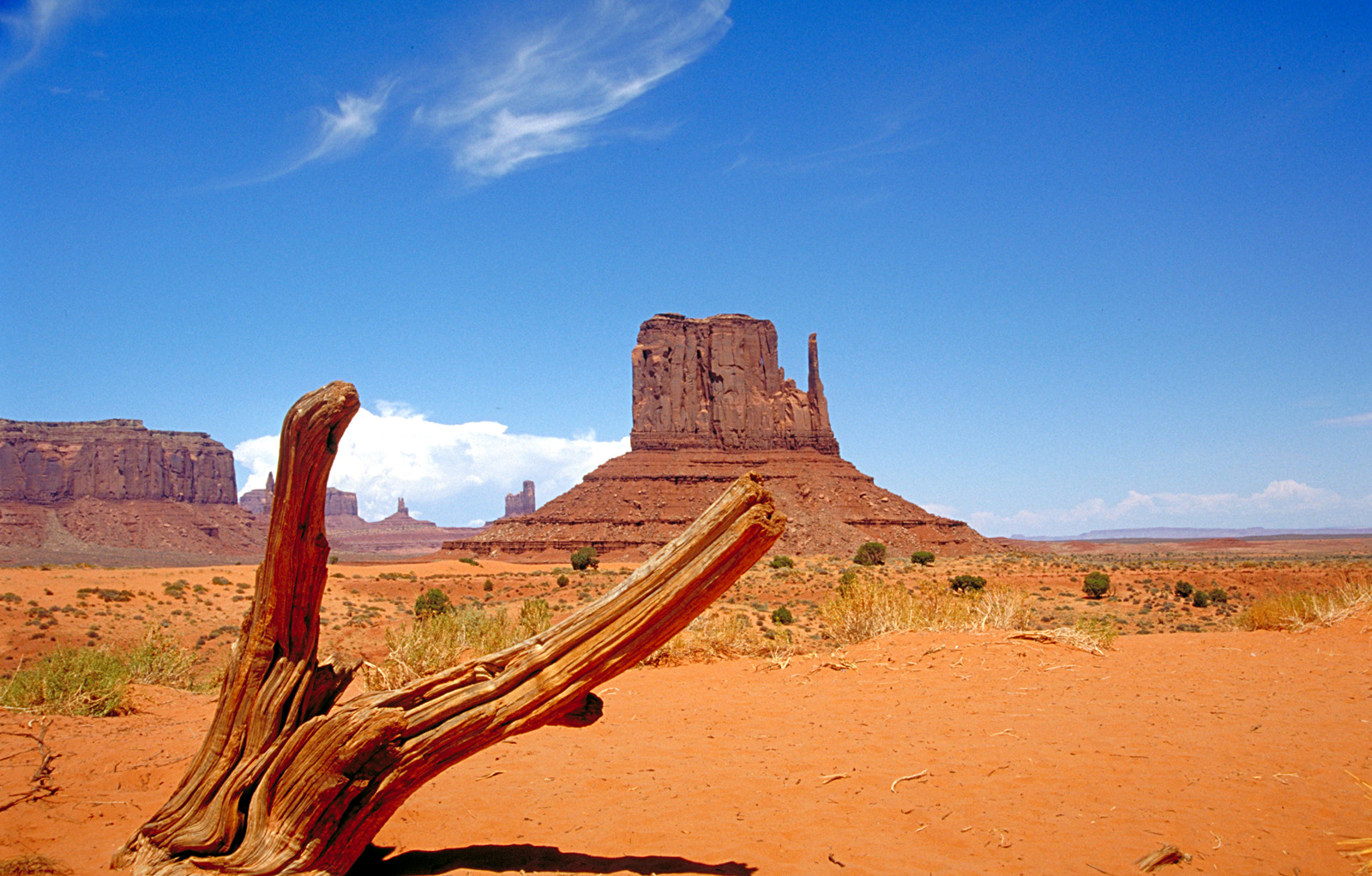 The area is part of the Colorado Plateau. The elevation of the valley floor ranges from 5,000 to 6,000 feet (1,500 to 1,800 m) above sea level. The floor is largely siltstone of the Cutler Group, or sand derived from it, deposited by the meandering rivers that carved the valley. The valley’s vivid red color comes from iron oxide exposed in the weathered siltstone. The darker, blue-gray rocks in the valley get their color from manganese oxide.

The buttes are clearly stratified, with three principal layers. The lowest layer is the Organ Rock Shale, the middle is de Chelly Sandstone, and the top layer is the Moenkopi Formation capped by Shinarump Conglomerate. The valley includes large stone structures including the famed “Eye of the Sun”.

Between 1945 and 1967, the southern extent of the Monument Upwarp was mined for uranium, which occurs in scattered areas of the Shinarump Conglomerate; vanadium and copper are associated with uranium in some deposits. 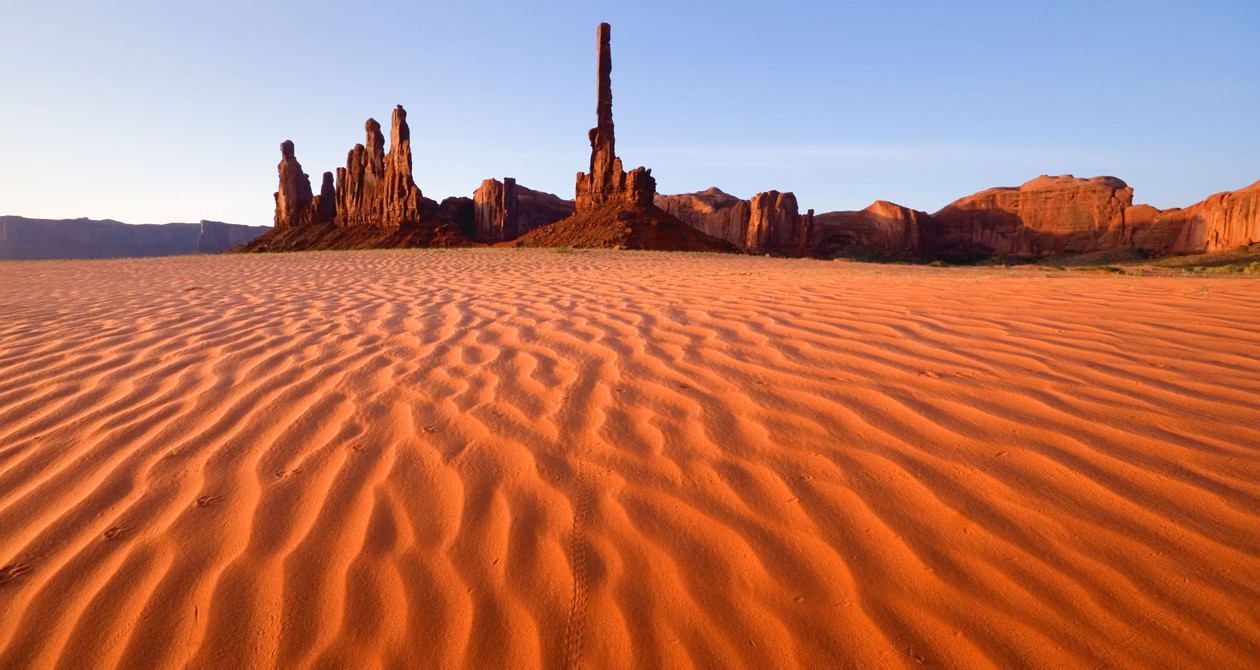 Monument Valley experiences a desert climate with cold winters and hot summers. While the summers may be hot, the heat is tempered by region’s aridity and high altitude. Although the valley experiences an average of 54 days above 90 °F (32 °C) annually, summer highs rarely exceed 100 °F (38 °C). Summer nights are comfortably cool, and temperatures drop quickly after sunset. Winters are cold, but daytime highs are usually above freezing. Even in the winter, temperatures below 0 °F (−18 °C) are uncommon, though possible. Monument Valley receives an occasional light snowfall in the winter; however, it usually melts within a day or two. 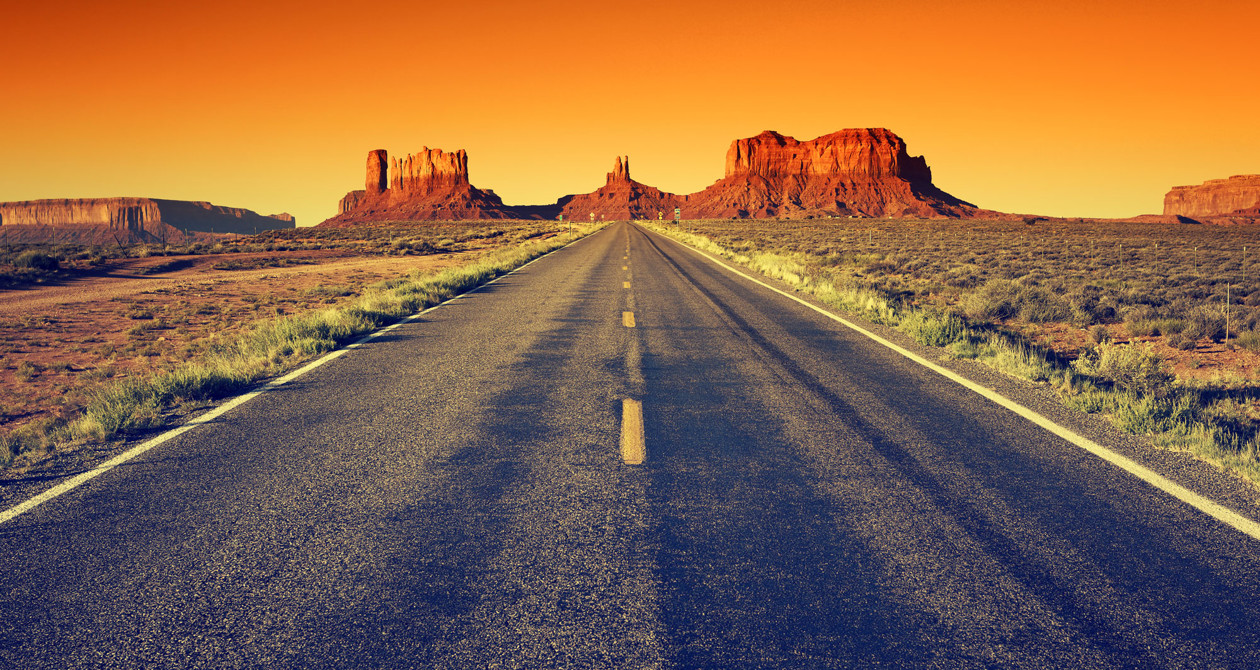