Oradour-sur-Glane (Occitan: Orador de Glana) is a commune in the Haute-Vienne department in the Limousin region in west-central France.

The original population was destroyed on 10 June 1944, when 642 of its inhabitants, including women and children, were massacred by a German Waffen-SS company. A new village was built after the war on a nearby site but on the orders of the then French president, Charles de Gaulle, the original has been maintained as a permanent memorial and museum.

In February 1944, 2nd SS Panzer Division (“Das Reich”) was stationed in the Southern French town of Valence-d’Agen, north of Toulouse, waiting to be resupplied with new equipment and freshly trained troops. After the D-Day invasion of Normandy, the division was ordered to make its way across the country to stop the Allied advance. One of the division’s units was the 4th SS Panzer Grenadier Regiment (“Der Führer”). Its staff included SS-Standartenführer Sylvester Stadler as regimental commander, SS-Sturmbannführer Adolf Diekmann as commander of the regiment’s 1st Battalion and SS-Sturmbannführer Otto Weidinger, who was designated Stadler’s successor as regimental commander and was with the regiment for familiarisation purposes. Command of “Der Führer” passed from Stadler to Weidinger on 14 June.

Early on the morning of 10 June 1944, Diekmann informed Weidinger at regimental headquarters that he had been approached by two members of the Milice; a paramilitary force belonging to the Vichy Regime. They claimed that a Waffen-SS officer was being held by the Resistance in Oradour-sur-Vayres, a nearby village. The captured German was alleged to be SS-Sturmbannführer Helmut Kämpfe, commander of the 2nd SS Panzer Reconnaissance Battalion (another unit of the “Das Reich” division), who may have been captured by the Maquis du Limousin the day before. 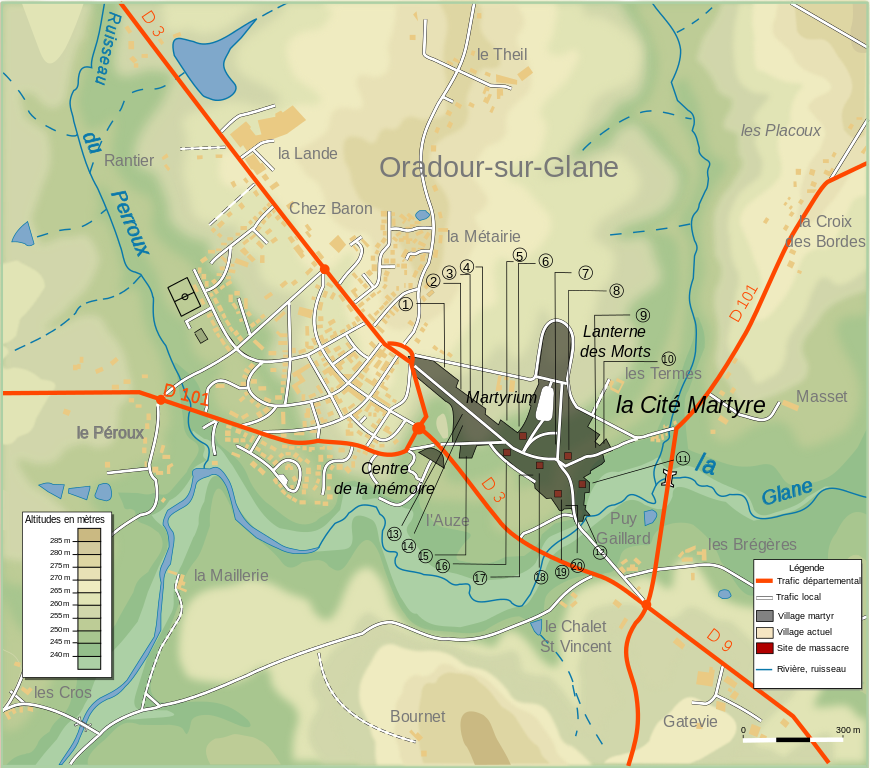 On 10 June, Diekmann’s battalion sealed off Oradour-sur-Glane, having confused it with nearby Oradour-sur-Vayres, and ordered all the townspeople – and anyone who happened to be in or near the town – to assemble in the village square, ostensibly to have their identity papers examined. In addition to the residents of the village, the SS also apprehended six people who did not live there but had the misfortune to be riding their bikes through the village when the Germans arrived.

All the women and children were locked in the church while the village was looted. Meanwhile, the men were led to six barns and sheds where machine guns were already in place.

According to the account of a survivor, the soldiers began shooting at them, aiming for their legs so that they would die slowly. Once the victims were no longer able to move, the soldiers covered their bodies with fuel and set the barns on fire. Only six men escaped; one of them was later seen walking down a road heading for the cemetery and was shot dead. In all, 190 men perished.

The soldiers proceeded to the church and placed an incendiary device there. After it was ignited, women and children tried to escape through the doors and windows of the church, but they were met with machine-gun fire. A total of 247 women and 205 children died in the carnage. Only 47-year-old Marguerite Rouffanche survived. She slid out by a rear sacristy window, followed by a young woman and child. All three were shot; Marguerite Rouffanche was wounded and her companions were killed. She crawled to some pea bushes behind the church, where she remained hidden overnight until she was rescued the following morning. Another group of about twenty villagers had fled Oradour-sur-Glane as soon as the soldiers had appeared. That night, the village was partially razed.

A few days later, survivors were allowed to bury the dead. 642 inhabitants of Oradour-sur-Glane had been murdered in a matter of hours. Adolf Diekmann claimed that the episode was a just retaliation for partisan activity in nearby Tulle and the kidnapping of Helmut Kämpfe.

On 12 January 1953, a military tribunal in Bordeaux heard the case against the surviving 65 of the approximately 200 German soldiers who had been involved. Only 21 of them were present, as many were living in East Germany, which would not allow them to be extradited. Seven of them were Germans, but 14 were Alsatians, French nationals of German ethnicity who had been regarded by the Nazis as members of the Reich. All but one of them claimed to have been drafted into the Waffen-SS by force. Such forced conscripts from Alsace and Lorraine called themselves the malgré-nous, meaning “against our will”.

The trial caused a huge protest in Alsace, forcing the French authorities to split the tribunal into two separate proceedings, according to the nationality of the defendants. On 11 February, 20 defendants were found guilty. Continuing uproar (including calls for autonomy) in Alsace pressed the French parliament to pass an amnesty law for all the malgré-nous on 19 February, and the convicted Alsatians were released shortly afterwards. This, in turn, caused bitter protests in the Limousin region.

By 1958, all the German defendants had been released as well. General Heinz Lammerding of the Das Reich division, who had given the orders for the measures against the Resistance, died in 1971 after a successful entrepreneurial career. At the time of the trial he lived in Düsseldorf, which was located inside the British occupation zone of West Germany, and the French government never obtained his extradition from the British authorities.

The last trial against a former Waffen-SS member took place in 1983. Shortly before, former SS-Obersturmführer Heinz Barth was tracked down in the German Democratic Republic. Barth participated in the Oradour-sur-Glane massacre as a platoon leader in the “Der Führer” regiment, in charge of 45 soldiers. He was one of several war criminals charged with giving orders to shoot 20 men in a garage. Barth was sentenced to life imprisonment by the First Senate of the City Court of Berlin. He was released from prison in the reunified Germany in 1997, and he died in August 2007.

After the war, General Charles de Gaulle decided the village should never be rebuilt, but would remain a memorial to the cruelty of the Nazi occupation. 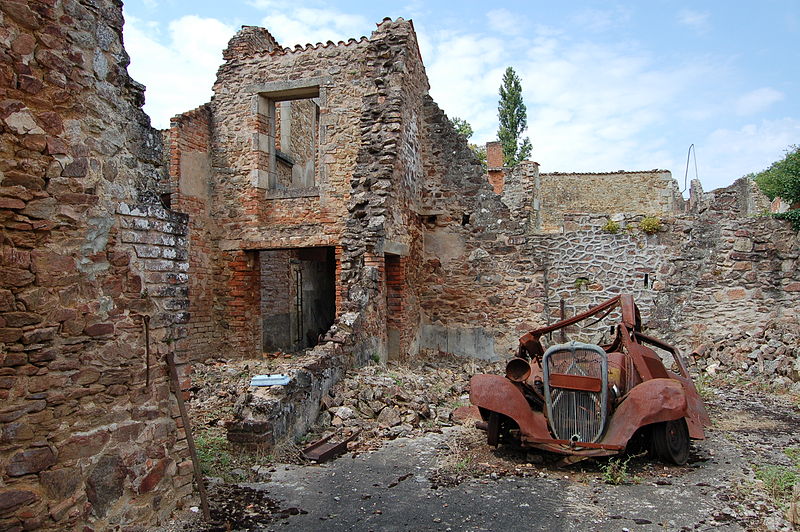 The new village of Oradour-sur-Glane (population 2,188 in 2006), northwest of the site of the massacre, was built after the war. The ruins of the original village remain as a memorial to the dead and to represent similar sites and events.

In 1999 French president Jacques Chirac dedicated a memorial museum, the Centre de la mémoire d’Oradour, near the entrance to the Village Martyr (“martyred village”). Its museum includes items recovered from the burned-out buildings: watches stopped at the time their owners were burned alive, glasses melted from the intense heat, and various personal items.

On 6 June 2004, at the commemorative ceremony of the Normandy invasion in Caen, German chancellor Gerhard Schröder pledged that Germany would not forget the Nazi atrocities and specifically mentioned Oradour-sur-Glane.

On 4 September 2013, German president Joachim Gauck and French president François Hollande visited the ghost village of Oradour-sur-Glane. This was the first time a German president had come to the site of one of the biggest World War II massacres on French soil. A joint news conference broadcast by the two leaders followed their tour of the site.

Upon entering Oradour-sur-Glane, SS-Sturmbannführer Diekmann had received orders from his regimental commander, SS-Standartenführer Stadler, to only have the mayor of the town name thirty people who could serve as hostages in exchange for SS-Sturmbannführer Kämpfe; however, Diekmann instead ordered the population exterminated and the village burned to the ground.

Protests followed from Generalfeldmarschall Erwin Rommel; General Gleiniger, German commander in Limoges; and the Vichy government. SS-Standartenführer Stadler felt Diekmann had far exceeded his orders and began a judicial investigation. Diekmann, 29 years old, was killed in action shortly afterwards during the Battle of Normandy, and a large number of the third company, which had committed the massacre, were themselves killed in action within a few days, and the investigation was suspended. 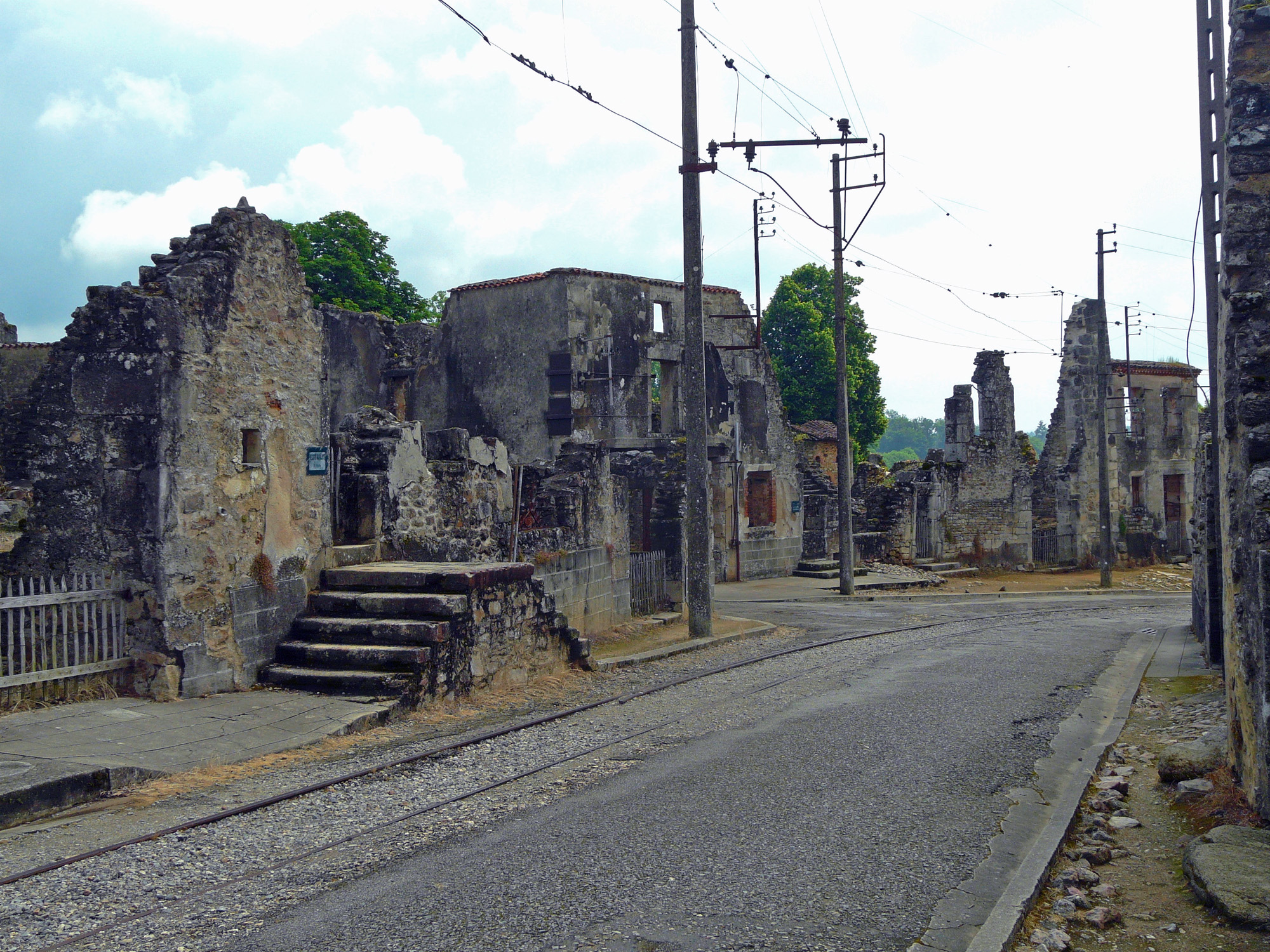 The massacre at Oradour-sur-Glane involved men, women and children, some as young as one week, and some as old as ninety. Oradour-sur-Glane was not the only collective punishment reprisal action committed by the Waffen-SS: other well-documented examples include the French towns of Tulle, Ascq, Maillé, Robert-Espagne, and Clermont-en-Argonne; the Polish villages Michniów, Wanaty and Krasowo-Częstki; the Soviet village of Kortelisy (in what is now Ukraine); the Lithuanian village of Pirčiupiai; the Czechoslovakian villages of Ležáky and Lidice (in what is now the Czech Republic); the Greek towns of Kalavryta and Distomo; the Dutch town of Putten; the Yugoslavian towns of Kragujevac and Kraljevo (in what is now Serbia) and in the village of Dražgoše (in what is now Slovenia). ; the Norwegian village of Telavåg; the Italian villages of Sant’Anna di Stazzema and Marzabotto. On Friday 13 April 1945, in Germany itself, Waffen-SS along with troops from the Luftwaffe and the Hitler-Jugend, placed 1,000-1,100 political prisoners in transit from the Dora-Mittlebau concentration camp into a barn in the town of Gardelegen, set it afire and machine-gunned any who tried to escape. Furthermore, the Waffen SS executed hostages (random or selected in suspect groups) throughout France as a deterrent to resistance.