The Waitomo Glowworm Caves attraction is a cave at Waitomo on the North Island of New Zealand, known for its population of glowworms, Arachnocampa luminosa. This species is found exclusively in New Zealand. They are around the size of an average mosquito. This cave is part of the Waitomo Caves system that includes the Ruakuri Cave and the Aranui Cave.

The attraction has a modern visitor centre at the entrance, largely designed in wood. There are organized tours that include a boat ride under the glowworms. 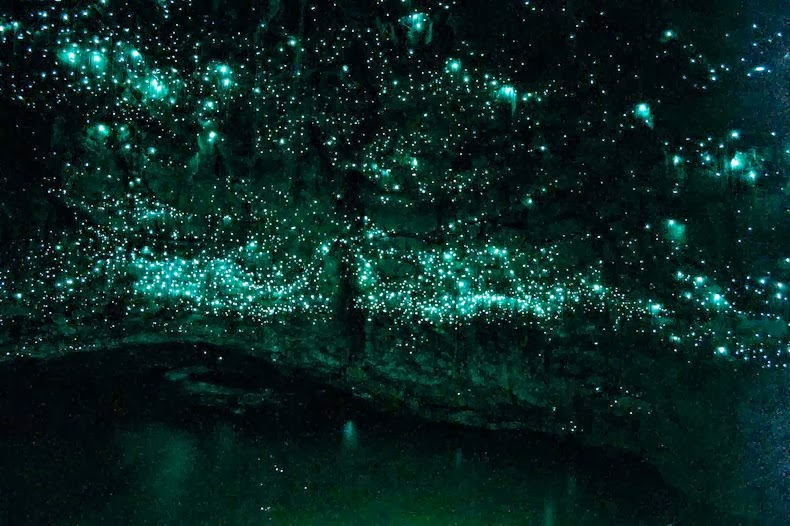 The name “Waitomo” comes from the Māori words wai, water and tomo, hole or shaft. The local Māori people had known about the caves for quite some time before the local Māori Chief Tane Tinorau and an English surveyor, Fred Mace, did an extensive exploration in 1887. Their exploration was conducted with candlelight on a raft going into the cave where the stream goes underground. This is now the exit for the cave. As they began their journey, they came across the Glowworm Grotto and were amazed by the twinkling glow coming from the ceiling. As they travelled further into the cave by poling themselves towards an embankment, they were also astounded by the limestone formations. These formations surrounded them in all shapes and sizes.

They returned many times after and Chief Tane independently discovered the upper level entrance to the cave, which is now the current entrance. Tane Tinorau and his wife Huti, by 1889, had opened the cave to visitors and were leading groups for a small fee. The administration of the cave was taken over by the government in 1906 after there was an escalation in vandalism. In 1910, the Waitomo Caves Hotel was built to house the many visitors.

In 1989, the land and cave were returned to the descendants of Chief Tane Tinorau and Huti. They now receive a percentage of the cave’s revenue and are involved in the management and development of the cave. These descendants encompass many of the employees of the caves today.

The Waitomo Glowworm Caves are located in the southern Waikato region of the North Island of New Zealand, 12 km northwest of Te Kuiti. This cave is about 2 hours south of Auckland, 1 hour south of Hamilton, and 2 hours west of Rotorua by car. The directions to the Caves are to exit State Highway 3 onto Waitomo Caves Road and to continue on the road for about 8 km. 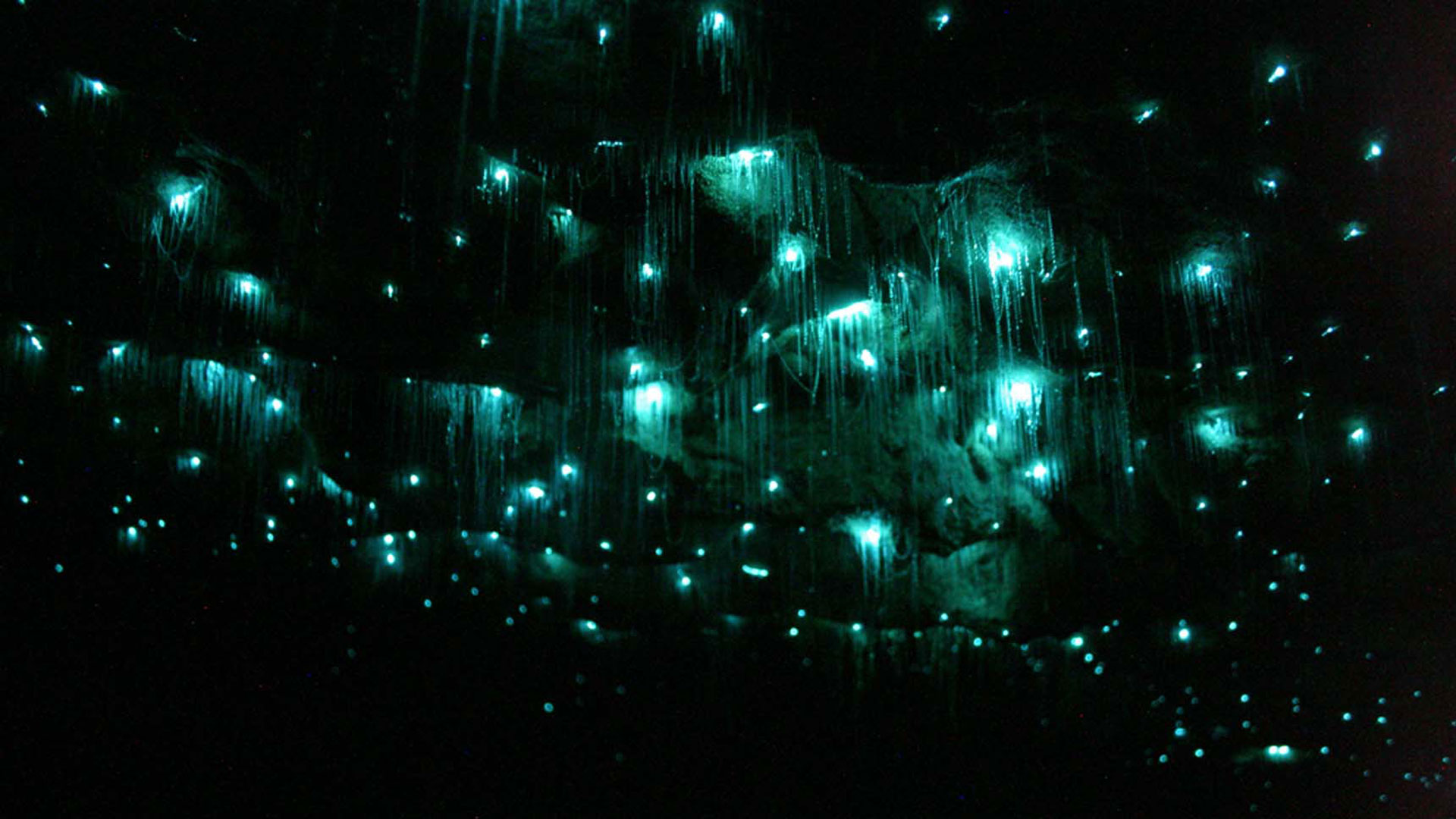 Geological and volcanic activity has created around 300 known limestone caves in the Waitomo region over the last 30 million years.

The limestone formations in the Waitomo Glowworm Caves were formed when the region was still under the ocean about 30 million years ago. The limestone is composed of fossilized corals, seashells, fish skeletons, and many small marine organisms on the sea beds. Over millions of years, these fossilized rocks have been layered upon each other and compressed to create limestone and within the Waitomo region the limestone can be over 200 m thick.

The caves began to form when earth movement caused the hard limestone to bend and buckle under the ocean and rise above the sea floor. As the rock was exposed to air, it separated and created cracks and weaknesses that allowed for water to flow through them dissolving the limestone and over millions of years large caves were formed.

The stalactites, stalagmites, and other cave formations grew from water dripping from the ceiling or flowing over the walls and leaving behind limestone deposits. The stalagmites form upward from the floor while the stalactites form from the ceiling. When these formations connect they are called pillars or columns and if they twist around each other they are called helicti. These cave decorations take millions of years to form given that the average stalactite grows one cubic centimetre every 100 years.

The most renowned animal in the cave is the glowworm Arachnocampa luminosa. There are several small underwater lakes that were created by freshwater creeks or brooks.

The walls of the caves are covered with a variety of fungi including the cave flower (a distant relation to the genus Pleurotus) that is actually a mushroom-like fungus. The most common animals in the caves are insects. This includes albino cave ants, giant crickets, and of course the glowworms. 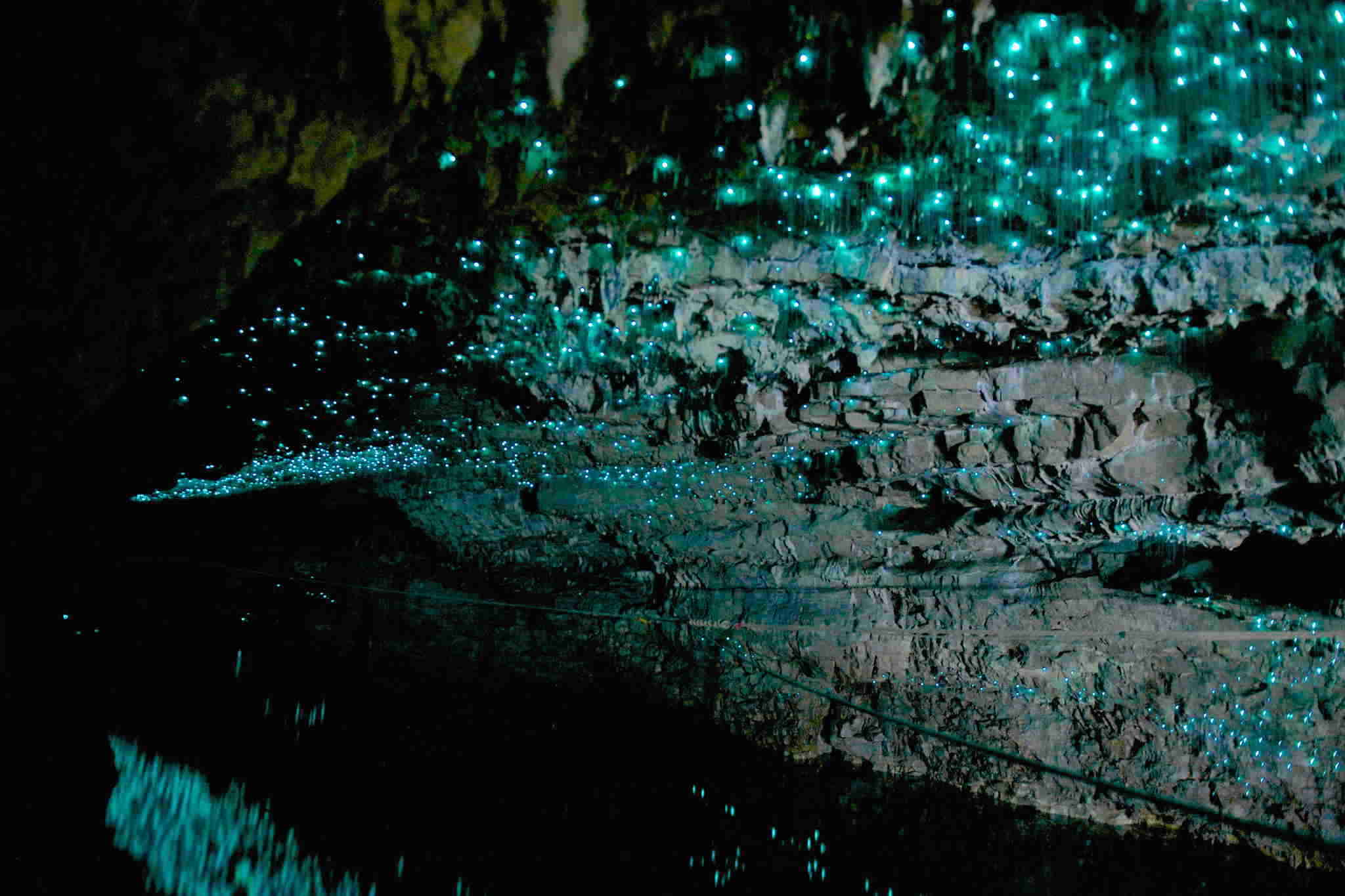 The glowworms of the Waitomo Glowworm Caves are closely guarded by a Scientific Advisory Group. This group has automated equipment that continually monitors the air quality especially the carbon dioxide levels, rock and air temperature, and humidity. Data from this equipment is carefully analyzed by specialist staff. The advisory group uses the information to establish how the cave should be managed. They determine if and when air flow patterns should be changed and how many people are allowed to visit the caves each day.

The guided tour through the Waitomo Glowworm Caves brings the visitor through three different levels and begins at the top level of the cave and the Catacombs. The levels are linked by the Tomo, which is a 16 m vertical shaft made of limestone. The second level is called the Banquet Chamber. This level is where early visitors stopped to eat and there is evidence of this in the smoke on the ceiling of the chamber. From here it may be possible to link back to the upper level to see the largest formation called the Pipe Organ but on busy days this area is closed to the public because the build-up of carbon monoxide may be hazardous.

The third and final level goes down into the Cathedral, demonstration platform, and the jetty. The Cathedral is an enclosed area with rough surfaces, now paved, and is about 18 m high, giving it good acoustics. A number of famous singers and choirs have performed here including Dame Kiri Te Kanawa.

The tour concludes with a boat ride through the Glowworm Grotto. The boat takes the visitor onto the underground Waitomo River where the only light comes from the tiny glowworms creating a sky of living lights.