Cancun Underwater Museum MUSA It is a Non Profit Organization based in Cancun México devoted to the Art of Conservation. A total of 500 sculptures in three different galleries comprise its collection at the end of 2013. A series of sculptures by Jason deCaires Taylor and five other Mexican sculptors placed underwater off the coast of Isla de Mujeres and Cancún, Mexico. The project began in November 2009 with placement of a hundred statues in shallow waters of the Cancún National Marine Park, which had been previously damaged by storms.

The story started when two simple people got together at the beginning of 2008, and decided that building the best and the largest Underwater Museum of Art, in the World, was possible, despite both working in different environments: The Federal Government and the Private Sector. To begin with the story, Dr. Jaime González Cano, the Director of the National Park Costa Occidental Isla Mujeres, Punta Cancun y Punta Nizuc, wanted to relive in some degree, the number of visitors that come by the thousands to Cancún every year to swim and dive in the natural reefs of this wonderful protected area. He suggested to the President of the Cancun Nautical Association, at the time Roberto Díaz Abraham, the idea of taking snorkelers and divers to an area where concrete reef balls with some corals had been placed at the beginning of 2005. By then, january 2008, Roberto believed that it would take many more years to these artificial gardens to flourish and become an attraction, so he did not care for this idea. Dr. González is one of those persons that doesn’t take no for an answer, so he continued looking for solutions until he found in the powerful Internet by referral of Tod Barber , the underwater art of the British Artist Jason deCaires Taylor. Admiring Jason´s work Dr. González´ mind was blown away. He called and asked the Nautical Association President if he would be interested in building together an underwater sculptural park with Jason´s work to begin with. Roberto immediately accepted, since he is also a ceramic artist and sculptor too: “Love at first sight”. With the agreement, Jaime contacted Jason and asked him to come over to Cancun from London in order to see if he could work together with them under a very tight budget. Within days, Jason was in Cancun ready to go forward with the project. Government resources were available for funding Community Conservation projects, but an individual was required to sign for them and come up with 20% of matching funds. Roberto Díaz volunteered with the support of all the members of the Cancun´s Nautical Association and the company he works as General Manager, Aquaworld, as well as many other companies and individuals. MUSA became a Community project. They just had met Jason and trusted him with a sizable deposit . By the same token he trusted Jaime and Roberto by leaving all his life behind in London. Jason is a very creative artist filled with ideas and projects, but he is also one of those few individuals that sticks to what he says and get the output even better and earlier than what he had promised. MUSA was created and Jason was contracted to do the initial work, as well as other Mexican sculptors. 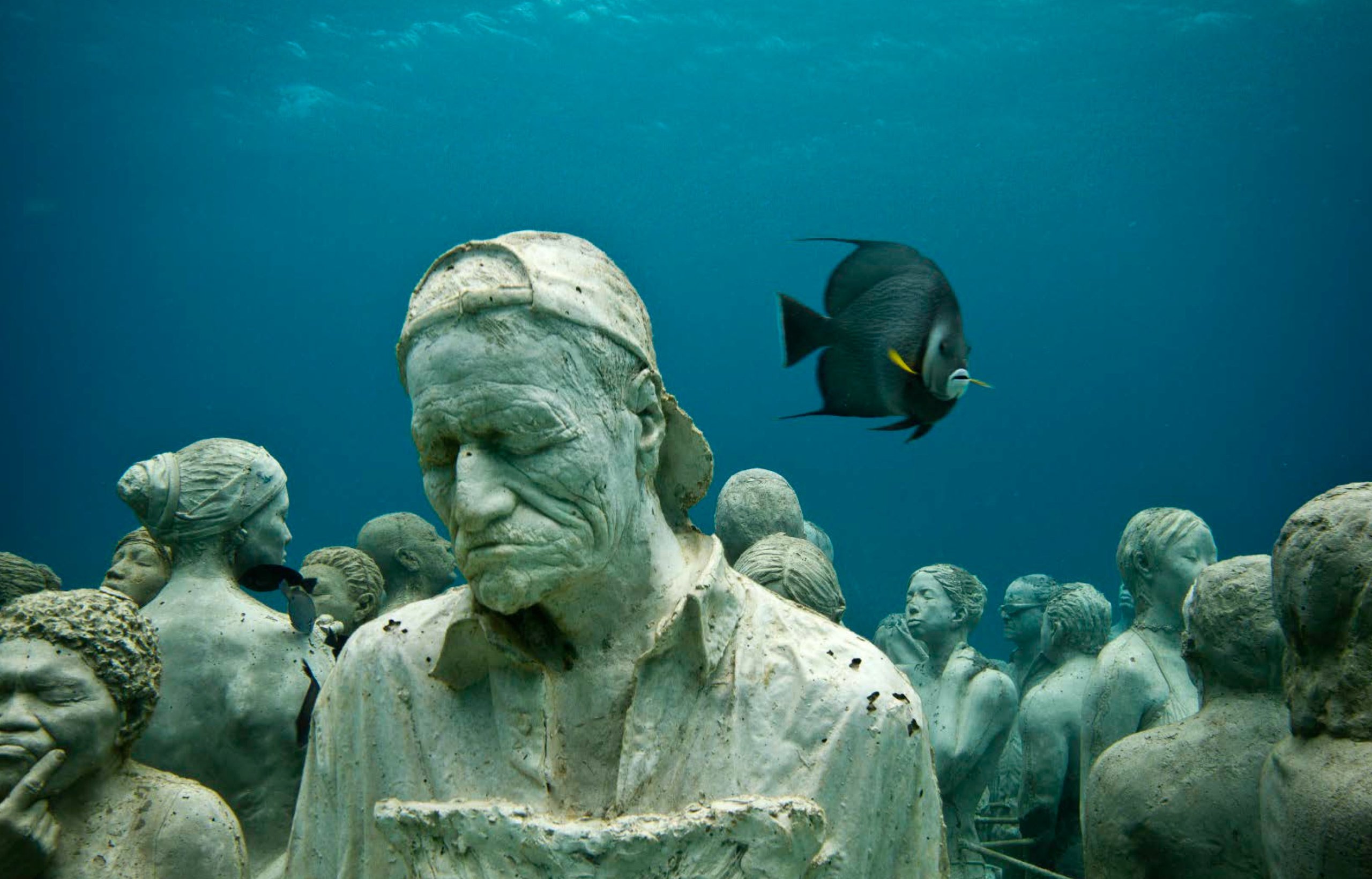 After Five years of MUSA foundation, six artists have their work placed at the bottom of the ocean. At the end of 2013, a total of 500 concrete sculptures comprise the MUSA collection. In Manchones exhibit room the Museum gathers 477 elements while in Nizuc there are 23. Another 26 replicas have been located at a Visitor Center at Kukulcan Mall in the Hotel Zone. More than 100,000 visitors visited MUSA during 2013 out of 500,000 that visit the Government Protected Area. Mission in progress, since this was the original goal. 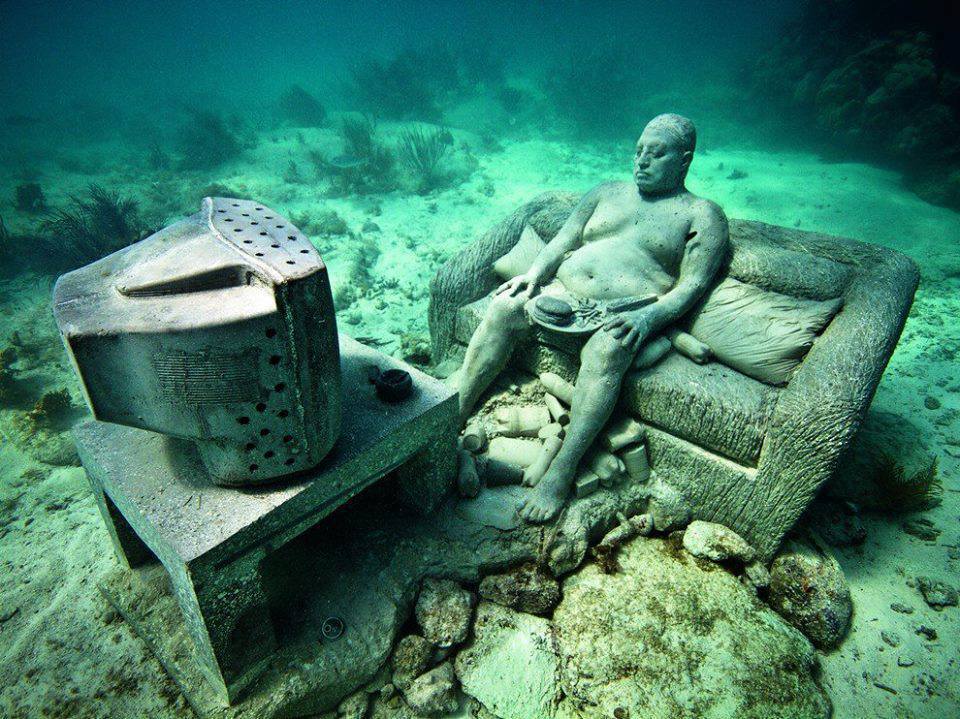 The sculptures are created with pH-neutral marine concrete and are made to resemble members of the local community. The artist planned for the sculptures to become artificial reefs. Some corals (such as fire coral) was planted on and near the initial sculptures. The statues themselves however will also become covered with coral over time, due to the natural propagation of corals already present in the vicinity. 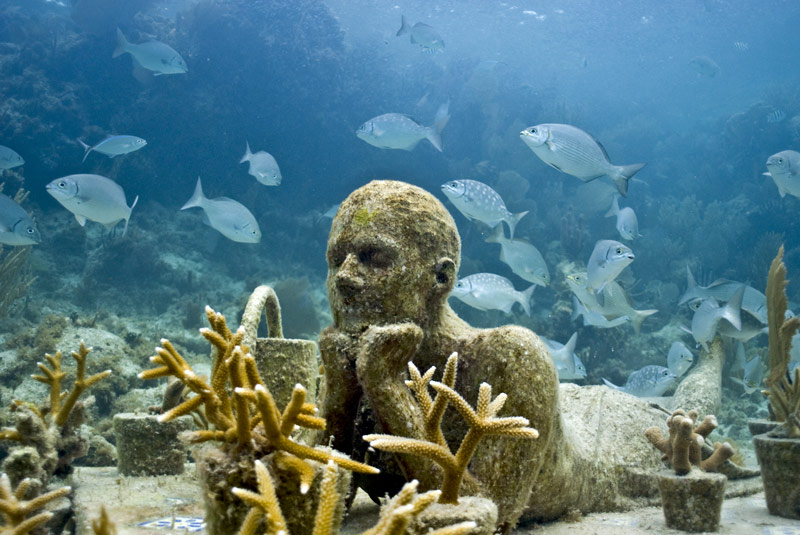 Three galleries have been created, two underwater and one in land. MUSA obtained a permit to sink 1,200 structures in 10 different areas within the National Marine Park. So far only two have been developed, Manchones with 477 sculptures and Punta Nizuc with 23 beautiful structures. 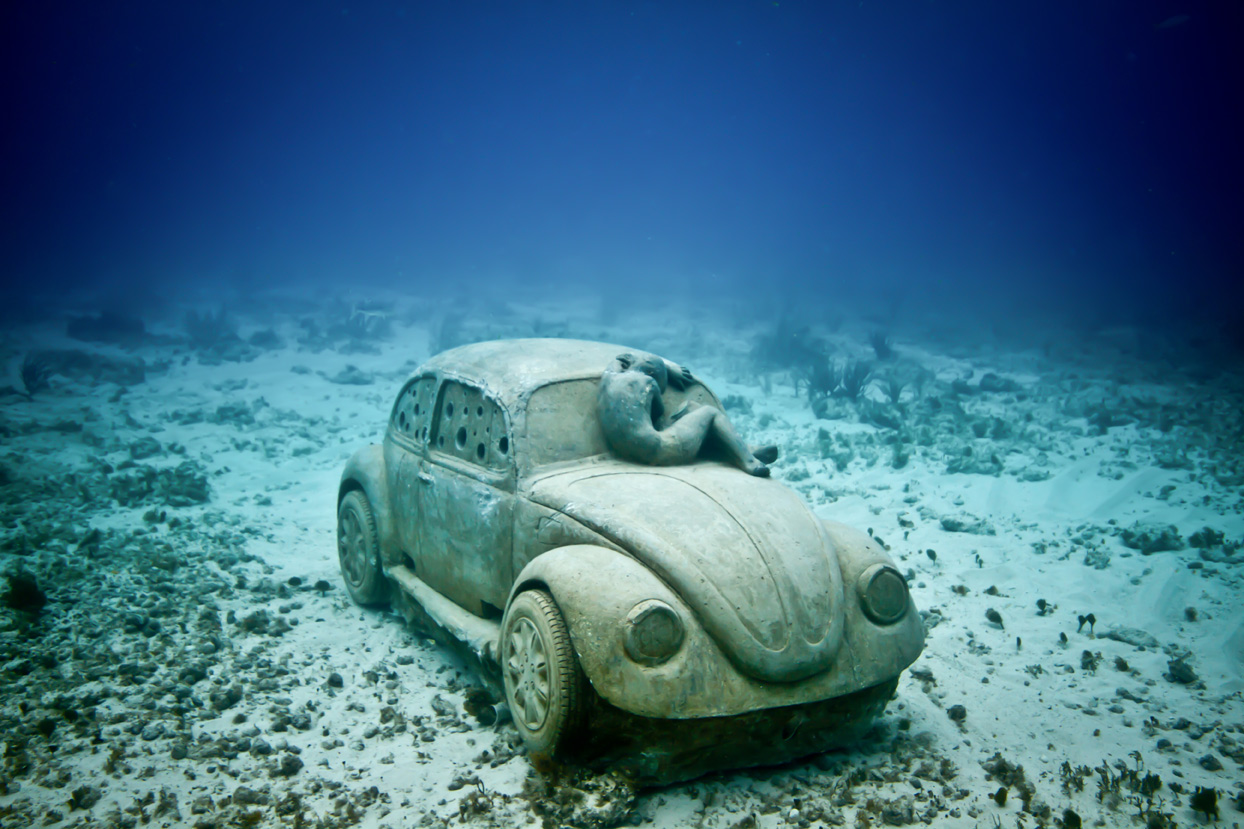 The third exhibit room is in a Mall, Plaza Kukulcán, with 26 replicas and original. You may find the original ceramic sculpture by Roberto Díaz named The Ocean Muse. RobertoDíaz is Co founder of MUSA together with Dr. Jaime González Cano, the Director of the Marine Park. 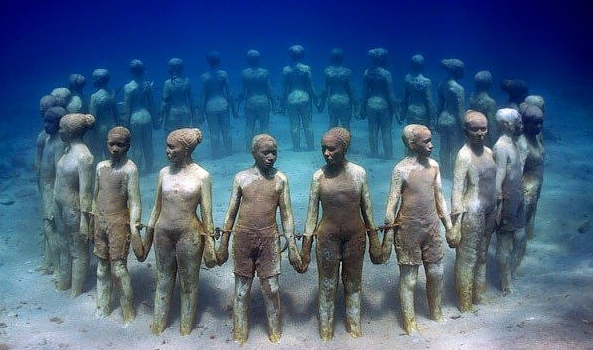 A total of 500 sculptures were planned, to be installed by the end of 2010. Snorkelers, scuba divers, and tourists in glass-bottom boat visit the underwater installation. A new installation is coming this summer by the Cuban sculptor Elier Amado Gil under the name of Blessings. This new installation will be placed in a new Galerie: Chitales.