Salar de Uyuni (or Salar de Tunupa) is the world’s largest salt flat at 10,582 square kilometers (4,086 sq mi). It is located in the Potosí and Oruro departments in southwest Bolivia, near the crest of the Andes and is at an elevation of 3,656 meters (11,995 ft) above mean sea level.

The Salar was formed as a result of transformations between several prehistoric lakes. It is covered by a few meters of salt crust, which has an extraordinary flatness with the average altitude variations within one meter over the entire area of the Salar. The crust serves as a source of salt and covers a pool of brine, which is exceptionally rich in lithium. It contains 50 to 70% of the world’s lithium reserves, which is in the process of being extracted. The large area, clear skies, and the exceptional flatness of the surface make the Salar an ideal object for calibrating the altimeters of Earth observation satellites. 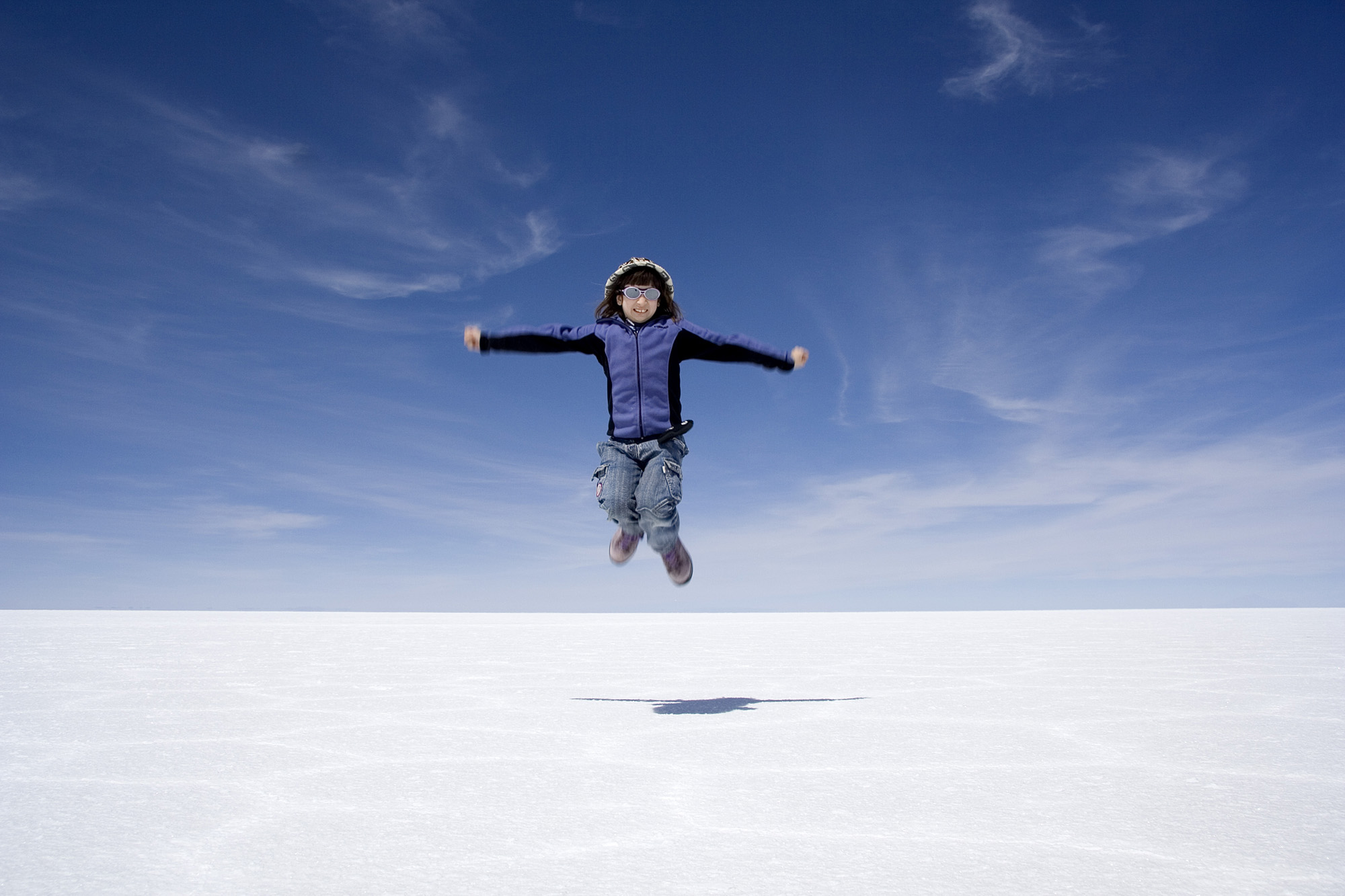 The Salar serves as the major transport route across the Bolivian Altiplano and is a major breeding ground for several species of pink flamingos. Salar de Uyuni is also a climatological transitional zone since the towering tropical cumulus congestus and cumulus incus clouds that form in the eastern part of the salt flat during the summer cannot permeate beyond its drier western edges, near the Chilean border and the Atacama Desert.

Salar de Uyuni is part of the Altiplano of Bolivia in South America. The Altiplano is a high plateau, which was formed during uplift of the Andes mountains. The plateau includes fresh and saltwater lakes as well as salt flats and is surrounded by mountains with no drainage outlets.

The geological history of the Salar is associated with a sequential transformation between several vast lakes. Some 30,000 to 42,000 years ago, the area was part of a giant prehistoric lake, Lake Minchin. Its age was estimated from radiocarbon dating of shells from outcropping sediments and carbonate reefs and varies between reported studies. Lake Minchin (named after Juan B. Minchin of Oruro) later transformed into paleolake Tauca having a maximal depth of 140 meters (460 ft), and an estimated age of 13,000 to 18,000 or 14,900 to 26,100 years, depending on the source. The youngest prehistoric lake was Coipasa, which was radiocarbon dated to 11,500 to 13,400 years ago. When it dried, it left behind two modern lakes, Poopó Lake and Uru Uru Lake, and two major salt deserts, Salar de Coipasa and the larger Salar de Uyuni. Salar de Uyuni spreads over 10,582 square kilometers (4,086 sq mi), which is roughly 100 times the size of the Bonneville Salt Flats in the United States. Lake Poopó is a neighbor of the much larger Lake Titicaca. During the wet season, Titicaca overflows and discharges into Poopó, which, in turn, floods Salar De Coipasa and Salar de Uyuni. 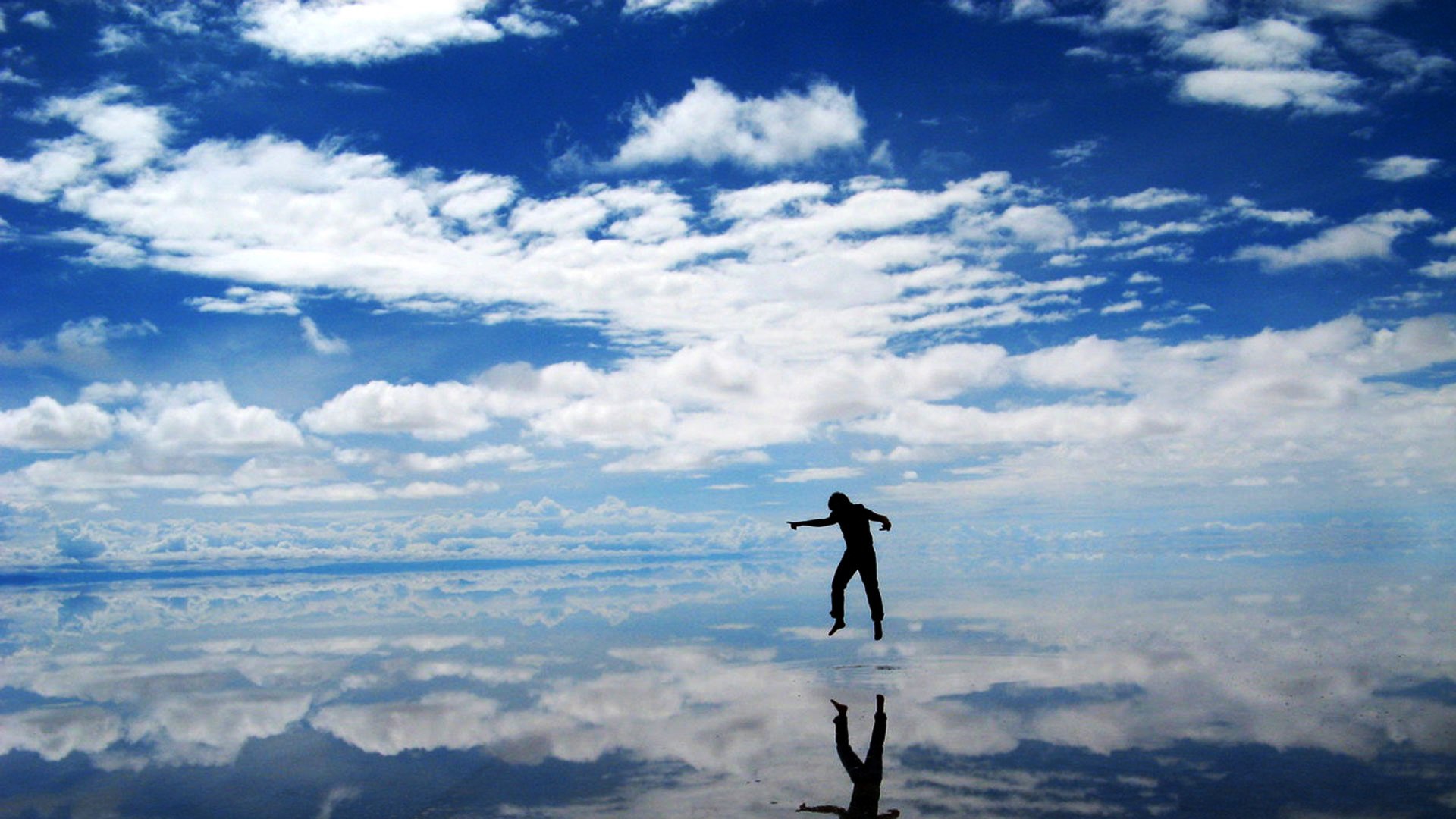 Lacustrine mud that is interbedded with salt and saturated with brine underlies the surface of Salar de Uyuni. The brine is a saturated solution of sodium chloride, lithium chloride and magnesium chloride in water. It is covered with a solid salt crust varying in thickness between tens of centimeters and a few meters. The center of the Salar contains a few “islands”, the remains of the tops of ancient volcanoes submerged during the era of Lake Minchin. They include unusual and fragile coral-like structures and deposits that often consist of fossils and algae.

The Salar contains large amounts of sodium, potassium, lithium and magnesium (all in the chloride forms of NaCl, KCl, LiCl and MgCl2, respectively), as well as borax. Of those, lithium is arguably most important as it is a vital component of many electric batteries. With estimated 9,000,000 tonnes (8,900,000 long tons; 9,900,000 short tons), Bolivia holds about 43% of the world’s lithium reserves; most of those are located in the Salar de Uyuni.

Lithium is concentrated in the brine under the salt crust at a relatively high concentration of about 0.3%. It is also present in the top layers of the porous halite body lying under the brine; however the liquid brine is easier to extract, by boring into the crust and pumping out the brine. The brine distribution has been monitored by the Landsat satellite and confirmed in ground drilling tests. Following those findings, an American-based international corporation has invested $137 million to develop lithium extraction. However, lithium extraction in the 1980s and 1990s by foreign companies met strong opposition of the local community. Despite their poverty, locals believed that the money infused by mining would not reach them.

There is currently no mining plant at the site, and the Bolivian government does not want to allow exploitation by foreign corporations. Instead, it intends to build its own pilot plant with a modest annual production of 1,200 tonnes (1,200 long tons; 1,300 short tons) of lithium and to increase it to 30,000 tonnes (30,000 long tons; 33,000 short tons) by 2012.

Because of its location, large area and flatness, the Salar is a major car transport route across the Bolivian Altiplano, except when seasonally covered with water. 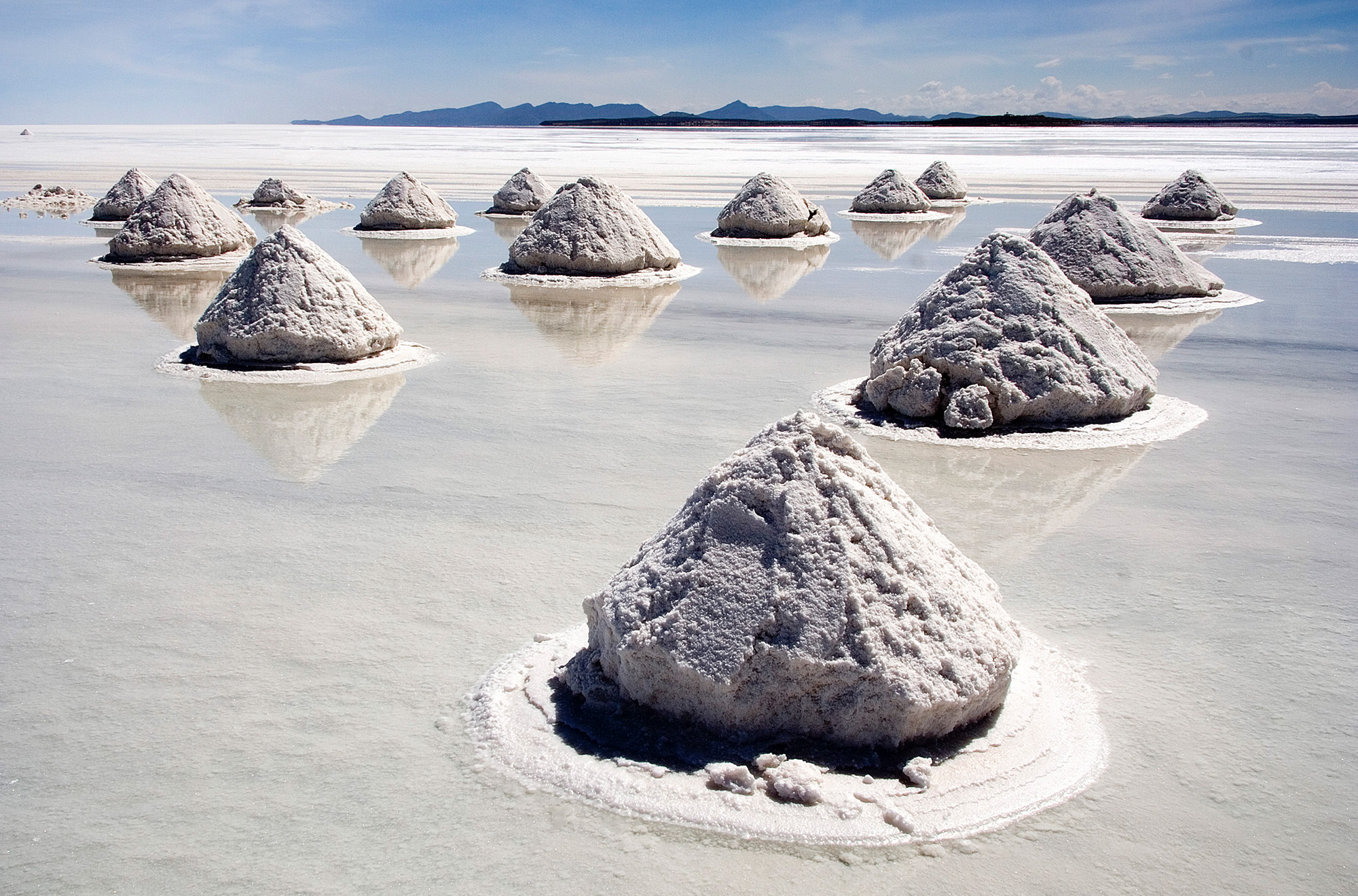 Salar is salt flat in Spanish. Uyuni originates from the Aymara language and means a pen (enclosure); Uyuni is also the name of a town that serves as a gateway for tourists visiting the Salar. Thus Salar de Uyuni can be loosely translated as a salt flat with enclosures, the latter possibly referring to the “islands” of the Salar; or as “salt flat at Uyuni (the town named ‘pen for animals’)”.

Aymara legend tells that the mountains Tunupa, Kusku and Kusina, which surround the Salar, were giant people. Tunupa married Kusku, but Kusku ran away from her with Kusina. Grieving Tunupa started to cry while breast-feeding her son. Her tears mixed with milk and formed the Salar. Many locals consider the Tunupa an important deity and say that the place should be called Salar de Tunupa rather than Salar de Uyuni.

Salt flats are ideal for calibrating the distance measurement equipment of satellites because they are large, stable surfaces with strong reflection, similar to that of ice sheets. As the largest salt flat on Earth, Salar de Uyuni is especially suitable for this purpose. In the low-rain period from April to November, due to the absence of industry and its high elevation, the skies above Salar de Uyuni are very clear, and the air is dry (relative humidity is about 30%; rainfall is roughly 1 millimetre or 0.039 inches per month). It has a stable surface which is smoothed by seasonal flooding (water dissolves the salt surface and thus keeps it leveled). As a result, the variation in the surface elevation over the 10,582-square-kilometer (4,086 sq mi) area of Salar de Uyuni is less than 1 meter (3 ft 3 in), and there are few square kilometers on Earth that are as flat. The surface reflectivity (albedo) for ultraviolet light is relatively high at 0.69 and shows variations of only a few percent during the daytime. The combination of all these features makes Salar de Uyuni about five times better for satellite calibration than the surface of an ocean. Using Salar de Uyuni as the target, ICESat has already achieved the short-term elevation measurement accuracy of below 2 centimeters (0.79 in).

With the use of modern GPS technology, it can now be proved that the Salar de Uyuni is not perfectly flat. New measurements revealed previously missed features resembling ridges, hills, and valleys only millimeters in height. They originate from the variation in material density, and thus the gravitational force, beneath the Salar’s sediments. Just as the ocean surface rises over denser seamounts, the salt flat surface also rises and falls to reflect the subsurface density variations.