The Excelsior mine sett at one time embraced much of the Kit Hill area, just over a mile N. E. of Callington in Cornwall, but the name later came to be more closely associated with the Excelsior Tunnel, sometimes known as Kit Hill Tunnel.

The tunnel was driven S. S. W. from an entrance in Deerpark Wood with the intention of intersecting the North Engine Shaft of Kit Hill Mine (situated near the stack at the summit of the hill) at a point 660 feet below the surface. This would have drained the mine around the shaft and the 3/4 mile long tunnel may have cut through a number of undiscovered tin and copper lodes that were believed to exist beneath Kit Hill. 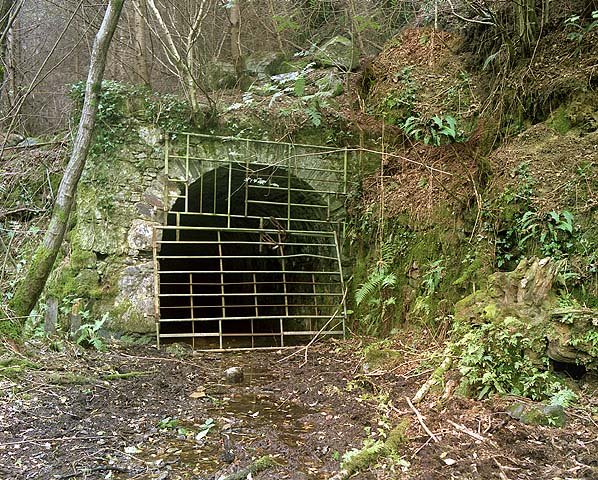 Miners began driving the 8’X 8′ tunnel in about 1880 but a shortage of funds led to the abandonment of the tunnel a few years later when it was only half way to North Engine Shaft. Work was recommenced on a smaller scale in the late 1930’s under the auspices of a local chemist and tin miner Captain George Moor. An air compressor for working rock drills was installed near the entrance, with an air line to the working face 2100 feet in, while there were hand-operated fans and their associated trunking to provide fresh air and to clear smoke from the tunnel after blasting. A single line tram road ran the length of the tunnel.

Captain Moor continued the tunnel southward for a short distance at a reduced size but it was then abandoned and attention switched to reworking the old mine dump area near the entrance for Wolfram. This dump was worked out by 1941 and a small shaft was then sunk at the southern end of the wood which yielded some wolfram. By 1942 new plant had been installed on the site and it’s recorded that at least two tons of Wolfram were recovered. The project was, however, short lived and all mining ceased by 1946. There was some further development of the shaft by New Consols Mine at Luckett in the late 1940’s or early 1950’s but when the site was visited in 1954 it was found to be abandoned and no further mining has taken place since that date. 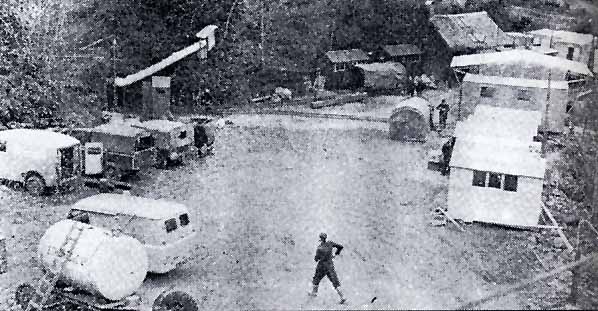 In 1959 the Excelsior Tunnel was to take on a more sinister role. In the mid 1950’s the ‘cold war’ between the Western powers and the Soviet Union was at its height but both sides were looking for a limitation to the bitter nuclear arms race. Negotiations on a test ban treaty started in 1958. As part of this treaty it was necessary to ensure that neither side was able to carry out secret undetected tests.

The negotiations were deadlocked over the effectiveness of the system for detecting surreptitious nuclear tests. American scientist Dr. J.L.Latter suggested that it should be possible to camouflage the seismic signal from the detonation of an underground explosion so that it could be missed altogether or made to appear many times smaller than it actually was.

If the ‘Latter Decoupling Theory’, as it became known, proved accurate it would become a major stumbling block in the implementation of an effective test ban treaty. Scientists in the USA and UK set to work to devise experiments to check it out. 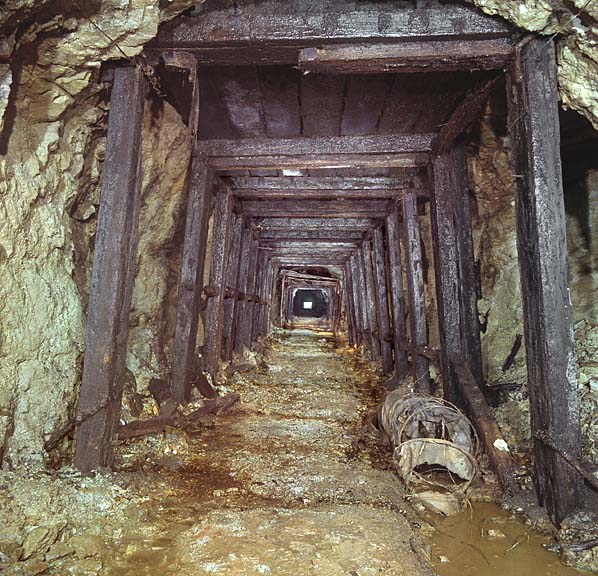 A team of geophysicists at the UK Atomic Weapons Research Establishment (AWRE) at Foulness was asked if a simple test could be carried out quickly. A small experiment was set up with two charges of explosives in a 20 feet deep bore hole in a bed of clay. The first 65 lb charge formed a large hole, and the second 2 lb charge suspended in the hole was ‘decoupled’ according to the Latter theory.

It worked – the predicted attenuation was obtained! This success provided the impetus for larger scale tests, and a group from the AWRE (Aldermaston) was put together which included the scientists from Foulness. It was headed by Dr. Iuean Maddock, Head of the Field Experiments Branch of the AWRE, who was appointed Project Superintendent in charge of the tests. 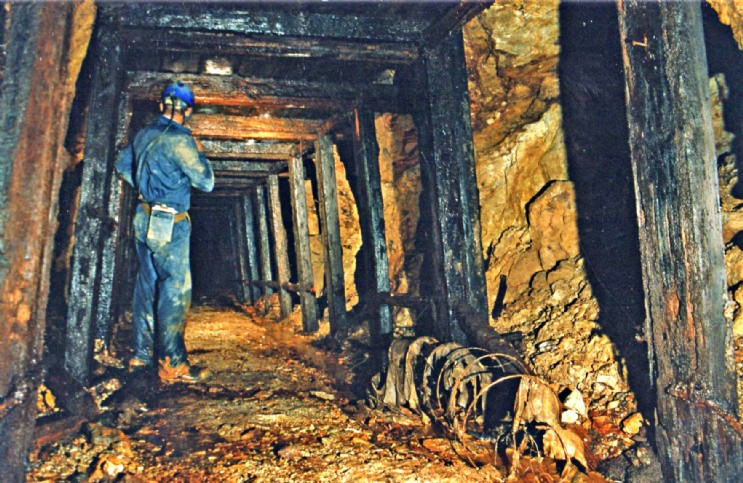 A search was made for suitable sites for the tests and the Excelsior Tunnel was selected in 1959. According to newspaper reports, a hut containing numerous instruments was erected at the tunnel mouth, 2,000 feet of narrow-gauge tramway was laid in the tunnel for an electric train carrying further instruments to run on, while giant extractors were used to clear the tunnel of smoke from the explosions. Several photographs were published, including one showing the tunnel entrance, Captain Moor’s cottage, several portable huts and new air trunking leading out of the entrance to a presumed extractor fan a few yards up the hillside to the N. W. Narrow-gauge railway lines could be seen leading into the tunnel but these may have been from Captain Moor’s time.

Phase A of Operation Orpheus involved a small charge being fired in a 6 foot diameter cavity in granite and shale at depths of 100 to 300 feet in the Excelsior Tunnel. Phase B involved participation in the Operation Cowboy tests, where charges of 3,000 lb would be detonated in 30 ft diameter cavities at depths of 800 ft in a salt mine in Louisiana, in the USA. Phase C required a 3000 lb decoupled test and a 1000 lb coupled test to be carried out at a depth of 1700 feet below ground. A new site in the UK was required for Phase C and Greenside Mine in Cumberland was selected for this role. 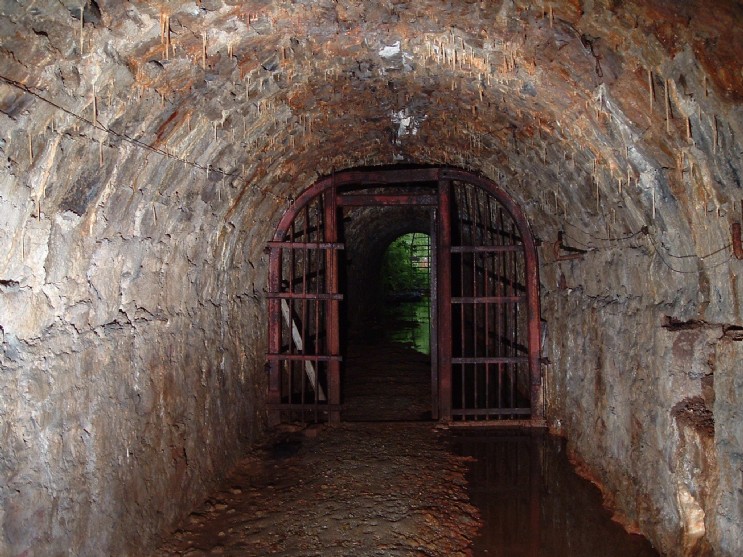 Activity at the Excelsior Tunnel ceased early in 1960 and the site was once again abandoned. There was a plan in the 1970’s to dam the entrance to the tunnel as a supplementary reservoir to supply water to local villages but nothing came of the proposal and the site has now returned to nature.

When visited in 1989 the half mile long tunnel was grilled but access was possible. The first section of the tunnel has an arched masonry lining after which the tunnel is in granite with wooden supports in areas of unstable ground. The tunnel is open for its entire length with no roof falls. There is little evidence of mining activity or the late use by the AWRE although one ventilation fan and trunking, probably from the AWRE period, still survives in a side tunnel. The tunnel is wet throughout much of its length.