The Vajont Dam (or Vaiont Dam) is a disused dam, completed in 1959 in the valley of the Vajont River under Monte Toc, in the municipality of Erto e Casso, 100 km (60 miles) north of Venice, Italy. One of the tallest dams in the world, it is 262 metres (860 ft) high, 27 metres (89 ft) wide and 22.11 metres (72 ft 6 in) thick at the base and 191 metres (627 ft) wide and 3.4 metres (11 ft 2 in) thick at the top. On 9 October 1963, during initial filling, a massive landslide caused a man-made megatsunami in the lake in which 50 million cubic metres of water overtopped the dam in a wave 250 metres (820 ft) high, leading to 1,910 deaths and the complete destruction of several villages and towns. The construction company and the Italian government initially disregarded early warning signs and reports describing the geological instability of Monte Toc on the southern side of the basin. The eventual attempt to safely control the landslide by lowering the lake level was too late. The dam remained almost intact and two thirds of the water was retained behind it, but the landslide was much larger than expected and the impact brought massive flooding and destruction to the Piave valley below. 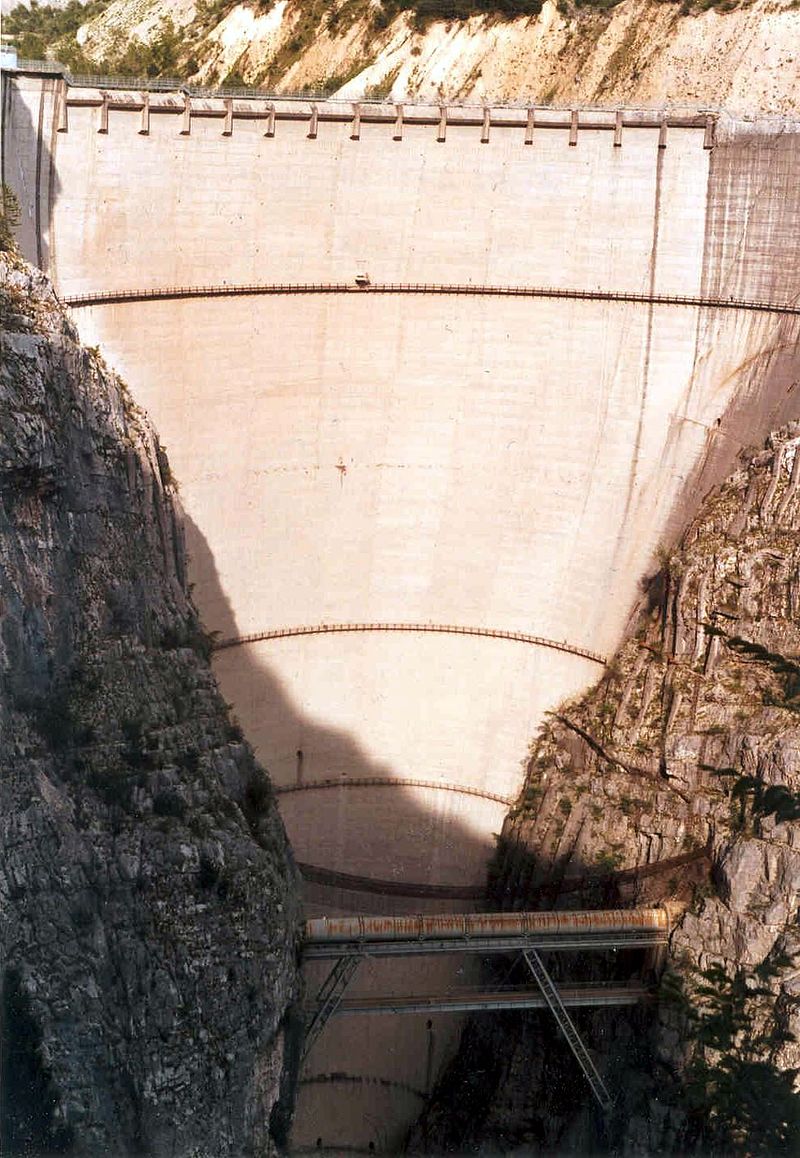 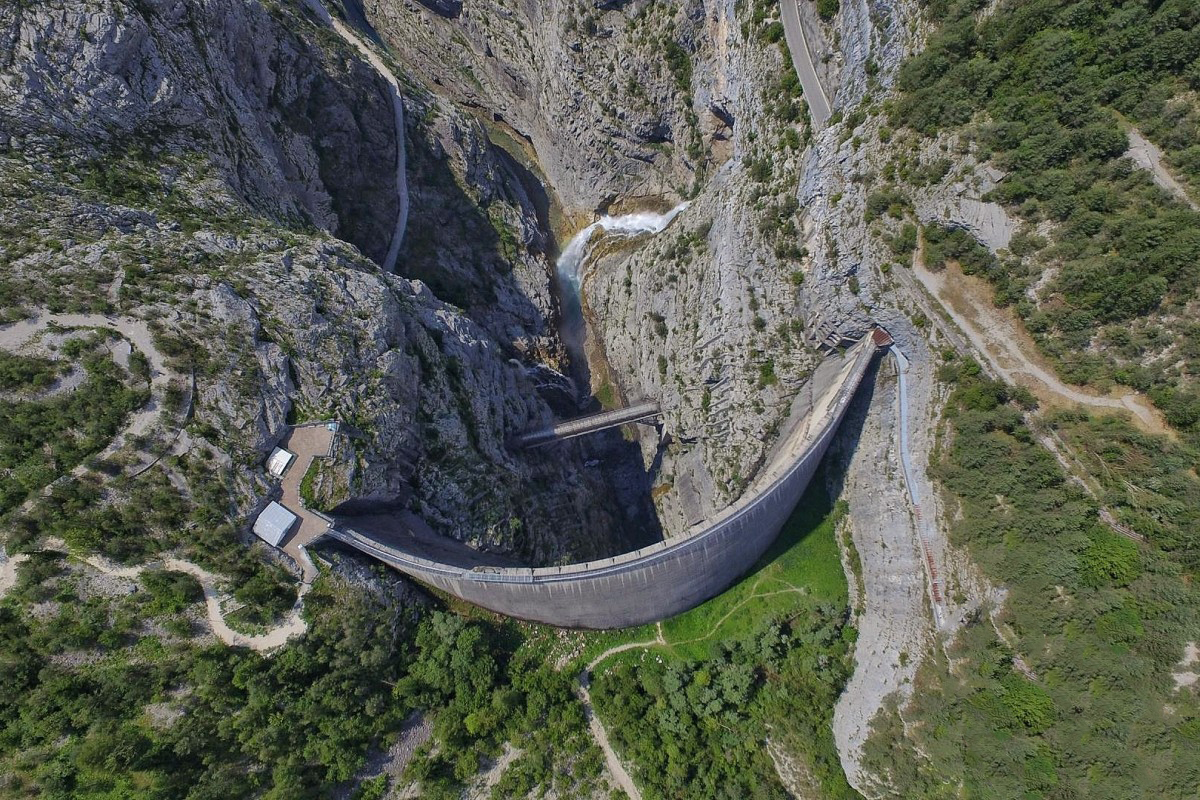 On March 22, 1959, during construction of the Vajont Dam, a landslide at the nearby Pontesei dam created a 20 meters (66 ft) high wave that killed one person. Throughout the summer of 1960, minor landslides and earth movements were noticed. However, instead of heeding these warning signs, the Italian government chose to sue at least one of the journalists reporting the problems. On 4 November 1960, with the water level in the reservoir at about 190 metres (620 ft) of the planned 262 metres (860 ft), a landslide of about 800,000 cubic metres (1,000,000 cu yd) collapsed into the lake. SADE stopped the filling, lowered the water level by about 50 metres (160 ft), and started to build an artificial gallery in the basin in front of Monte Toc to keep the basin usable even if additional landslides (which were expected) divided it into two parts. In October 1961, after the completion of the gallery, SADE resumed filling the narrow reservoir under controlled monitoring. In April and May 1962, with the basin water level at 215 metres (705 ft), the people of Erto and Casso reported five “grade five” Mercalli intensity scale earthquakes. SADE downplayed the importance of these quakes. SADE was then authorized to fill the reservoir to the maximum level. In July 1962, SADE’s own engineers reported the results of model-based experiments on the effects of further landslides from Monte Toc into the lake. The tests indicated that a wave generated by a landslide could top the crest of the dam if the water level was 20 metres (66 ft) or less from the dam crest. It was therefore decided that a level 25 metres (82 ft) below the crest would prevent any displacement wave from over-topping the dam. However, a decision was made to fill the basin beyond that, because the engineers thought they could control the rate of the landslide by controlling the level of water in the reservoir. In March 1963, the dam was transferred to the newly constituted government service for electricity, ENEL. During the following summer, with the basin almost completely filled, slides, shakes, and movements of the ground were continuously reported by the alarmed population. On 15 September, the entire side of the mountain slid down by 22 centimetres (8.7 in). On 26 September, ENEL decided to slowly empty the basin to 240 metres (790 ft), but in early October the collapse of the mountain’s south side looked unavoidable: one day it moved almost 1 metre (3.3 ft). 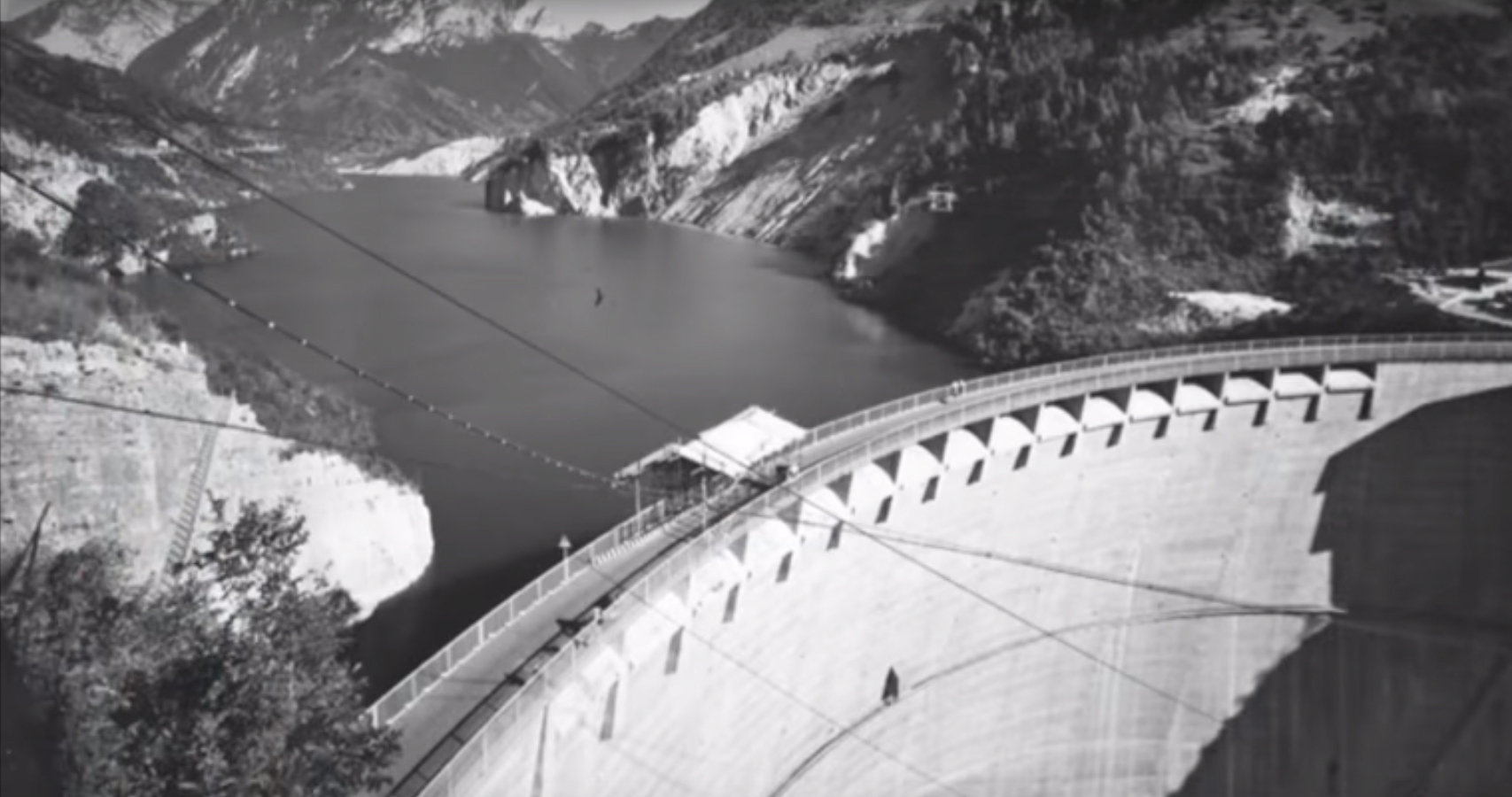 On 9 October 1963, engineers saw trees falling and rocks rolling down into the lake where the predicted landslide would take place. Before this, the alarming rate of movement of the landslide had not slowed as a result of lowering the water, although the water had been lowered to what SADE believed was a safe level to contain the displacement wave should a catastrophic landslide occur. At 10:39 p.m., a massive landslide of about 260,000,000 cubic metres (340,000,000 cu yd) of forest, earth, and rock fell into the reservoir at up to 110 kilometres per hour (68 mph), completely filling the narrow reservoir behind the dam. The landslide was complete in just 45 seconds, much faster than predicted, and the resulting displacement of water caused 50,000,000 cubic metres (65,000,000 cu yd) of water to overtop the dam in a 250-metre (820 ft) high wave. The flooding from the huge wave in the Piave valley destroyed the villages of Longarone, Pirago, Rivalta, Villanova and Faè, killing around 2,000 people and turning the land below the dam into a flat plain of mud with an impact crater 60 metres (200 ft) deep and 80 metres (260 ft) wide. Many small villages near the landslide along the lakefront also suffered damage from a giant displacement wave. Villages in the territory of Erto e Casso and the village of Codissago , near Castellavazzo, were largely wrecked. Estimates of the dead range from 1,900 to 2,500 people, and about 350 families lost all members. Most of the survivors had lost relatives and friends along with their homes and belongings. US Army helicopters and paratroopers aided in rescue efforts and bringing in relief supplies. In 300 flights they ferried out 4,000 survivors. The dam was largely undamaged, and still exists today. 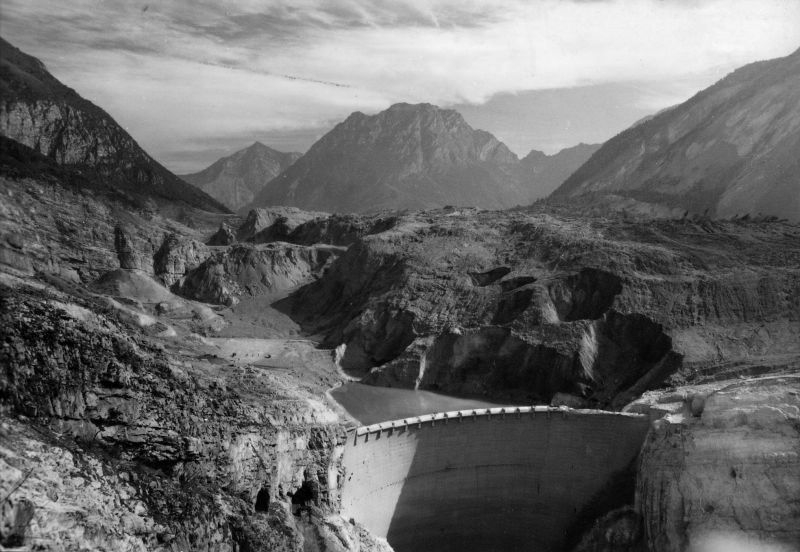 Immediately after the disaster, the government (which at the time owned the dam), politicians and public authorities insisted on attributing the tragedy to an unexpected and unavoidable natural event. The debate in the newspapers was heavily influenced by politics. The paper l’Unità, the mouthpiece of the Partito Comunista Italiano (PCI), was the first to denounce the actions of the management and government, as it had previously carried a number of articles by Tina Merlin addressing the behaviour of the SADE management in the Vajont project and elsewhere. Indro Montanelli, then the most influential Italian journalist and a vocal anti-communist, attacked l’Unità and denied any human responsibility; l’Unità and the PCI were dubbed “jackals, speculating on pain and on the dead” in many articles by the Domenica del Corriere and a national campaign poster paid for by Democrazia Cristiana (DC). The catastrophe was attributed only to natural causes and “God’s will”. The campaign accused the PCI of sending agitprops into the refugee communities, as relief personnel; most of them were partisans from Emilia Romagna who fought on Mount Toc in the Second World War and often had friends in the stricken area. Democrazia Cristiana, the party of prime minister Giovanni Leone, accused the Communist Party of ‘political profiteering’ from the tragedy. Leone promised to bring justice to the people killed in the disaster. A few months after he lost the premiership, he became the head of SADE’s team of lawyers, who significantly reduced the amount of compensation for the survivors and ruled out payment for at least 600 victims. The DC’s newspaper, La Discussione, called the disaster “a mysterious act of God’s love”, in an article that drew sharp criticism from l’Unità. Apart from journalistic attacks and the attempted cover-up from news sources aligned with the government, there had been proven flaws in the geological assessments, and disregard of warnings about the likelihood of a disaster by SADE, ENEL and the government. The trial was moved to L’Aquila, in Abruzzo, by the judges who heard the preliminary trial, thus preventing public participation, and resulted in lenient sentencing for a handful of the SADE and ENEL engineers. One SADE engineer (Mario Pancini) committed suicide in 1968. The government never sued SADE for damage compensation. Subsequent engineering analysis has focused on the cause of the landslide, and there is ongoing debate about the contribution of rainfall, dam level changes and earthquakes as triggers of the landslide, as well as differing views about whether it was an old landslide that slipped further or a completely new one. There were a number of problems with the choice of site for the dam and reservoir: the canyon was steep sided, the river had undercut its banks, and the limestone and clay-stone rocks that made up the walls of the canyon were inter-bedded with the slippery clay-like Lias and Dogger Jurassic-period horizons and the Cretaceous-period Malm horizon, all of which were inclined towards the axis of the canyon. In addition, the limestone layers contained many solution caverns that became only more saturated because of rains in September. Before the landslide that caused the overtopping flood, the creep of the regolith had been 1.01 centimetres (0.40 in) per week. In September, this creep reached 25.4 centimetres (10.0 in) per day until finally, the day before the landslide, the creep was measured at 1 metre (3.3 ft).

Most of the survivors were moved into a newly built village, Vajont, 50 km (31 mi) south-east on the Tagliamento river plain. Those who insisted on returning to their mountain life in Erto e Casso were strongly discouraged. Longarone, in the Piave valley, was rebuilt. The government used the disaster to promote the industrialization of the North-East of Italy. Survivors were entitled to ‘business start-up’ loans, public subsidies and ten years tax exemption, all of which they could ‘sell-on’ to major companies from the Venice region. These concessions were then converted into millions of lira for plants elsewhere. Among the corporations were Zanussi (now owned by Electrolux), Ceramica Dolomite (now owned by American Standard), Confezioni SanRemo, and SAVIC (now owned by Italcementi). Compensation measures did not clearly distinguish between victims and people who lived nearby; thus much of the compensation went to people who had suffered little damage, creating a negative public image. A pumping station was installed in the dam basin to keep the lake at a constant level, and the bypass gallery was lengthened beyond the dam to let the water flow down to the Piave valley. The dam wall is still in place and maintained, but there are no plans to exploit it. The dry basin, filled with landslip, has been open to visitors since 2002.