Six Flags New Orleans (SFNO) is a 140-acre, abandoned theme park in New Orleans that has been closed since Hurricane Katrina struck the state in August 2005. It is owned by the Industrial Development Board (IDB) of New Orleans. Six Flags had leased the park from 2002 until 2009, when the lease was terminated during its bankruptcy proceedings. The former park is located in New Orleans East, off Interstate 10.

Despite various announced plans to redevelop the site, as of February 2019, it is still abandoned and in poor condition. Trespassing is prohibited, and the park is patrolled for 24 hours a day by the New Orleans Police Department. Despite these deterrents, videos and photos of the site have surfaced over the years from thrill-seekers and YouTubers. As a result, city officials became more diligent in securing the park and banning tours. A drone video by WLOX shows an aerial view of the “creepy”, ghost-town-like, deserted park. 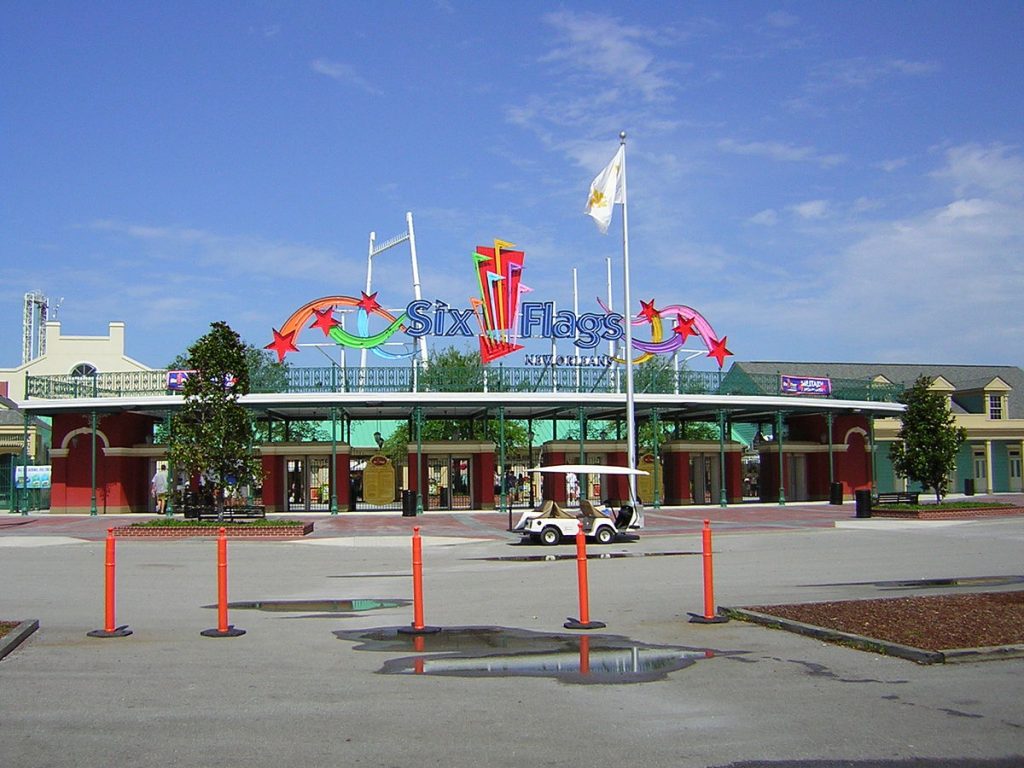 The park opened under the name Jazzland in 2000. It was operated by Alfa Smartparks (later Odgen Entertainment and now known as Palace Entertainment), but owned by a Spanish company called Parques Reunidos. Rides included Mega Zeph, a wooden roller coaster track built on a steel frame to prevent termite infestation and withstand hurricane-force winds. Mega Zeph was inspired by the old Zephyr roller coaster at the closed Pontchartrain Beach Amusement Park that was located next to Lake Pontchartrain by the University of New Orleans. The intent was to rebuild the Zephyr, but it was a smaller roller coaster, so that idea was scrapped in favor of the current larger Mega Zeph. Other rides included a junior steel coaster called Rex’s Rail Runner, a wild mouse steel coaster and a common steel shuttle looping Vekoma boomerang rollercoaster called a Zydeco Scream (there are well over a dozen of these identical coasters in parks in the US). The park had a log flume called Cypress Plunge and a splashwater falls ride called Spillway Splashout. In addition, the park had common amusement park spinning rides and a carousel merry-go-round. The park was not profitable, as Alpha Smart Parks specialized in running water parks and smaller amusement arcade centers. In 2001, the lease was put up for sale, and in March 2002 Six Flags purchased the lease, although the park’s name did not change that year.

In early 2003, Six Flags upgraded the park and renamed it “Six Flags New Orleans.” Six Flags added more shaded areas and many new flat spinning rides. The park was renamed Six Flags, and the “it’s playtime!” theme was adopted that included a dancing old man, Mr. Six. They added a Bolliger & Mabillard inverted coaster named Batman: The Ride (a mirrored version of the B&M Batman: The Ride coaster model) relocated from the defunct Thrill Valley in Japan, and a Vekoma multiple looping coaster called The Jester relocated from Six Flags Fiesta Texas. A water park that would be included in the admission (like Six Flags Parks such as Six Flags St. Louis and Six Flags America, for example) was in the planning stages in early 2005 and was going to be announced at the end of August. However, Hurricane Katrina struck New Orleans, which put those plans and the continued operations of the park in question. The last day the park operated was August 21, 2005. Weekday operations had ended a couple weeks earlier, as schools start early in August in the New Orleans area and end in mid-May. The park was scheduled to reopen on August 27 and August 28, but once Katrina was forecast late on Friday, August 26 to directly hit New Orleans, the weekend opening was cancelled in order to prepare for the storm and begin evacuations. 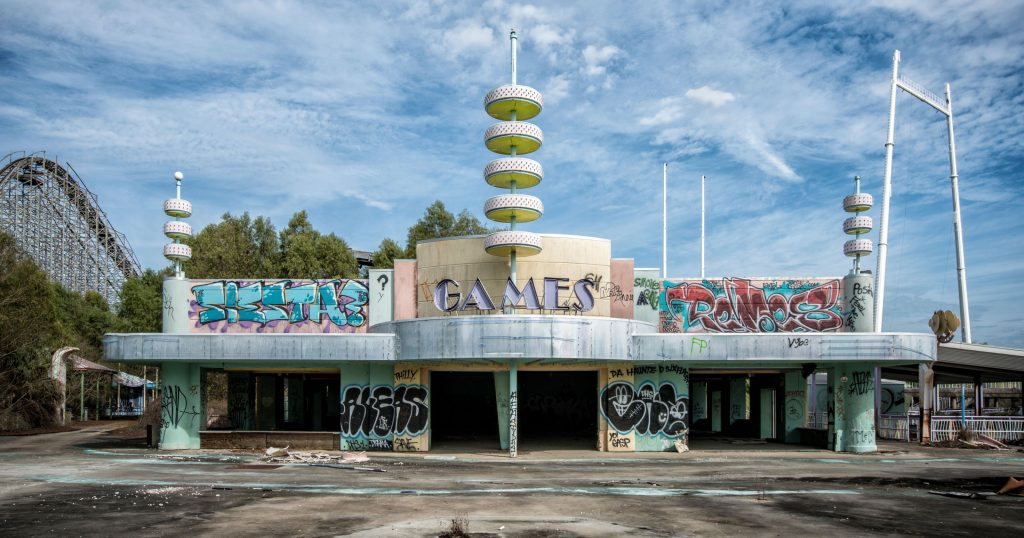 The park grounds are located on a low-lying section of Eastern New Orleans, with a 6-foot (1.8 m) earthen flood berm running along the perimeter, creating an artificial basin. As such, this area was heavily flooded in 2005 in the aftermath of Hurricane Katrina. After the park’s drainage pumps failed during the storm, the berm retained the combination of rainwater and sea water overflow from Lake Pontchartrain caused by Katrina’s massive storm surge, submerging the entire park grounds in corrosive, brackish floodwater to a depth of 4 to 7 feet (1.2 to 2.1 m) for over a month. Due to the extensive water and wind damage received, the park was closed indefinitely without plans to reopen.

Initial damage reports by Six Flags inspectors stated that the park buildings were 80% demolished, all of the flat rides (except for one which was being serviced off-site at the time of the storm) were effectively destroyed by long term salt-water immersion and both the wooden track and steel superstructure of the Mega Zeph were likely damaged beyond repair. The only large ride to escape relatively unscathed was the Batman: The Ride roller-coaster, due to its elevated station platform and corrosion-resistant support structure.

On July 1, 2006, having announced that the park would be closed “at least” through 2007, Six Flags announced that it had concluded its damage assessments and declared the park to be an “effective total loss”—with no desire or intent by the company to undertake the prohibitive cost of rebuilding—and was in negotiations with the City of New Orleans to make an early exit from the 75-year lease which Six Flags entered into on the property in 2002. However, then-Mayor Ray Nagin said he planned to hold Six Flags to the lease agreement and force them to rebuild. If held to the terms of the lease agreement, Six Flags would have been legally obligated to rebuild the park on the same site, but only to the extent of the insurance money Six Flags received. Six Flags determined the value of assets destroyed by the storm at $32.5 million. As of September 2006, Six Flags had collected $11.5 million of insurance proceeds, bringing the insurance receivable balance to $24.4 million. In January 2007, Six Flags officials revealed to the New Orleans Times-Picayune that the company was suing its insurers for the remaining $17.5 million in coverage.

The park had been one of the least profitable parks in the Six Flags portfolio, being well away from the French Quarter and other tourist attractions. It has been stated that the park would most likely have been more profitable had it been built somewhere on the West Bank or in Metairie, as these places are a shorter distance from tourist districts. These potential locations would have placed the park much closer to affluent population centers where a strong local base of repeat customers could be cultivated, as opposed to poverty- and crime-afflicted New Orleans East where few residents could afford or were interested in expensive season passes to the theme park. 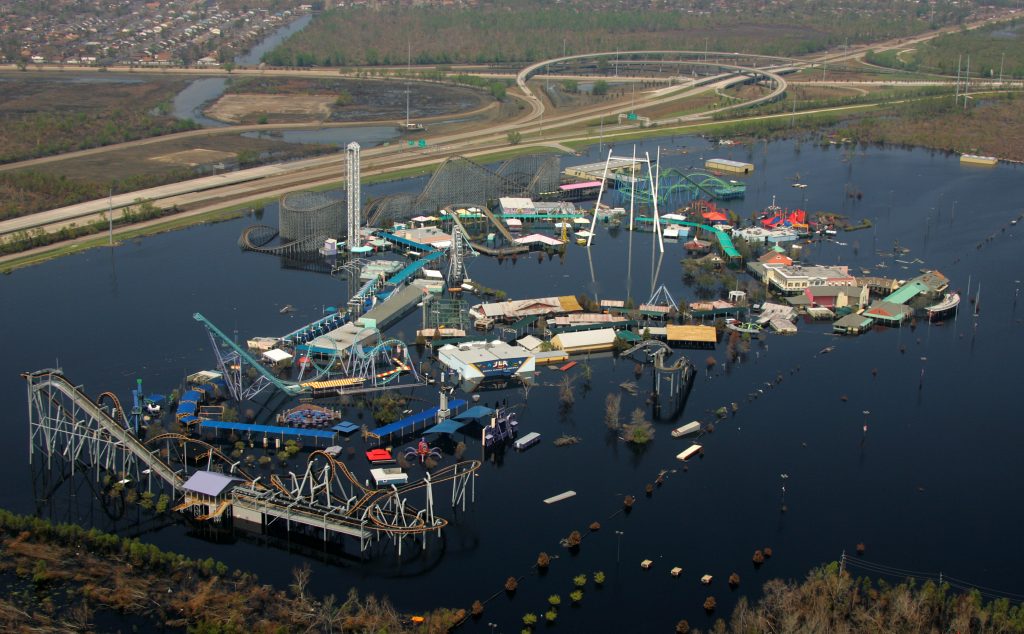 On December 15, 2006, Six Flags confirmed that it was removing Batman: The Ride for refurbishment and relocation to a new park, as it was considered to be the only salvageable ride. Batman: The Ride was reassembled at Six Flags Fiesta Texas in San Antonio and opened under the new name Goliath on April 18, 2008. In addition to Batman: The Ride, Six Flags removed shade coverings, ride parts, lights, security cameras, planting structures and various other salvageable items.

Besides Batman: The Ride, other rides were later removed from the park. Bayou Blaster and Sonic Slam were removed in 2008 and taken to Great Escape in Queensbury, New York, where the ride was refurbished and reopened under the name Sasquatch on May 10, 2009. The Road Runner Express was removed in 2009 and taken to Six Flags Magic Mountain in Valencia, California, where it was refurbished and reopened on May 28, 2011 under the same name.

As late as the fall of 2009, the Six Flags website said the company was “still in the process of settling claims with its insurers due to substantial damage caused by Hurricane Katrina,” adding that the park would remain closed. The statement ended with “We know that it is still a difficult time for the residents of New Orleans and we remain committed to working with the city in support of the recovery efforts.”