The National Monument of Scotland, on Calton Hill in Edinburgh, is Scotland’s national memorial to the Scottish soldiers and sailors who died fighting in the Napoleonic Wars. It was intended, according to the inscription, to be “A Memorial of the Past and Incentive to the Future Heroism of the Men of Scotland”.

The monument dominates the top of Calton Hill, just to the east of Princes Street. It was designed during 1823-6 by Charles Robert Cockerell and William Henry Playfair and is modelled upon the Parthenon in Athens. Construction started in 1826 and, due to the lack of funds, was left unfinished in 1829. This circumstance gave rise to various nicknames such as “Scotland’s Disgrace”, “Edinburgh’s Disgrace”, “the Pride and Poverty of Scotland” and “Edinburgh’s Folly”. 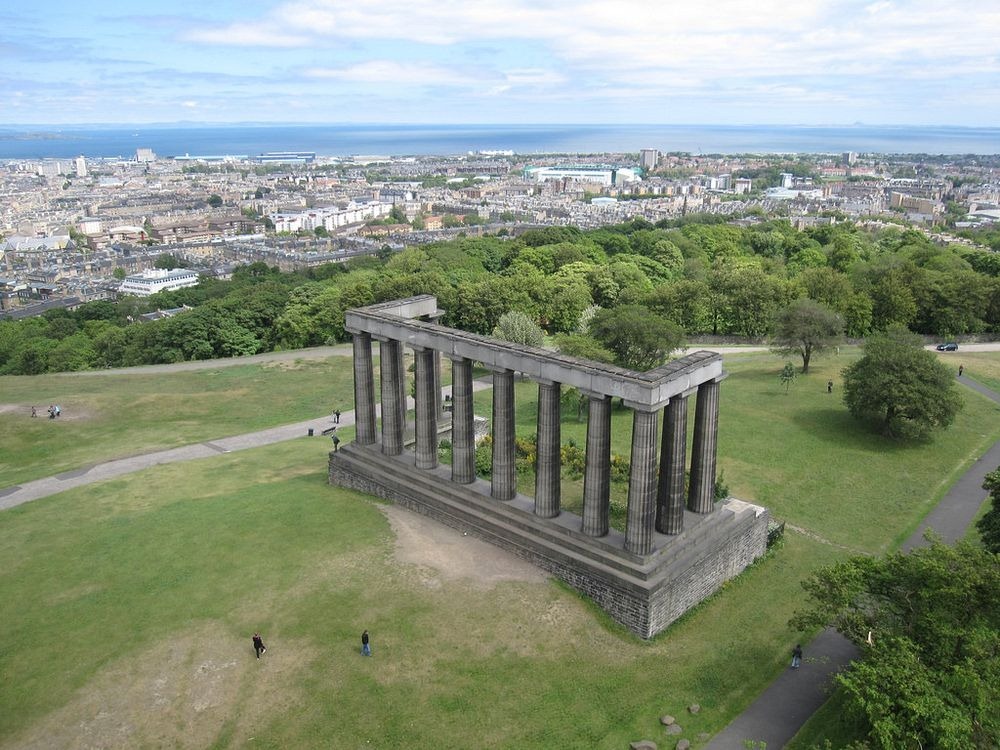 As early as 1816, the Highland Society of Scotland called for the construction of a national monument to commemorate the fallen in the Napoleonic Wars. Initially The Mound was considered as a site, but was rejected in favour of Calton Hill.

In January 1822, a proposal was put forward to ‘erect a facsimile of the Parthenon’ at a cost of some £42,000. The appeal found support amongst many prominent Edinburgh residents such as Sir Walter Scott, Henry, Lord Cockburn and Francis, Lord Jeffrey. In July 1822 the Royal Ass of Contributors to the National Monument of Scotland was incorporated by an Act of Parliament. The foundation stone was laid, amid great pomp and ceremony, the following month. 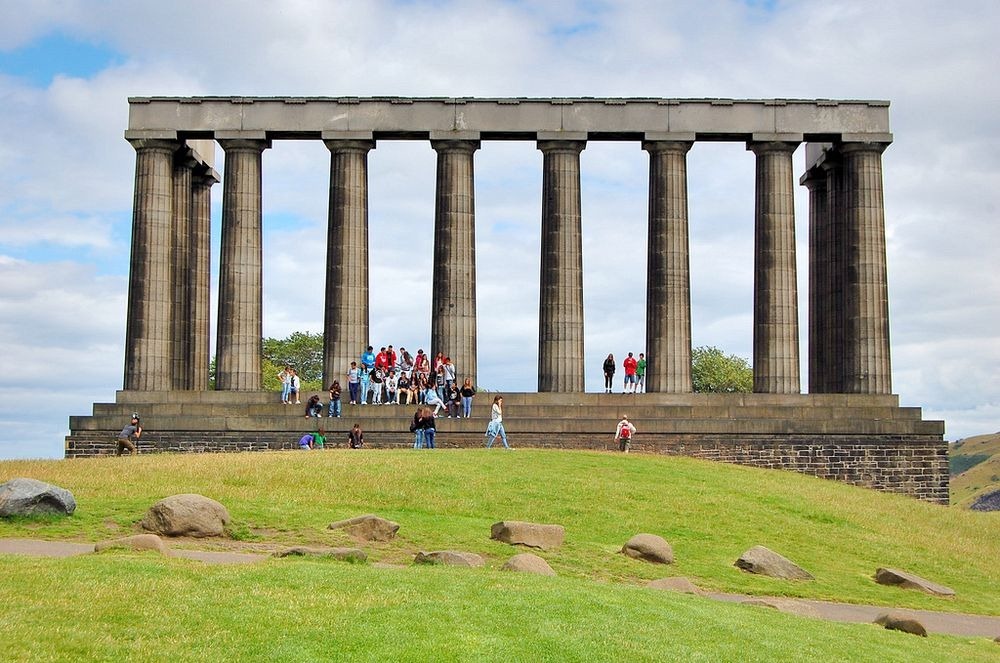 Drawing of the front elevation of the Western Portico of the National Monument of Scotland, by William Henry Playfair, dated 1826, Sixteen months after the initial appeal, only £16,000 had been found with the possibility of a £10,000 grant from Parliament. In 1826, the building was finally commissioned and work began. The builder contracted to execute the work was Messrs William Wallace & Son.

Originally, the building was planned to have extensive catacombs in the area supporting the main structure, to provide a burial place for significant figures, intended as a “Scottish Valhalla”. A minute of the Royal Association in 1826 stated that the building was:

To adopt the Temple of Minerva or Parthenon of Athens, as the model of the Monument, and to restore to the civilised world that celebrated and justly admired edifice, without any deviation whatever, excepting the adaptation of the sculpture to the events and achievements of the Scottish Heroes, whose prowess and glory it is destined to commemorate and perpetuate, and part of which monument or building must, in terms of the said Act, be appropriated as a church or place of Divine worship, to be maintained in all time coming by the said Association. 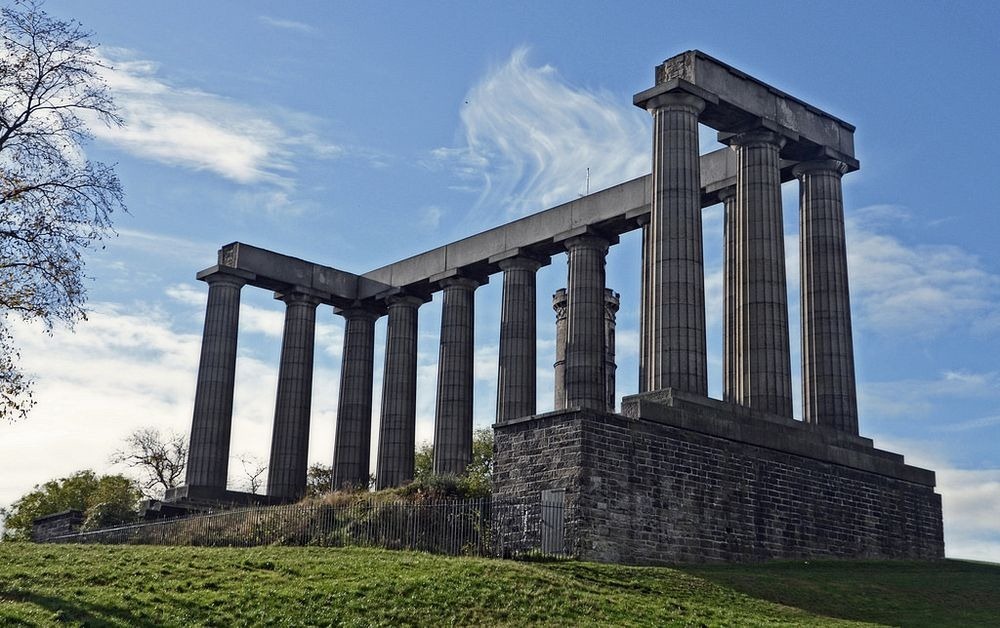 The foundation stone, which weighs 6 tons, was laid on 27 August 1822, during the visit of George IV to Scotland.

The Duke of Hamilton (the most senior non-royal Scottish noble and the Grand Master of Scotland) led a procession of masonic lodges, royal commissioners and other dignitaries from Parliament Square to the top of Calton Hill. The procession was escorted by the Scots Greys and the 3rd Dragoons.

The deposition of the inscription plates in the stone was accompanied by cannon salutes from Edinburgh Castle, Salisbury Crags, Leith Fort and the royal squadron on Leith Roads. 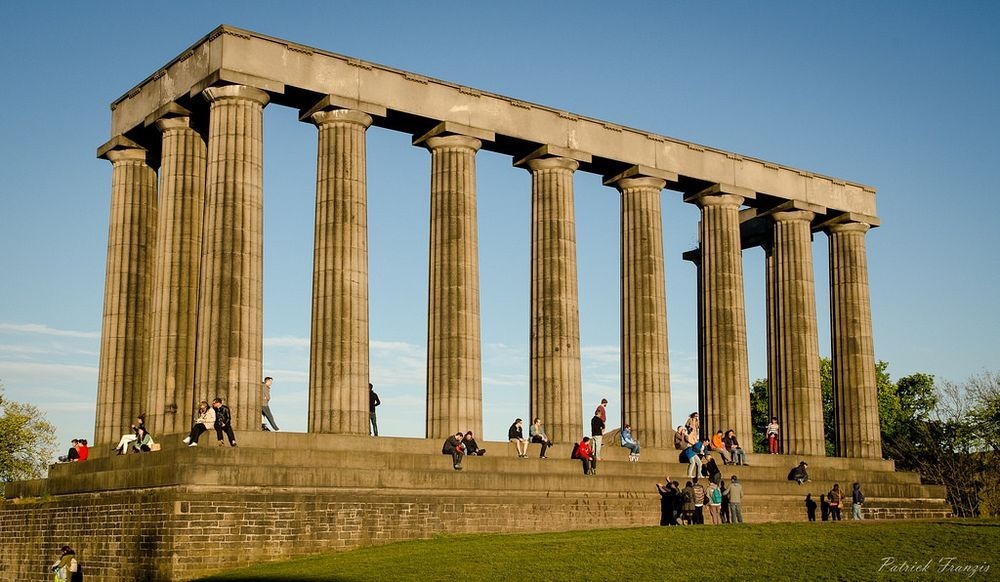